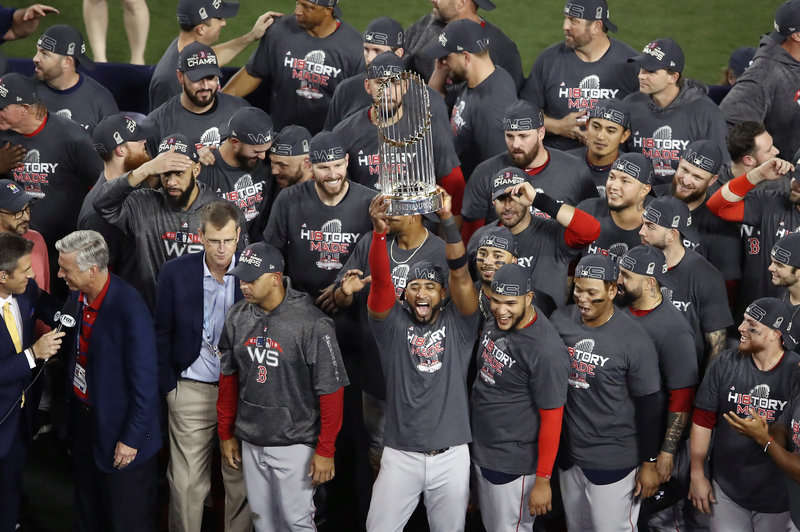 The Boston Red Sox celebrate their 5-1 victory over the Los Angeles Dodgers in Game 5 to win the 2018 World Series at Dodger Stadium on Sunday night. Ezra Shaw/Getty Images

The Boston Red Sox just capped a dominating season with their fourth World Series in 15 years.

Heading into Sunday night’s Game 5, the Los Angeles Dodgers needed a win to stall Boston’s chances at this year’s title.

But Boston, led by David Price’s pitching and Steve Pearce’s batting, ruled the road turf to take home their ninth World Series title — and their fourth since 2004.

It came as no surprise when Pearce was crowned MVP at the post-game ceremony. At the top of the first inning, the right-hander gifted the Red Sox an early lead with a two-run home run on the sixth pitch from star Dodger pitcher Clayton Kershaw.

Betts emerged from his Game 5 hibernation to launch his first career postseason home run. The Red Sox star got a solo home run off of a fly ball — that a Dodgers fan, equipped with a mitt, couldn’t even snatch — bumping Boston’s lead to 3-1.

J.D. Martinez stepped up in the seventh inning with a solo homer that took the Red Sox lead to 4-1. Pearce nailed his second homer in the eighth inning to put his team at its series-winning score.