Boston Bombing: 5 Things To Know About The Tsarnaev Trial 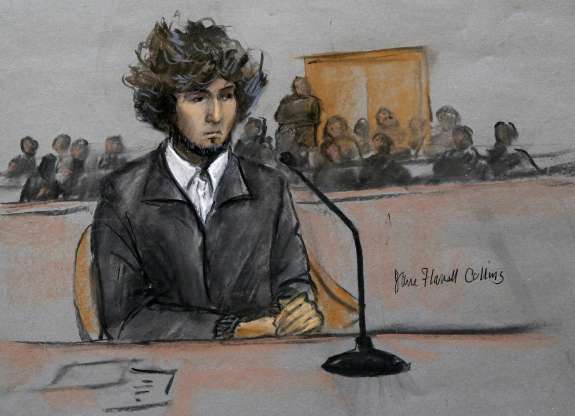 Jury selection begins today in the trial of Dzhokhar Tsarnaev, who is accused of planting a bomb near the finish line of the Boston Marathon in 2013, killing three and injuring more than 260.

Tsarnaev is facing 30 charges, including using a weapon of mass destruction. More than half those counts could result in the death penalty.

With that, here are five things you should know about the trial:

NPR’s Tovia Smith reports prosecutors have amassed a trove of evidence linking Tsarnaev to the bombings. That’s why Northeastern University law professor Daniel Medwed says, “This case is not about guilt.”

“In my mind,” Medwed adds, “this case is really about whether or not he’s going to get the death penalty.”

2. Influenced By His Brother:

CBS News reports on the defense strategy in the case:

“The defense has implied in court documents and motions it plans to show Tsarnaev was under the psychological control of his older brother, Tamerlin.

“‘What this defense wants to show is whether or not this was a young man who was influenced and under the influence of his older brother who was the master mind,’ CBS News legal analyst Rikki Klieman said.”

Remember, Tamerlin was killed in a shootout with police.

USA Today explains that jury selection is perhaps the most complicated part of this case. The paper reports:

“‘This jury selection process is going to be like very few others in a federal criminal case,’ said Jeremy Sternberg, a former federal prosecutor who is a partner at Holland & Knight in Boston. ‘It’s going to take a very long time. … Its importance cannot be overstated.’

“The scale of the attack was so vast that every potential juror could already know the case on a personal level. It was the largest act of terrorism in Boston’s history, and its effects rippled across the region. The bombings left three people dead, injured more than 260 and led to at least 16 people having limbs amputated. The ensuing five-day manhunt climaxed with a daylong, citywide shutdown before Tsarnaev was captured hiding in a backyard boat.”

One big complicating factor: Everyone who was stuck at home that day could be considered a victim.

Because of that 1,200 people are in the jury pool.

4. Most In Boston Don’t Favor The Death Penalty:

“The poll, conducted Sept. 5 through Sept. 12, showed that 57 percent of respondents support a life sentence for Tsarnaev, compared with 33 percent who favor the death penalty. Although capital punishment is barred in Massachusetts, Tsarnaev has been indicted on federal charges, including using weapons of mass destruction, that could bring the death penalty.”

NPR member station WBUR has put together a “who’s who” of the Tsarnaev trial.

They have short bios on everyone from Tsarnaev’s sisters, Ailina and Bella, to defense attorney Judy Clarke, who helped spare Unabomber Ted Kaczynski and Atlanta Olympics bomber Eric Rudolph the death penalty.