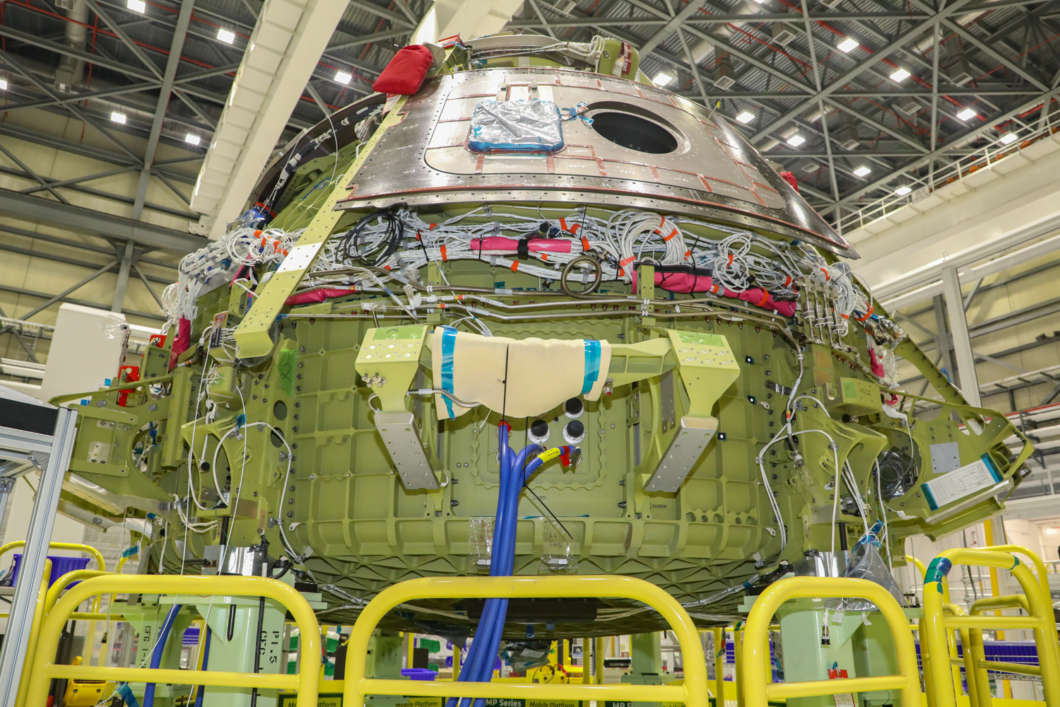 A look at the Starliner that will soon fly the uncrewed Orbital Flight Test soon after the dome mate activities at the Boeing Commercial Crew and Cargo Processing Facility at the Kennedy Space Center. Photo: Boeing

Boeing is delaying the test launch of a space capsule that will soon ferry NASA astronauts to the International Space Station. The company blames a scheduling conflict.

NASA is partnering with private companies Boeing and SpaceX to ferry astronauts to the space station. The nearly $6 billion program will end NASA’s reliance on Russia for rides to the station and will mark the first human launches from the U.S. since the end of the shuttle program in 2011.

SpaceX completed a critical milestone test last month, launching and uncrewed capsuled called Crew Dragon to the space station. After docking, the capsule spent about a week at the station before splashing down in the Atlantic Ocean.

Boeing was planning to launch the Starliner in April on a similar mission, but now it’s delayed at least four months and will target a launch in August. The Starliner is hitching a ride to space on ULA’s Atlas V rocket, but because of other launches scheduled for ULA this summer there was a limited opportunity to get Starliner on the launchpad.

“In order to avoid unnecessary schedule pressure, not interfere with a critical national security payload, and allow appropriate schedule margin to ensure the Boeing, United Launch Alliance and NASA teams are able to perform a successful first launch of Starliner, we made the most responsible decision available to us and will be ready for the next launch pad availability in August,” said a Boeing spokesperson in an email to WMFE.

ULA is scheduled to launch the AEHF-5 satellite for the Air Force in June. “The potential for schedule changes surrounding critical national security missions has been known and accepted by all parties associated with the Commercial Crew Program since the beginning,” said a ULA spokesperson.

After the uncrewed test flight launches, Boeing will test the capsule’s abort system before launching a crew of  NASA astronauts Nicole Mann and Mike Fincke along with Boeing astronaut Chris Ferguson on a test flight at the end of 2019. That test flight was scheduled to spend only a few days docked to the station but because of the delays, NASA said it will extend the mission.

“NASA’s assessment of extending the mission was found to be technically achievable without compromising the safety of the crew,” said Phil McAlister, director of the commercial spaceflight division at NASA Headquarters.

The trio of astronauts is training for an extended mission, including planned spacewalks for the two NASA astronauts.

Meanwhile, a SpaceX spokesperson says a critical test of its abort system is scheduled for June, followed by a launch of NASA astronauts Doug Hurley and Bob Behnken on a human test flight in July.