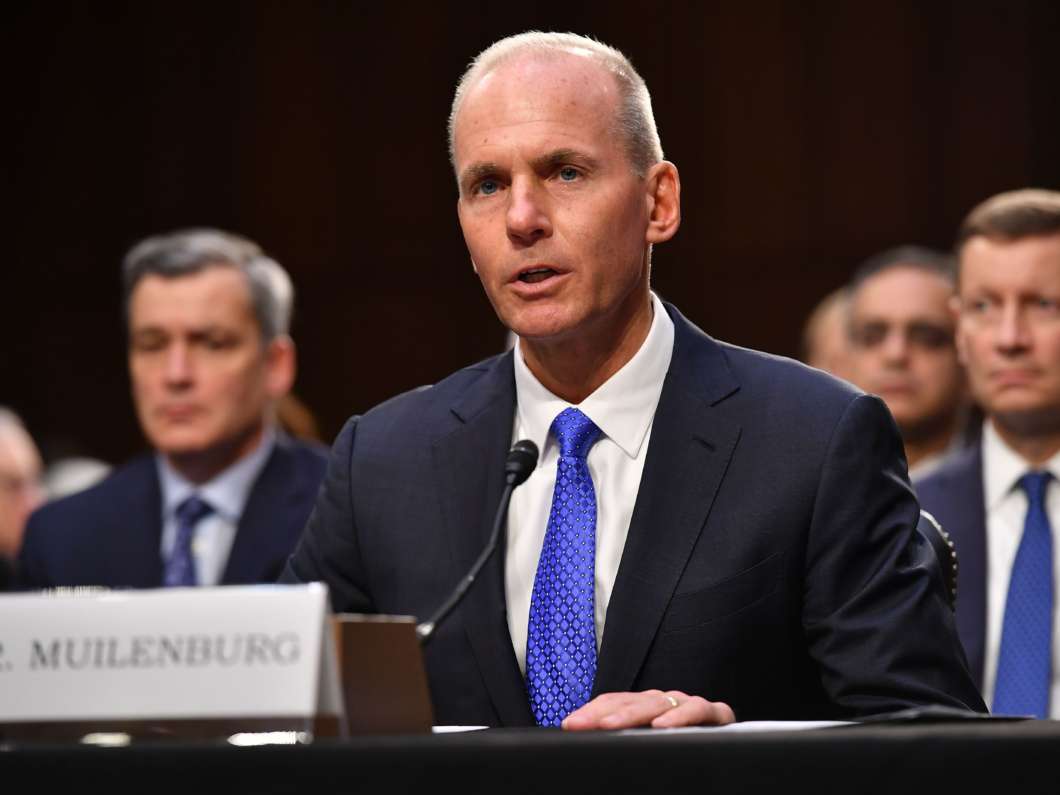 The CEO of Boeing says he considered stepping down in the aftermath of two 737 Max plane crashes in the last year that killed 346 people, but he says he is committed to staying on and seeing the giant defense and aerospace company through one of the worst crises of its century-long existence.

“I think it’s fair to say I’ve thought about it,” Boeing chief executive Dennis Muilenburg said Wednesday at a business conference. “But to be frank, that’s not what’s in my character. I don’t see running away from a challenge, resigning, as the right solution.”

Muilenburg’s comments come after he and his company faced criticism from lawmakers in two congressional hearings last week on Boeing’s role in the deadly plane crashes in Indonesia Oct. 29, 2018, and in Ethiopia on March 10 of this year. In his testimony, Muilenburg acknowledged Boeing made mistakes in the design and development of flight control system on the 737 Max that contributed to the crashes, and subsequent missteps in how the company responded to the crashes.

“They happened on my watch,” says Muilenburg of his reasons for staying put. “And I feel obligated, I feel responsible to stay on it, to work with the team to fix it, to see it through.”

Muilenburg says he is giving up his bonuses this year as the company struggles regain public confidence in the aftermath of the 737 Max crashes.

The CEO took home more than $23 million in salary and bonuses last year. But this year, Muilenburg says he’s asked Boeing’s board of directors to waive his bonuses.

Speaking Wednesday at the New York Times’ Dealbook conference, Muilenburg said he felt “a sense of responsibility … and conveying to our team, to all of our customers, to the families (of crash victims), that to me, it’s not about the money. It’s about the importance of what we do and our commitment to safety as a company.”

Muilenburg met with family members of some of those killed in the two crashes last Tuesday evening, in between the Senate and House committee hearings. He says he’s “heartbroken” by their stories of the losses they’ve suffered, adding, “I wish I had gone to visit them earlier,” he said.

In congressional hearings last week, some lawmakers ripped into Muilenburg for his high salary and multi-million dollars worth of stock options and bonuses, and for at that point, not offering to give up any of that lucrative compensation.

“What does accountability mean? Are you taking a cut in pay?” Rep. Steve Cohen, D-Tenn., angrily asked Muilenburg. “Are you working for free from now on till you can cure this problem?”

Pointing to the family members of some of those killed in the 737 Max plane crashes sitting in the gallery, Cohen continued to scold the CEO. “These people’s relatives are not coming back. They’re gone. And you won’t take a pay cut? Are you giving up any money?”

In an interview with CNBC Tuesday, Boeing Board Chairman David Calhoun said that exchange affected Muilenburg.

“Dennis was very uncomfortable in that situation,” Calhoun said of the exchange during the House Transportation Committee hearing. Calhoun says Muilenburg listened “to every story that the victims families presented to him, changed him for life. Now he’s got it in his core, and in his bones. It’s had a tremendous impact.”

Calhoun says the Board still has full confidence in Muilenburg. “From the vantage point of our board,” he said, “Dennis has done everything right.”

That comment doesn’t set well with some families of crash victims.

“His words are simply an insult to humanity,” says Paul Njoroge, whose wife, three small children and mother-in-law all were killed in the Ethiopian Airlines crash on March 10.

“How can he dare say that (Muilenburg) did ‘everything right’ while it’s so apparent that the company executives knew about” the flawed design of the flight control system that contributed both crashes. Njoroge adds, “Calhoun’s words were disrespectful to me, and to all the flying public.”

As for Muilenburg’s comments that he is “heartbroken” after meeting with some families, those words, too, ring hollow.

“He is exploiting and marketing the meeting with families for Boeing’s gain,” says Michael Stumo, whose 23-year old daughter Samya was killed in the Ethiopian crash.

Stumo says the claim Muilenburg spent “a few hours with the families” is “untrue. He spent a fraction of that time with just a few families with no effort to reach out to other families.”

Stumo went on to criticize Muilenburg for not explaining why the company “failed to fix the self-hijacking 737 MAX 8 after the Indonesian crash when they had clear knowledge of the problem. They hid it from pilots, failed to fix it … (and) as a result, my daughter died. Muilenburg must resign. He is not a leader, but an actor shielding his company from accountability.”