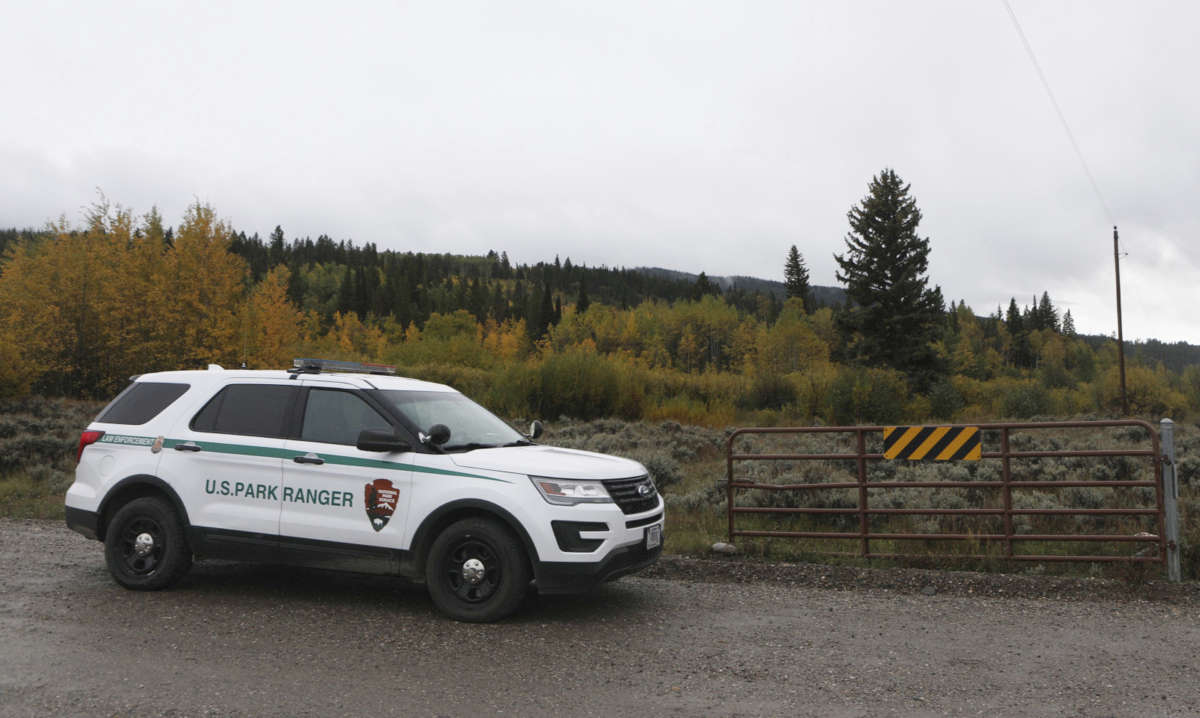 A U.S. Park Ranger vehicle drives in the Spread Creek area in the Bridger-Teton National Forest, just east of Grand Teton National Park off U.S. Highway 89, on Sunday, in Wyoming. Authorities say they have found a body believed to be Gabrielle "Gabby" Petito, who went missing on a trip with her boyfriend.
Image credit: Amber Baesler

The FBI said the body was found by law enforcement agents who had spent the past two days searching campgrounds.

The cause of death has not yet been determined, said FBI Supervisory Special Agent Charles Jones.

“Full forensic identification has not been completed to confirm 100% that we found Gabby, but her family has been notified,” Jones said. “This is an incredibly difficult time for (Petito’s) family and friends.”

An attorney who has been acting as a spokesman for the Petito family could not be reached immediately for comment.

An undeveloped camping area on the east side of Grand Teton bordering national forest land will remain closed until further notice while the investigation continues, Jones said.

Jones said investigators are still seeking information from anyone who may have seen Petito or Laundrie around some camping sites located on Grand Teton National Park’s eastern boundary, the same site that was the subject of law enforcement search efforts over the weekend.

Petito and her boyfriend, Brian Laundrie, left in July on a cross-country trek in a converted van to visit national parks in the U.S. West. Police said Laundrie was alone when he drove the van back to his parents’ home in North Port, Florida, on Sept. 1.

Laundrie has been identified as a person of interest in the case. He was last seen Tuesday by family members in Florida.

More than 50 law enforcement officers on Sunday started a second day of searching for Laundrie at the more than 24,000-acre (9,712-hectare) Carlton Reserve in Sarasota County, Florida, a wildlife area with more than 100 miles (160 kilometers) of trails, as well as campgrounds.

Petito’s family had been pleading for the Laundrie family to tell them where their son last saw her. Petito and Laundrie were childhood sweethearts who met while growing up on Long Island, New York. His parents later moved to North Port, about 35 miles (55 kilometers) south of Sarasota.

The couple’s trek in the Ford Transit van began in July from Long Island. They intended to reach Oregon by the end of October according to their social media accounts, but Petito vanished after her last known contact with family in late August from Grand Teton National Park in Wyoming, authorities said.

Police video released by the Moab Police Department in Utah showed that an officer pulled the van over on Aug. 12 after it was seen speeding and hitting a curb near the entrance to Arches National Park. The body cam video showed an emotional Petito, who sat inside a police cruiser while officers also questioned Laundrie.

Ultimately Moab police decided not file any charges and instead separated the couple for the night, with Laundrie checking into a motel and Petito remaining with the converted sleeper van.