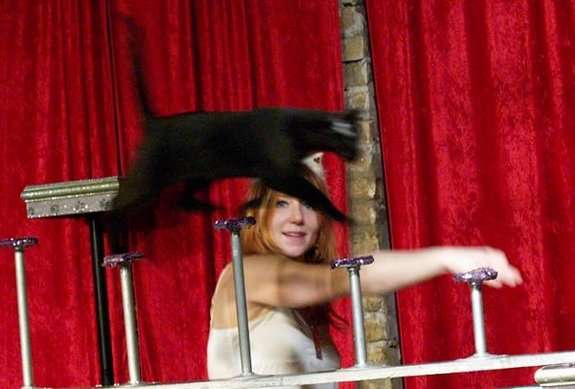 There’s a public race in Lake Eola… like in the Lake! People will be peddle-pushing those giant Swan Boats to find the city’s Grand Champion of Swan Boat peddle pushing. The fun happens tomorrow at 8 in the morning which is way too early but okay whatever.

Tonight, tomorrow & Sunday are your final chances to see high-flying felines at The Famous CatCircus called The Acro-Cats. Yes, a cat circus. The one-hour show features over a dozen fabulous felines (all former orphans, rescues, and strays) walking tightropes, pushing carts, skateboarding, jumping through hoops, ringing bells, balancing on balls and turning on lights. This cacophony or ridiculousness takes place at The Venue in Ivanhoe Village.

The Orlando Regional Youth Robotics Competition is today and tomorrow with 64 teams from the U.S. and abroad in an engineering challenge using student-built 120-pound robots in fast-paced 2 1/2 minute matches played on a 60-foot playing field. Admission is free and it goes down at CFE Arena.

Three Evitas will play Evita in Boone High School’s production of Evita Saturday and Sunday. The way I want it to go down is all three actresses play the role at the exact same time, side by side for the entire show. But, sadly, they’re just making one play young Evita, one play older Evita and one play dying dramatic Evita. Either way, this will be fun to watch because its high school theatre! As always, #Orlando is Wonderful!