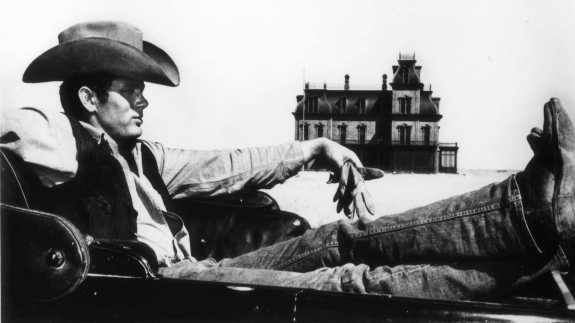 Levi's didn't even call them "jeans" until after James Dean wore them. Would he have preferred stretch fabrics and elastic waistbands?

The AP says that the nation’s devotion to denim is wearing thin. Sales fell a significant 6 percent over the last year after decades of steady growth, according to the market research firm NPD Group.

Seems the nation is leisurizing its pants, bypassing the dungarees and choosing elastic waistbands and sweats instead. Sales of yoga pants and other active wear climbed 7 percent in the same period.

They still account for 20 percent of department store sales, says retail consultants Customer Growth Partners, but blue jeans haven’t hit the skids this hard since Marlon Brando and James Dean made them famous in the 1950s.

Blue jean sales last dropped 12 years ago, falling about 3 percent when khakis made a comeback, says NPD analyst Marshal Cohen. Sales also declined 3-4 percent in the mid-’70s, when consumers turned to briefly to corduroys, according to NPD estimates.

But the “athleisure” trend could be blue jeans’ biggest threat, says Amanda Hallay of LIM College in Manhattan, coming not just from consumers’ fickle fashion tastes but an entire lifestyle change. Companies are lowering dress codes, telecommuters enjoy casual days at home and standards for appropriate attire are shifting throughout society.

“Everyone wants to look like they’re running to the gym, even if they’re not,” Hallay says.

Blue jeans’ fade could also be due to a lack of new styles since brightly colored skinnies hit the market several years ago, a trend that doesn’t work for most body types, says Maggie Serota of the online journal Death and Taxes.

Skinnies “were only flattering on people with 2-percent body fat and felt like they were squeezing your internal organs into a vise,” Serota writes. “By comparison, yoga pants feel like stepping into a warm hug.”