Black Lives Matter Mural Goes Up Near Lake Eola: “If We Can Write it on the Streets, Perhaps We Can Burn it Onto Our Collective Souls to Fight for Justice” 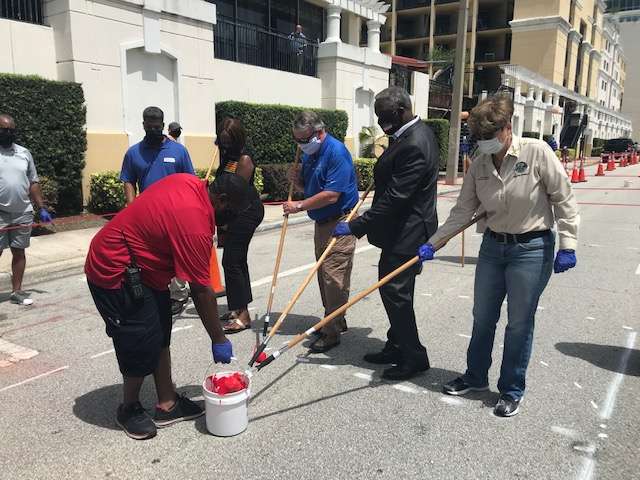 Local leaders and children from the Parramore Kidz Zone and City of Orlando summer camps painted a Black Lives Matter mural on Rosalind Avenue in front of Lake Eola in downtown Orlando Friday.

Demings says the Black Lives Matter movement is about more than the demonstrations which erupted nationwide after the death of George Floyd in Minneapolis last month.

“The movement has to be about a lifetime of commitment to stay in the fight. It is a fight, but I am highly encouraged that we live in the kind of community that we can come together out of the crisis stronger and safer together.”

Commissioner Patty Sheehan picked the color red to paint in the first letter “b.” She says Lake Eola Park has a proud history in the LGBTQ community as a venue where people have asked for justice.

She says today she’s asking for justice for the Black community.

“Symbols do matter and art does heal and it does inspire. This is a visual presence that must be followed up with work and protective policies to stop violence against people of color by our police departments. Black Lives Matter. If we can write it on the streets, perhaps we can burn it onto our collective souls to fight for justice.”

The first Black Lives Matter mural was commissioned by DC Mayor Muriel Bowser earlier this month on the road leading to the White House. Since then murals have been added in cities from Oakland, California to New York City.

Today I was honored to attend the dedication for the #BlackLivesMatter street mural in Orlando. We, here in Orange County, are a community that stands against racism & bigotry. We are a community that cares for one another. I’m excited for this new edition to our beautiful city. pic.twitter.com/ALFBgWqroG