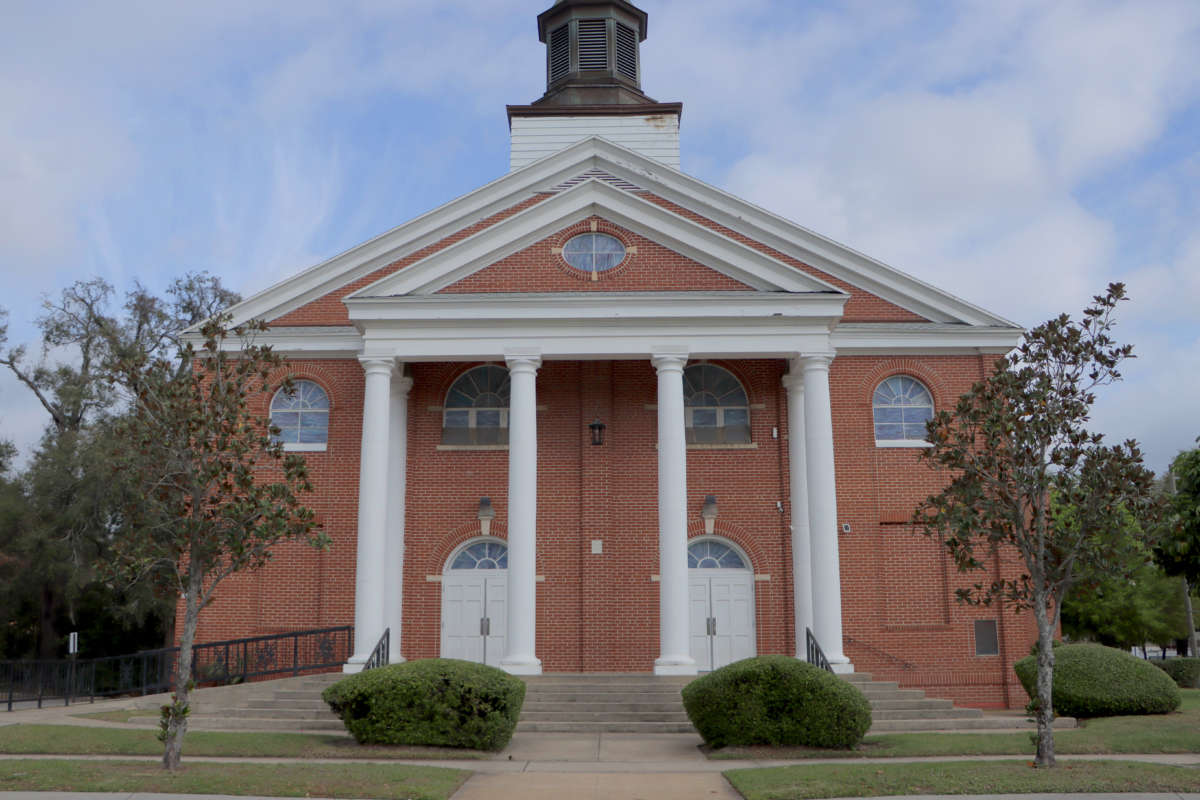 The Black church was a great place to feel empowered and to encourage others to join in activist efforts. Harry T. Moore wouldn’t have been able to register thousands of Black voters had it not been for the church. So when was the first Black church established in Orlando?

WMFE’s Talia Blake spoke to Mt. Zion Pastor, Rev. Robert Spooney about the history of Black Churches in Central Florida. Mount Zion Missionary Baptist Institutional Church was the first Black church established in Orlando, although it has changed over the years.

“The church was actually organized in 1880,” Rev. Spooney explained. “And as you know, one of the primary reasons of a church being established back in the 1880’s was because of segregation and the fact that African Americans wanted to worship at the time, there was no African American church.”

“And so this church was founded by about seven individuals. It actually started when they constructed what’s called an arbor bush. And basically, it’s like a lean-to shed that they met under that for years. And then this, I think this is the third or fourth church building.”

In 1946, Reverend Nathaniel Greene Staggers was unanimously voted to lead Mt. Zion. He would lead that congregation in the church and outside the church until 1970. During the time of the Moore murders, Staggers was an important figure in the life of the church and in the civil rights movement in Central Florida.

“Mount Zion was very important because their pastor, Reverend N.G. Staggers was the president of the local chapter of the NAACP in the 40s and 50s,” Spooney detailed. “And Reverend Staggers worked with his church members to challenge some unjust and unconstitutional laws in Florida.”

One major way Rev. Staggers pushed for equal rights was through the court case Evelyn R. Ellis et al versus the Board of Public Instruction of Orange County. All of the plaintiffs came from the Mount Zion Congregation. Rev. Spooney says Evelyn Ellis’s father- John P. Ellis- wanted his daughter to have the opportunity for a better education. Instead of being allowed to enroll at a white school with better resources, the School Board simply gave Evelyn her diplomas at twelve years old.

After four years of gathering support from the NAACP and the church, the lawsuit was filed in 1962. Schools began to desegregate, but the pace of desegregation was slow.

Another local Pastor, Father Nelson Pinder, also played an important part in desegregation efforts. He moved to the area in 1959 and was the first black Pastor of St. John the Baptist. He helped organize sit-in’s and demonstrations.

Pastor Robert Spooney was too young to participate in Father Pinder’s demonstrations, but remembers the Father as a “go-getter.”

Father Pinder spoke to WMFE back in 2016 about the Civil Rights Movement.

“That was necessary,” he said of the sit-ins and demonstrations.

“It was a chance to show the political system that our vote counted. It was more than just sit-ins, it was registrations to vote. It was a matter of the school board, straightening up the salaries, the city doing right by their workers.”

Former student activist Louise Dinkens participated in the sit-ins around Orlando with other student activists. She was also a part of the Youth Council of the local chapter of the NAACP. She was arrested at the age of 16 and lied about her age in order to stay with her group of activists.

Dinkins remembers being frightened by an officer threatening their lives on the day of the arrest. Despite the heckling, threats, and violence, Dinkins continued to demonstrate. She explains “it was still an exciting time and you felt like, really felt like you were doing something, you know, not just sitting back… that you [were] part of something that would help the people, you know, not just black people just but to help people.”

One way to deal with the anxiety and fear of what could happen at a protest was to pray beforehand. Dinkins remembers the church as a place that supported their activism. “When we would have a demonstration, they would say, you know, ok, we’re praying for you. And we would rally after that. Mostly, after we’d had a sit in or an incident or something, we would have a rally at one of the churches, or a community meeting or whatever.”

Continue to Part 3 of this series >>