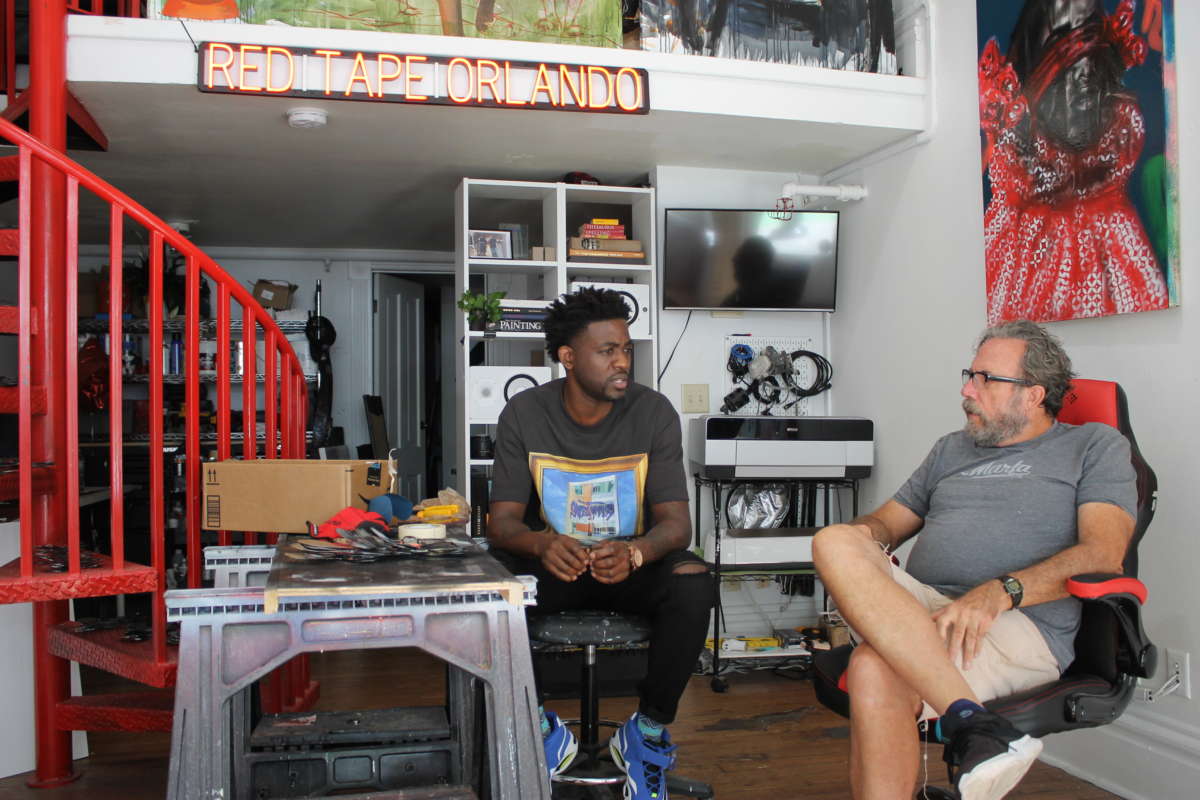 How do you get more people to pay attention to Orlando artists? This is a question curator Patrick Greene has been pondering, and one solution he’s come up with to get art in front of more people is to put it on billboards.

Greene is taking inspiration from a similar project in LA. He’s teaming up with the Downtown Arts District and Clear Channel for a billboard show in Central Florida that will debut in January. Greene has selected some of the artists- and he’s calling for submissions too. Greene met up with Intersection’s Matthew Peddie to discuss the project at the studio of painter Peterson Guerrier, one of the artists whose work will be part of the show.

“Most of the people, or I guess we could say characters, that are portrayed in my work are people that I actually know, that I photographed. So there’s a sense of connection between the work and my community as well,” says Guerrier. Photo: Matthew Peddie, WMFE

“Orlando’s not really known maybe to the rest of the world for art, you know,” says Greene.

“People driving through I-4 need to see this too, but also the local people need to kind of see what’s going on around here,” he says.

Guerrier, who grew up in Miami and studied art in Detroit, says he wanted to be an artist from a young age. He works in charcoal, resin, paint and other mixed media.

“The beautiful thing about my work as well is that most of the people, or I guess we could say characters, that are portrayed in my work are people that I actually know, that I photographed. So there’s a sense of connection between the work and my community as well,” says Guerrier.

Greene hopes featuring the art on 30 12 by 25 ft. billboards and 5 digital billboards will help build the audience for Central Florida artists.

Guerrier agrees the project is an opportunity to showcase the area’s art scene. “People can actually see the talent that we have here. Because one of the things that I really dislike when people say, if they come to any shows was like, “This feels like Miami, this was like New York or LA”. No, this is Orlando, this is what this is what we’re doing here. We’re not trying to be like anybody else.”

Greene says the criteria for entry are “deliberately loose.”

“If you think your work looks good on a billboard, submit it,” he says. The deadline for submissions is October 1st.