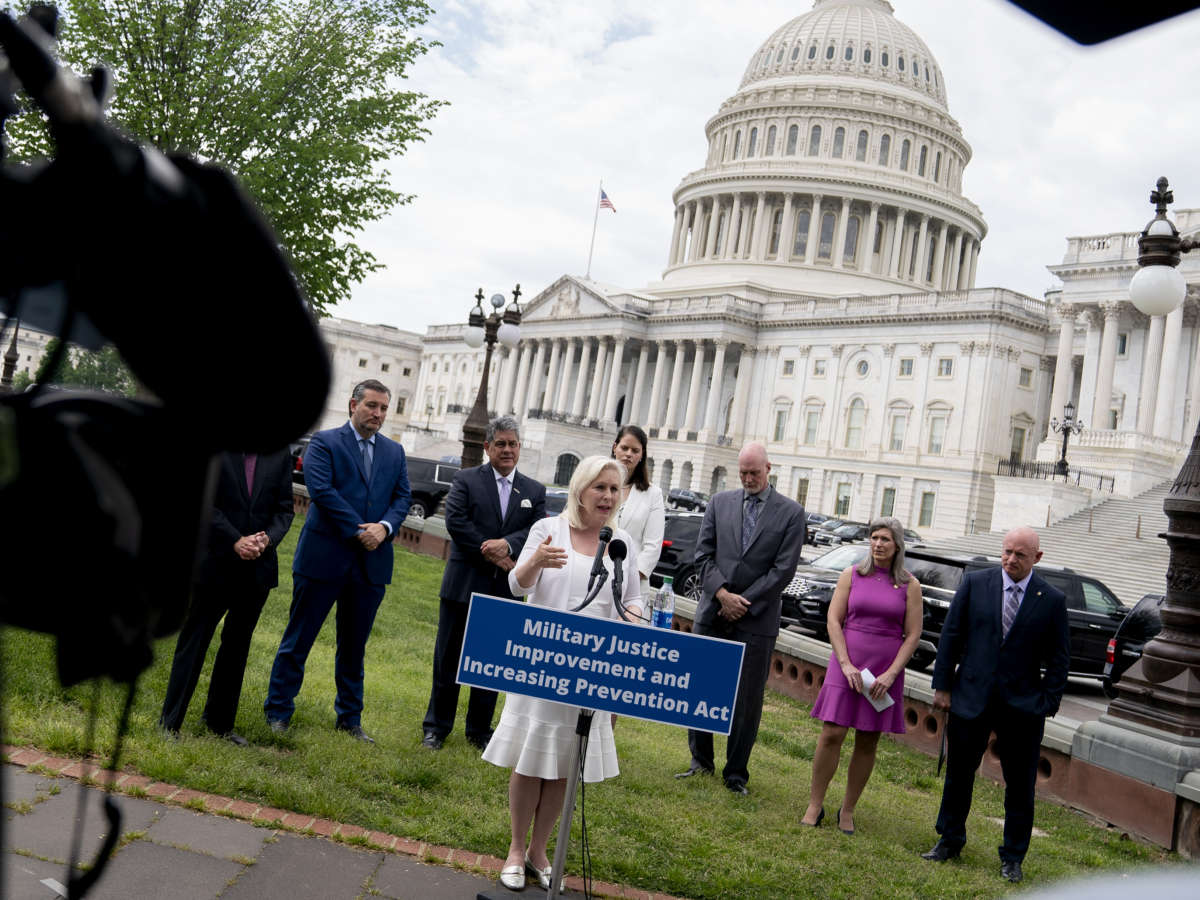 Sen. Kirsten Gillibrand (D-NY) (C) speaks during a news conference outside the U.S. Capitol on April 29, 2021 in Washington, DC. A bipartisan group of Senators gathered in support of the Military Justice Improvement and Increasing Prevention Act, which would move the decision to prosecute a member of the military from the chain of command to independent, trained, professional military prosecutors.
Image credit: Stefani Reynolds

In a breakthrough for an eight-year-long effort, two senators behind legislation to revamp the way the military handles sexual assault cases and other serious crimes say the bill has the bipartisan votes to gain passage.

New York Democratic Sen. Kirsten Gillibrand and Iowa GOP Sen. Joni Ernst said on Wednesday that the legislation would, for the first time, move cases out of the chain of command to trained, military prosecutors. Such cases would remain under military oversight, but instead be handled by criminal justice attorneys with relevant expertise, as opposed to commanders who often lack legal training.

Gillibrand, after joining forces with Ernst, has found new success this year in moving the measure forward. Gillibrand has made the effort to curb sexual assault in the services a marquee issue, seeking approval for the plan since 2013. If passed, the bill would dramatically change the landscape for how such crimes are prosecuted.

“We have enormous momentum. I think we are well over 60 votes at this point,” Gillibrand said of the legislation’s support in the Senate.

“We are bound and determined,” she said. “We’ve basically met that threshold and I am just so excited that hopefully we will [be] making changes that make a significant difference in our military men’s and women’s lives.”

Gillibrand said that in addition to Ernst’s endorsement, the legislation has gained momentum through the support of past holdouts from both sides of the aisle, and breakthroughs among current and former top military officials.

As a candidate, President Biden also talked about supporting the plan while on the campaign trail last year. Shortly after taking office, Biden asked Defense Secretary Lloyd Austin to conduct a full review and issue recommendations.

Last month, a panel created by Austin agreed with Gillibrand’s stance, running counter to the Pentagon’s long-standing position on the matter, saying that decision-making on such cases should be taken out of the chain of command. The panel’s decision marked the first time time lawmakers had Defense Department recommendations aligning with the bill on hand, Gillibrand said.

“We have a commander-in-chief who deeply wants to eradicate sexual violence in the military and is willing to change the system,” said Gillibrand, who chairs a Senate subcommittee on personnel matters in the military.

The shifts among current and former top military leaders has coincided with newfound support from key GOP members, including Ernst.

“Prominently, Joni Ernst, who is the only … female combat veteran in the Republican Senate” has played a significant role, Gillibrand said. “So the fact that she is with us has really changed the dynamic.”

Ernst said she was previously torn on the issue. But after years with no improvement in the number of assault cases, Ernst said it was time for a new approach.

So Ernst worked with Gillibrand to revise the legislation to include a series of preventative measures to combat sexual assault. Those measures include requiring the defense secretary to survey and improve physical security for military installations, such as locks and cameras, and increase training for commanders and other servicemembers on military sexual assault.

On another personal level, Ernst has a daughter who is currently attending the U.S. Military Academy at West Point, N.Y. She said a father of another West Point student lauded the plan to her.

“I think that is the sentiment that is out there,” Ernst said. “We have a lot of really bright young men and women who decide to step into uniform and serve our nation, and we should do everything we can to ensure we as Congress, as American citizens, are protecting those who are protecting us.”

Gillibrand said it’s important to note that the legislation will not bring civilian oversight into such cases, but rather, replace commanders who often don’t have a great deal of legal training with prosecutors who do.

“We’re trying to professionalize how these cases are handled,” Gillibrand said. “We are creating a state-of-the-art DA’s office within the military to handle all serious crimes.”

The Military Justice Improvement and Increasing Prevention Act would also move other crimes — such as murder, manslaughter, child endangerment, child pornography and negligent homicide — under this new system. Meanwhile, misdemeanors and military crimes would stay under the chain of command. A similar plan has been championed in the House by Rep. Jackie Speier, D-Calif.

One group pushing for the overhaul, human rights group Protect Our Defenders, told CQ Roll Call this past week that they had received signals that the legislation finally has the necessary votes to move forward in the Senate.

By Wednesday, the legislation had reached 54 co-sponsors — including at least 10 Republicans — and is poised to gain more co-sponsors in the coming days and weeks. Among those who haven’t signed on but have previously expressed support or voted for the measure is Senate Minority Leader Mitch McConnell, R-Ky.

Aside from Ernst, GOP Sens. Chuck Grassley of Iowa, Susan Collins of Maine, Shelley Moore Capito of West Virginia, Mike Braun of Indiana, Rand Paul of Kentucky, Cynthia Lummis of Wyoming, Tommy Tuberville of Alabama, Bill Cassidy of Louisiana and Ted Cruz of Texas have signed on as co-sponsors.

Gillibrand has also been buoyed by Democrats who previously opposed the measure, and have come out in support, including Sens. Tim Kaine and Mark Warner of Virginia — a state with a large military population.

The new tide of support comes on the heels of years of reports showing that despite incremental changes to military law, the services remain plagued with sexual misconduct cases and elusive improvements.

Witnesses have repeatedly testified before Congress about trying to undo long-standing culture issues and the Uniform Code of Military Justice that sets the current protocols.

Advocate groups have repeatedly said that there has been no improvement despite decades of promises from leadership and commanders, saying the commander-controlled system has failed to deliver accountability.

The military has reported climbing figures in reports of sexual assaults. In 2019, the Pentagon reported that about 20,500 service members had experienced some form of such an assault. That was 37% higher than two years earlier.

This, as the rate of prosecution and conviction for related cases has been cut in half to about 7% since Gillibrand first introduced her legislation, she says. Gillibrand also said that the current structure, while allowing such crimes to be pervasive, also hurts military readiness.

The issue drew renewed attention in 2019, when former Arizona GOP Sen. Martha McSally said during a related hearing she was raped by a superior officer. However, the retired Air Force colonel, who lost her Senate seat to Democrat Mark Kelly this past year, was opposed to Gillibrand’s proposal. Kelly has since signed on as a co-sponsor of the bill.

“A lot of people have begun to change their minds,” Gillibrand said.