Biking to work in the most dangerous state to do it 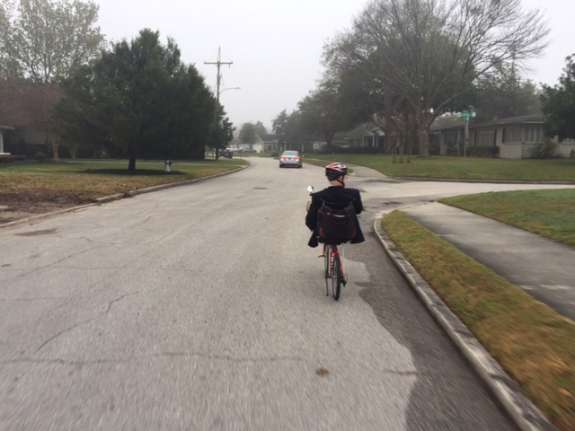 Frank Gilbert rides a bike most days from College Park to downtown Orlando.

Frank Gilbert has been nudged a few times while riding a bike to work. Nudged is his term for cars bumping into him.

If you close your eyes and think of someone riding a bike to work, you might picture spandex and neon helmets. Maybe jean shorts and a handlebar mustache.

That is not what Gilbert looks like. Gilbert is middle aged, wearing khaki pants, a blue blazer and tie while cruising in his recumbent bike from College Park to Downtown Orlando. It’s a trip he makes four times a week.

“A part of my approach is to assume I’m invisible,” Gilbert says while riding to work one recent morning.

Gilbert is one of the estimated 1,300 people in Orlando who use a bicycle as their main way to get to work. It’s such a small sliver of the commute, Gilbert has to constantly worry about people not seeing him in the road.

I see his invisibility watching a line of cars make a right turn to get to a parking garage without yielding, one after the other.

“If I went out there, I would have to depend on them seeing and recognizing me,” Gilbert said.

The city is latching on to a growing trend across the county of choosing a bike over a car to get around.  But Florida spent decades building roads designed to move commuters from homes in sprawling suburbs as fast as possible.

Conventional wisdom says these roads were built for speed, and federal data show Florida has the highest death rates per capita for both cyclists and pedestrians.

“I’ve always said that DOT is kind of like a dreadnought,” Carter said. “Originally it was aimed specifically at managing vehicular travel.”

But now they have to accommodate this growing number of cyclists. Now this may seem counter-intuitive, but what Florida needs is more cyclists and more pedestrians.

The idea is that, with critical mass, more drivers will see them, says Stefanie Feskin, deputy director of the National Complete Streets Coalition at Smart Growth America. And events like bike to work day can help.

“Building those numbers, it really does make safety even better,” Feskin said. “So you can be physically active without fearing serious injury or death with the more people out there.”

And some cities in Florida are taking matters into their own hands. Casselberry, Matiland and Winter Park brought in Bill Nesper to show them how to make their cities more bike friendly.

Nesper is with the League of American Bicyclists and Orlando hopes he’ll improve their rating. SunRail is a piece of the puzzle.

During a recent morning commute, Nesper rolled his bike onto a pretty crowded train car.

“You’re seeing good things happen,” Nesper said. “So right now, this is an example. I’m on Sunrail right now. I rolled my bike on here and I’m able to go to downtown Orlando now.”

Meanwhile, College Park resident Frank Gilbert wraps up his 20-minute bike ride to work. To him, the risk of being hit is worth the saving of not owning a second car.

We pull into the garage at his work. The bike rack is right up front.

“I think you experienced it wasn’t a honk honk, beep beep kinda trip,” Gilbert says to me.

How often does that happen?

Want to know what it’s like to ride a bike to work in Orlando? Health reporter Abe Aboraya narrates his ride: