Big Government Is Back, And 3 Other Takeaways From Biden’s Address To Congress 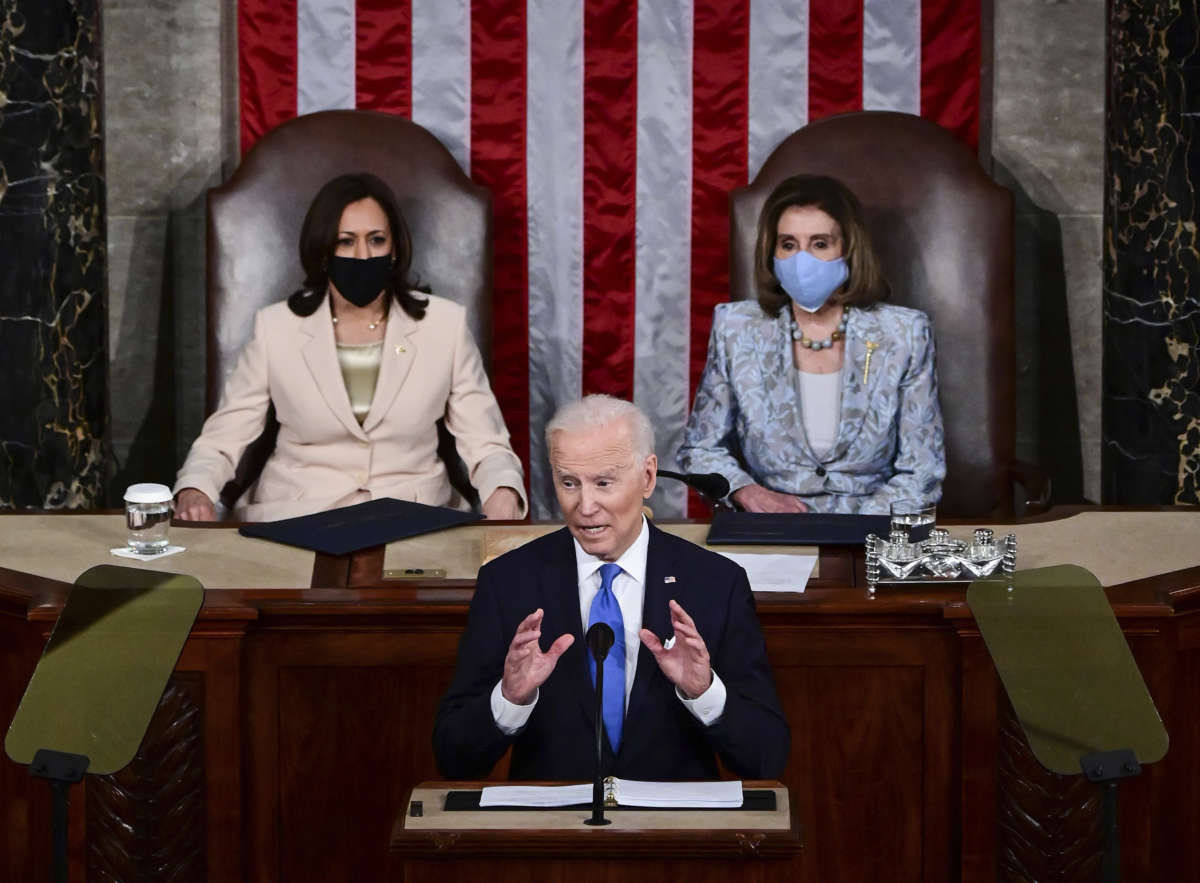 President Biden’s joint address to Congress looked back over the challenges he faced taking office 100 days ago in the midst of a pandemic — and declared “America is on the move again.” But the speech also outlined an ambitious, active role for the government to continue helping Americans struggling, as well as new proposals to boost the country’s ability to compete. It amounted to an updated New Deal, but one that faces a precarious path to get through razor-thin margins in both the House and Senate.

Because of the pandemic and the personality of President Biden, the hour-plus speech was a stark contrast from his predecessor’s. It was a more low-key and traditional litany of policy priorities instead of the often unpredictable and unscripted moments seen in former President Donald Trump’s speeches on Capitol Hill.

Instead of facing a crowded chamber of lawmakers ready to interrupt with loud cheers, Biden spoke to a mostly empty chamber — only 200 attendees instead of the usual 1,600. The former senator felt at home, ad-libbing references to his former colleagues in Congress, and seeming nostalgic about his time walking the halls in the Capitol. But he also spoke to a deeply divided room that almost had polar opposite reactions to the bulk of his presentation.

Here are some takeaways from the joint address:

1. Era of big government is back, and Biden is all in

Former President Bill Clinton notably declared in his 1996 State of the Union address that “the era of big government is over,” marking a shift for Democrats then trying to show attention to fiscal responsibility. But Biden, in unabashedly rolling out new, liberal federal programs, rejected that and instead argued government was the solution.

Biden already notched one legislative achievement on his belt with the $1.9 trillion coronavirus relief bill that he signed in March. Less than three weeks later, he unveiled a $2.3 trillion infrastructure bill, dubbed the American Jobs Plan, which calls for spending on a range of items like roads, bridges, water systems and broadband access. But it also expands beyond traditional infrastructure spending to include plans to address racial inequity and combat climate change.

Lawmakers on Capitol Hill have spent weeks debating what should ultimately qualify as infrastructure, and Republicans introduced their own, much more-targeted $568 billion proposal.

And Biden spent much of the primetime speech Wednesday outlining another massive domestic program — his American Families Plan — a $2 trillion plan that includes initiatives pushed by progressives like Sen. Bernie Sanders. These would dramatically widen the social safety net for Americans from preschool age to those on Medicare. It would convert some items initially designed as temporary coronavirus relief to more permanent federal mainstays for millions of families.

Biden was viewed as the moderate in the 2020 Democratic field. But since swearing in, he’s made clear that he views his role is to use the government to transform the economy, targeting those at the lower rungs of the economic ladder. The Families Plan provides money for two years of preschool and two years of free community college, extending the current 12 years of public school American students now get. Biden also said low-income Americans should be guaranteed to spend no more than 7% of their income for child care for kids up to the age of 5. He insisted the U.S. should support up to 12 weeks of paid family and medical leave.

In total, Biden outlined almost $6 trillion in spending — another $4 trillion on top of what Congress already approved. This is a staggering sum, especially with the U.S. facing record deficits. It’s also an ambitious effort politically after Democrats muscled through a COVID-19 relief bill through both chambers essentially on party-line votes due to universal GOP opposition.

Biden faces long odds to get the entire scope of his proposal through — he urged both parties to come together, but there’s little evidence he’ll get much, if any GOP support. He still needs to sell members of his own party on the merits of his plans. West Virginia Democratic Sen. Joe Manchin, a critical vote in the 50-50 Senate, told reporters on Capitol Hill before the speech that the size of the series of programs made him “uncomfortable.”

Republicans have tagged Biden’s expansive vision for more federal spending as “radical” and mocked his argument that items like health care subsidies and child care tax credits are forms of infrastructure. But instead of engaging in that debate, Biden argued that the U.S. should be compelled to provide these types of programs now because it was falling behind globally. He said these programs would equip Americans to compete with other countries in the 21st century — with education the cornerstone to close the gap.

Biden said he wanted ideas from Republicans, and there was room for compromise, but he made it clear he wouldn’t wait if negotiations didn’t progress, saying: “Doing nothing is not an option.”

“We can’t be so busy competing with each other that we forget the competition is with the rest of the world to win the 21st century. To win that competition for the future, we also need to make a once-in-a-generation investment in our families, in our children,” Biden said.

The president, who regularly touts his own blue-collar roots, maintained that his plan was targeted to those who had been left behind as other nations emerged as leaders in the development of new technologies.

“The American Jobs Plan is a blue-collar blueprint to build America,” he said. He argued his proposal to tax wealthy Americans and corporations was a fair approach, since the small number of ultra rich only expanded their portfolios during the pandemic while middle-class and low-income workers suffered.

3. Biden tied the success of his presidency to reasserting democracy abroad

President Biden didn’t mention former President Donald Trump by name, but as he talked about his conversations with foreign leaders and his pledge that America was reengaging in alliances around the world, he stressed that he was pivoting away from the past four years.

Standing in the Capitol that was attacked on Jan. 6 by pro-Trump extremists who disputed the 2020 election results, Biden said, “the insurrection was an existential crisis — a test of whether our democracy could survive.”

He framed the government’s success at quickly distributing vaccines as a model for the rest of the world — that the American way is superior and more effective than those led by “the autocrats of the world.”

“It’s time we remembered that we the people are the government. You and I. Not some force in a distant capital. Not some powerful force we have no control over,” Biden said. Americans have a responsibility to “do our part” — a contrast from Trump’s emphasis on an “America First” foreign policy.

Biden said: “If we do, then we will meet the central challenge of the age by proving that democracy is durable and strong. The autocrats will not win the future.”

Presidents frequently argue that they are making historic strides in their annual prime-time speeches, touting a policy accomplishment or statistics about a record-breaking economic indicator.

But Biden made the point of pausing at the start of his speech to emphasize the image of him standing for the first time as president of the United States before two women on the rostrum. That moment — streaming online and on television screens to millions — was a compelling moment for women, and for communities of color.

“Madam speaker, madam vice president — no president has ever said those words from this podium, and it’s about time,” Biden said, acknowledging the first female vice president, Kamala Harris, sitting behind him, alongside Speaker of the House Nancy Pelosi.

Later the president mentioned tasking the vice president with leading the effort to implement his American jobs plan, and her role in the diplomatic effort to address the immigration crisis in talks with Central American countries.