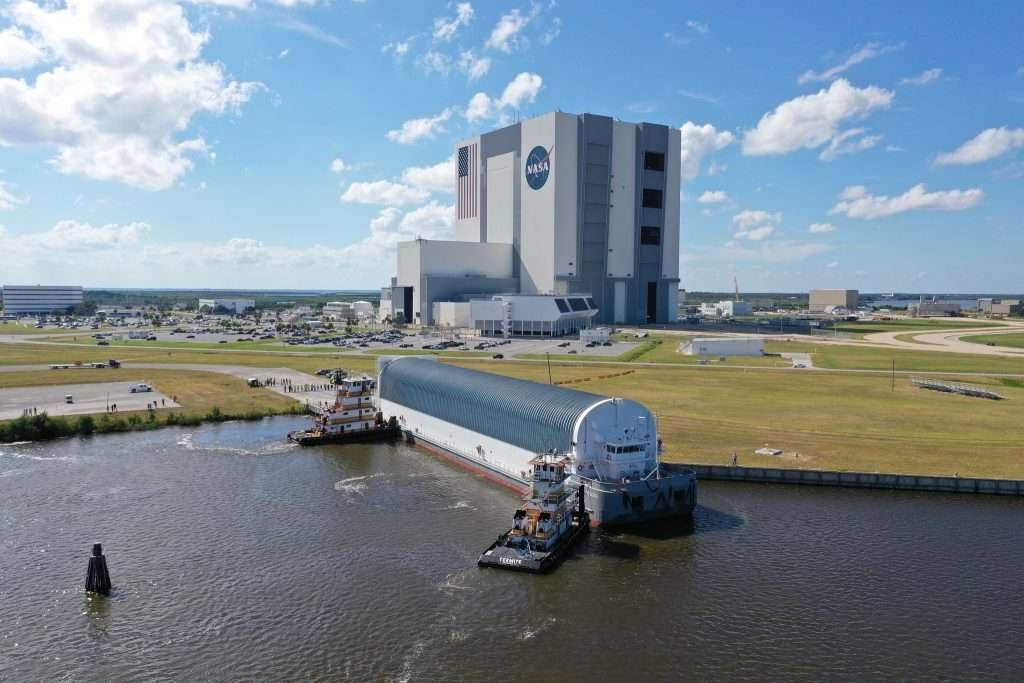 NASA’s Pegasus Barge arrives at the Launch Complex 39 turn basin wharf at Kennedy Space Center in Florida on Sept. 27 to make its first delivery to Kennedy in support of the agency’s Artemis missions. Photo: NASA/Mike Downs

Federal workers and contractors will soon be required to be vaccinated for COVID-19 under a new plan announced this week by President Joe Biden, which includes more than 62,000 NASA employees and contractors.

NASA administrator Bill Nelson said his agency will implement the rule “as soon as possible.”

In a statement sent to the NASA workforce obtained by WMFE, Nelson said more than 20 members of the agency have so far died due to COVID-19. “That’s more than 20 colleagues who gave their best to NASA,” he said.

Despite the pandemic, NASA and private company SpaceX successfully return human spaceflight to U.S. soil with the launch of DM-2 in May 2020, a test flight of SpaceX’s Crew Dragon capsule carrying astronauts Doug Hurley and Bob Behnken. NASA and SpaceX rolled out safety protocols for crew working on the mission and discouraged large crowds from gathering to view the historic launch.

“I think NASA has been at the forefront of laying out the requirements that we feel like we need to have in place to be able to have our people work safely together,” said Kathy Lueders, NASA’s head of Human spaceflight.

“Having the ability to and the key tools that we have in place to be able to keep our folks safe, while we’re accomplishing the missions that we are in has just been critical,” she said. “Obviously, we support [the mandate].”

Across the country, NASA employs more than 17,000 civil servants and 45,000 contractors — all of which will be required to have their COVID-19 vaccination. Around 10,700 federal employees and contractors make up the workforce at Kennedy Space Center here in Florida.

“This will be a requirement,” Nelson said in the statement to NASA’s workforce. “It’s the right thing to do, and it’s critical to keeping the NASA mission moving forward.”