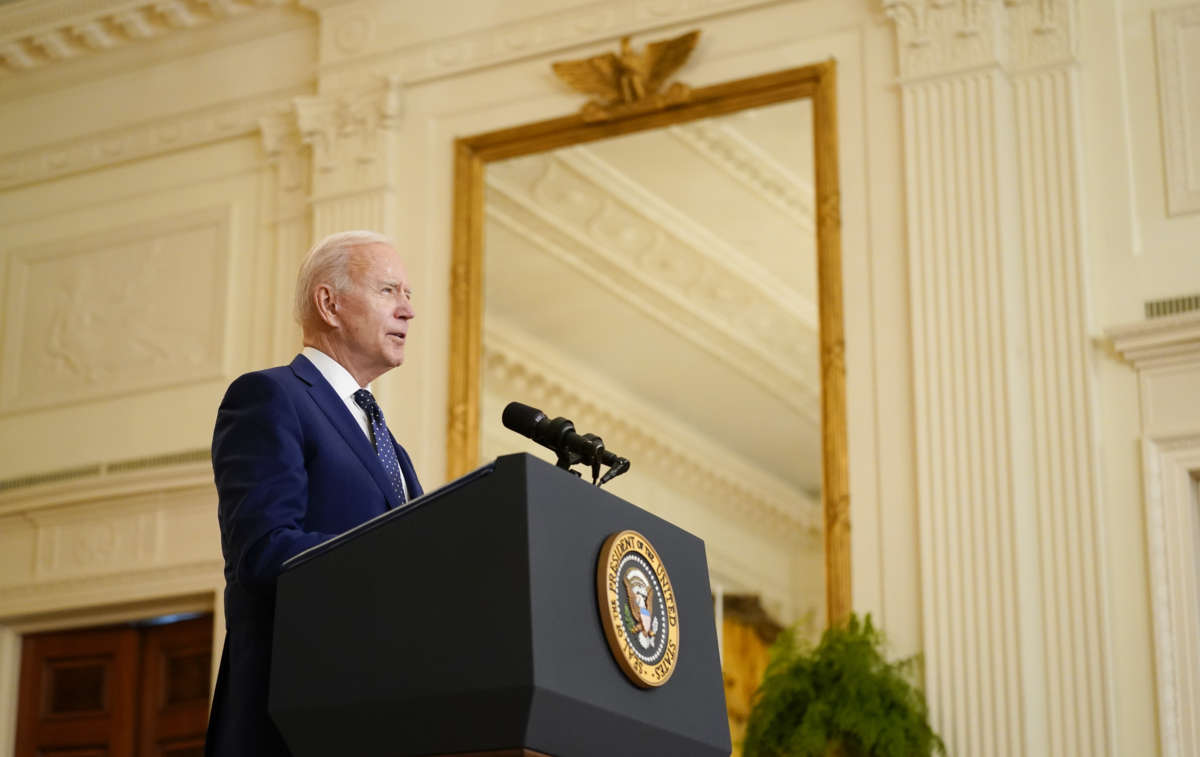 Nearly 100 days into office, President Biden is lagging his predecessors in the number of bills he has signed, but he is far outpacing them on executive orders. Here, Biden speaks about Russia in the East Room of the White House on April 15.
Image credit: Andrew Harnik

As far as artificial milestones go, few dates seem to carry as much weight as a new president’s 100th day in office. It’s a date that former Obama adviser David Axelrod once referred to as a “Hallmark holiday.” In other words, it gets lots of attention but has no actual significance.

For better or worse, marking the first 100 days has become a time-honored tradition in Washington. For that, President Biden has Franklin D. Roosevelt to thank. Over the course of his first 100 days in office, FDR not only helped shore up a rapidly deteriorating banking system — helping to bring an end to the Great Depression — but also laid much of the groundwork for what would become the New Deal.

Presidents have been measured by the 100-day standard ever since. As Biden inches closer to crossing the milestone on Thursday, here is a look at where he stands on nine key benchmarks.

When it comes to a yardstick for measuring a president’s first 100 days, political scientists will say to focus on the significance of the bills the president signs, not the number. In part, that’s because the first 100 days have become far less productive on the legislative front for modern presidents since the high-water mark of 76 laws set by FDR. Biden’s early record is a case in point for this theory. The 11 bills he has signed into law are among the fewest for any newly elected president dating back to FDR. At the same time, if there is one piece of legislation that Biden’s first 100 days will be remembered for, it will be the $1.9 trillion coronavirus relief package that he signed in March.

While Biden may be lagging his predecessors on the number of bills he has signed, he’s far outpacing them on executive orders. Biden has signed 41 to date, more than any president going back to Harry Truman. He may have campaigned on bringing bipartisanship back to Washington, but much of his early focus at least has been on policies he can implement on his own, such as measures to revoke the permit for the Keystone XL pipeline, requiring masks on federal property and continuing a ban on evictions amid the coronavirus pandemic.

Executive action has also been a way for Biden to make good on promises to undo some of his predecessor’s most controversial policies. He has recommitted the U.S. to the Paris climate agreement, halted the U.S. exit from the World Health Organization and paused construction of the border wall. It’s not exactly shocking that a new Democratic president is undoing the policies of his Republican predecessor — it’s what Biden campaigned on after all. What’s notable is the pace at which Biden is working. Through April 23, he had undone 62 out of 219 orders signed by former President Donald Trump, according to the American Presidency Project.

Trump, by comparison, reversed 12 of former President Barack Obama’s orders in his first 100 days but managed to roll back over a dozen more regulations in the early months of his presidency through use of the Congressional Review Act. Because of the way the law is written, Democrats have only a narrow window of time within which to use it. But even without the CRA, Biden’s use of executive action has already allowed him to undo more than twice as many orders in his first 100 days as the last three presidents combined.

Biden’s job approval rating in the latest NPR/PBS NewsHour/Marist survey clocked in at 53% — his highest since taking office. He is already more popular than Trump was on any day of his presidency, according to FiveThirtyEight’s polling average, but his job approval is generally below where most recent presidents have been at this point in their first term. That appears in large part to be a result of increased polarization — 93% of Democrats approve of the job Biden is doing versus only 12% of Republicans. Given that divide, the question is, how much can his numbers move in either direction? While Trump may have left office with the lowest approval rating of any modern-day president, his numbers held more or less steady over his four years in office. Unless partisan tensions ease dramatically, Biden could be on course for a similar trajectory.

U.S. employers have added more than 1.2 million jobs since Inauguration Day, and while that is certainly welcome news inside the White House, nearly 10 million Americans are still out of work and the jobless rate is stuck about 2.5 points higher than it was before the pandemic. To be sure, most economic conditions are beyond a president’s control, so it can be tough to assign too much credit or blame to whoever’s in office, especially 100 days in. But the strength of the recovery will nonetheless continue to frame the debate around the president’s $2 trillion infrastructure plan — a plan he says is all about jobs.

Biden has made confronting the coronavirus his administration’s top priority, but no president in modern history has taken office amid a global health crisis on the scale of what he inherited on Jan 20. Under Biden, new daily cases have dropped from an average of more than 199,000 in the week leading up to his inauguration to about 54,400 cases today — a 73% drop. While that progress has won Biden high marks for his handling of the pandemic, cases have been slowly creeping back up as newer, more virulent strains of the virus have grown more dominant.

At the center of the administration’s plan to end the public health crisis is the push to get as many shots into arms as quickly as possible. And if there has been one theme on that front, it has been to underpromise and overdeliver. Biden took office promising 100 million vaccine shots by his 100th day, but after reaching that target on Day 58, he upped the goal to 200 million. He hit that figure last week. Biden similarly set May 1 as the deadline for when all adults would be eligible to receive a vaccine but then moved that target up to April 19. As of Monday, more than 230 million vaccines have been administered. More than 139 million people, or about 54% of the adult population, have received at least one dose, while more than 95 million, or about 37% of the adult population, are now fully vaccinated.

Biden has made 11 nominations to the federal bench, but he has a long way to go if he hopes to match the more than 220 judges who won confirmation as part of a historic overhaul of the judiciary under Trump. Biden’s staff says filling judicial vacancies is a top priority, but his window may be a narrow one. If Republicans win back the Senate in next year’s midterm elections, Biden will in all likelihood face the same roadblocks that kept Obama from filling more seats. There are currently 77 vacancies for Biden to fill, plus another 27 judges who’ve announced they will step down or take “senior status” in the next few months.

As a candidate, Biden said the U.S. needed a president who would lower the temperature in Washington. On Twitter at least, he appears to be doing just that. Since taking office, Biden’s @POTUS account is averaging about six tweets per day. Compare that with Trump, who by one count spent more than nine full days of his presidency on Twitter. Until Trump’s account was permanently suspended in January, in fact, Trump tweeted more than 26,000 times as president, or roughly 18 times per day.