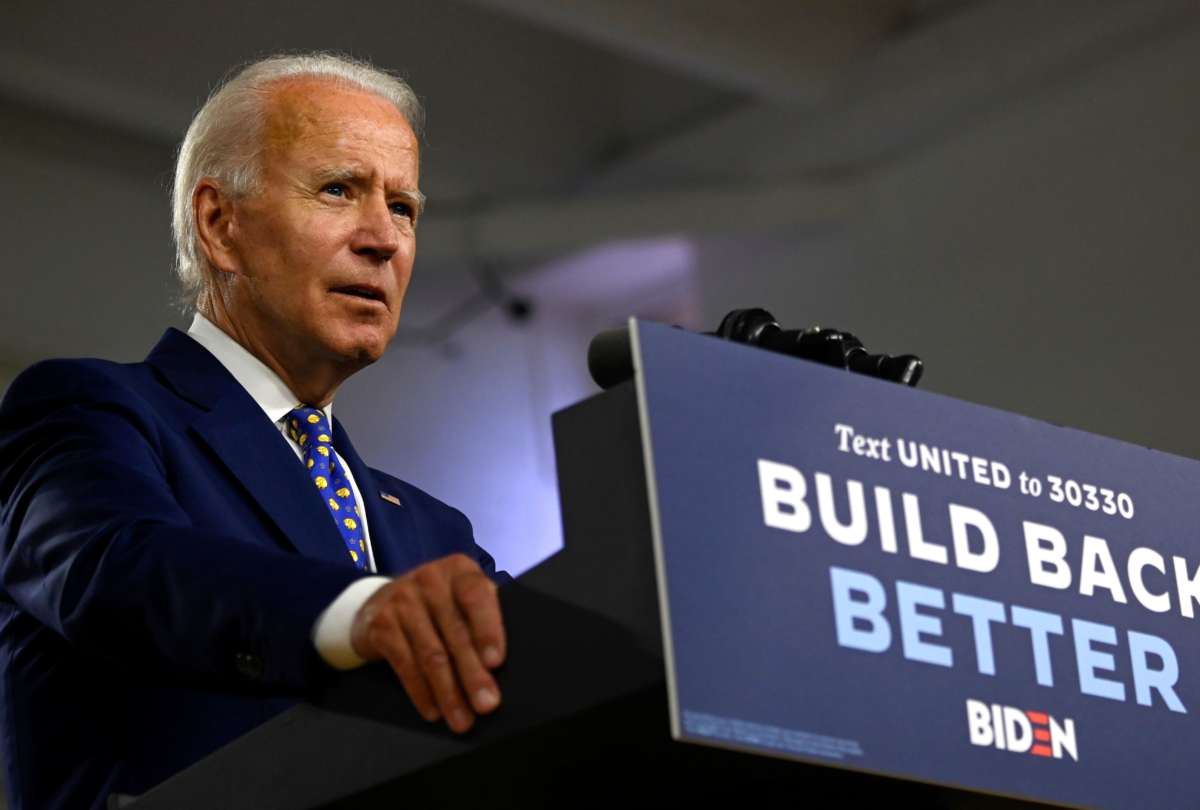 Presumptive Democratic nominee Joe Biden says if elected, he would not tear down the parts of the barrier along the U.S. southern border built during the Trump administration — but he would cease construction.

In our #nabjnahj2020 interview, @JoeBiden promised that 'not another foot of wall would be constructed" on the border. Watch our exchange: pic.twitter.com/rM9OgsYicU

“I’m going to make sure that we have border protection, but it’s going to be based on making sure that we use high tech capacity to deal with it. And at the ports of entry — that’s where all the bad stuff is happening,” the former vice president said.

Biden went on to commit to fully ending land confiscations, a more aggressive stance than President Barack Obama took when he came into office after President George W. Bush had approved border fencing to be built in the southwest.

“End. Stop. Done. Over. Not going to do it. Withdraw the lawsuits. We’re out. We’re not going to confiscate the land,” Biden told Garcia-Navarro.

Obama oversaw the construction of a fence along the southern border following Bush’s signing of the Secure Fence Act in 2006. As The Statesman reported, Homeland Security built 654 miles of fence at a cost of $2.4 billion. Significant amounts of private land was seized by the federal government for the purpose of clearing space for the barrier.

On China, Biden said he would not reverse President Trump’s tariffs and pushed back at the suggestion that some believe the Trump administration’s aggressive stance toward China has been effective.

“Manufacturing’s gone in recession. Agriculture lost billions of dollars that taxpayers had to pay. We’re going after China in the wrong way,” he said.

“China is stealing intellectual property. China’s conditioning, being able to do business in China, based on whether or not you have 51% Chinese ownership, that’s got to end.”

When pressed on whether China would have to meet any conditions for reversing tariffs, Biden deflected and said he would take a multilateral approach to get China to change its behavior.

“The question is, what is the appropriate behavior that they have to engage in international trade with us? They have to play by the international rules, and what we have done is, we have disarmed ourselves,” he said.

“We make up 25% of the world’s economy, but we poked our finger in the eye of all of our allies out there. The way China will respond is when we gather the rest of the world that in fact engages in open trade and making sure that we’re in a position that we deal with WHO the right way…That’s when China’s behavior is going to change.”

On taking a cognitive test

Biden bristled when asked by CBS’s Errol Barnett, a Black journalist, whether he had taken a cognitive test. “No, I haven’t taken a test. Why the hell would I take a test?,” Biden said. “Come on, man. That’s like saying you, before you got on this program, did you take a test where you’re taking cocaine or not? What do you think? Huh? Are you a junkie?”

President Trump has bragged about his own such test in recent weeks, which is meant to identify cognitive decline, not measure a person’s intelligence. He has tried to make Biden’s mental state an issue for voters.

Biden didn’t comment on that tactic beyond saying he looks forward to debating Trump. “Well, if he can’t figure out the difference between an elephant and a lion, I don’t know what the hell he’s talking about… I know you’re trying to goad me, but I mean, I’m so forward-looking to have an opportunity to sit with the President or stand with the President and the debates.”