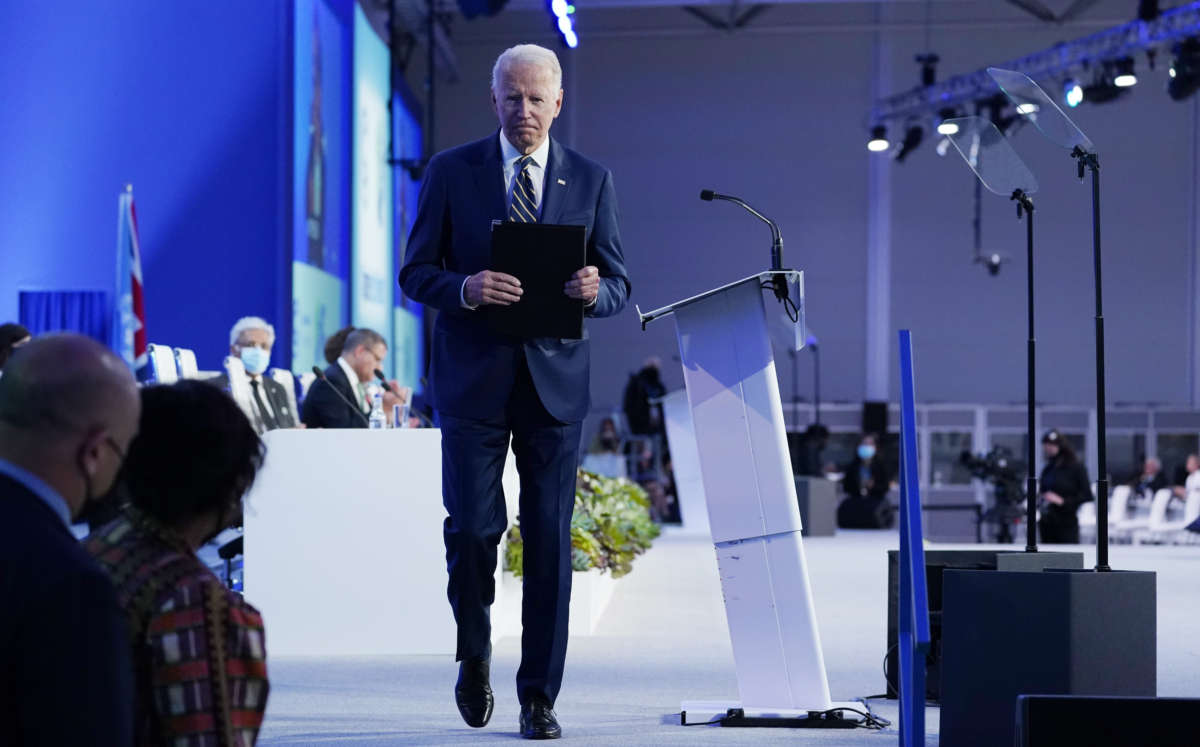 President Biden concludes his remarks at the COP26 U.N. Climate Summit on Monday in Glasgow, Scotland. Biden is holding a news conference from the summit on Tuesday.
Image credit: Evan Vucci

President Biden has promised delegates at the U.N. climate summit in Glasgow, Scotland, that the U.S. is prepared to spend billions on measures to address climate change, but that legislation remains mired in intra-party squabbling by Democrats back in Washington.

Biden is expected to be pressed on these issues during a news conference Tuesday at the end of a trip that included two days at the summit and time in Rome for the G-20 meeting.

Biden addressed delegates at the COP26 gathering on Monday, asserting the U.S. was “back at the table,” and his administration was on the verge of making “the most significant investment to deal with the climate crisis that any advanced nation has made, ever.”

Biden is hoping congressional Democrats will approve his traditional and social infrastructure measures, which together would spend more than $900 billion on climate change, through a variety of grants, tax credits and other programs.

The physical infrastructure bill has already been approved by the Senate and is awaiting action by the House, where Democratic leaders hope to approve both measures in tandem.

But it’s far from clear what the timetable will be, given the continuing refusal of Democratic Sens. Joe Manchin of West Virginia and Kyrsten Sinema of Arizona to commit to the social spending package. Their support is crucial for the measures’ passage in the evenly divided Senate.

Manchin said Monday that he will not support the proposed framework for the bill “without thoroughly understanding the impact it will have” on the nation’s debt. The White House responded that it was still confident Manchin would ultimately support the legislation.