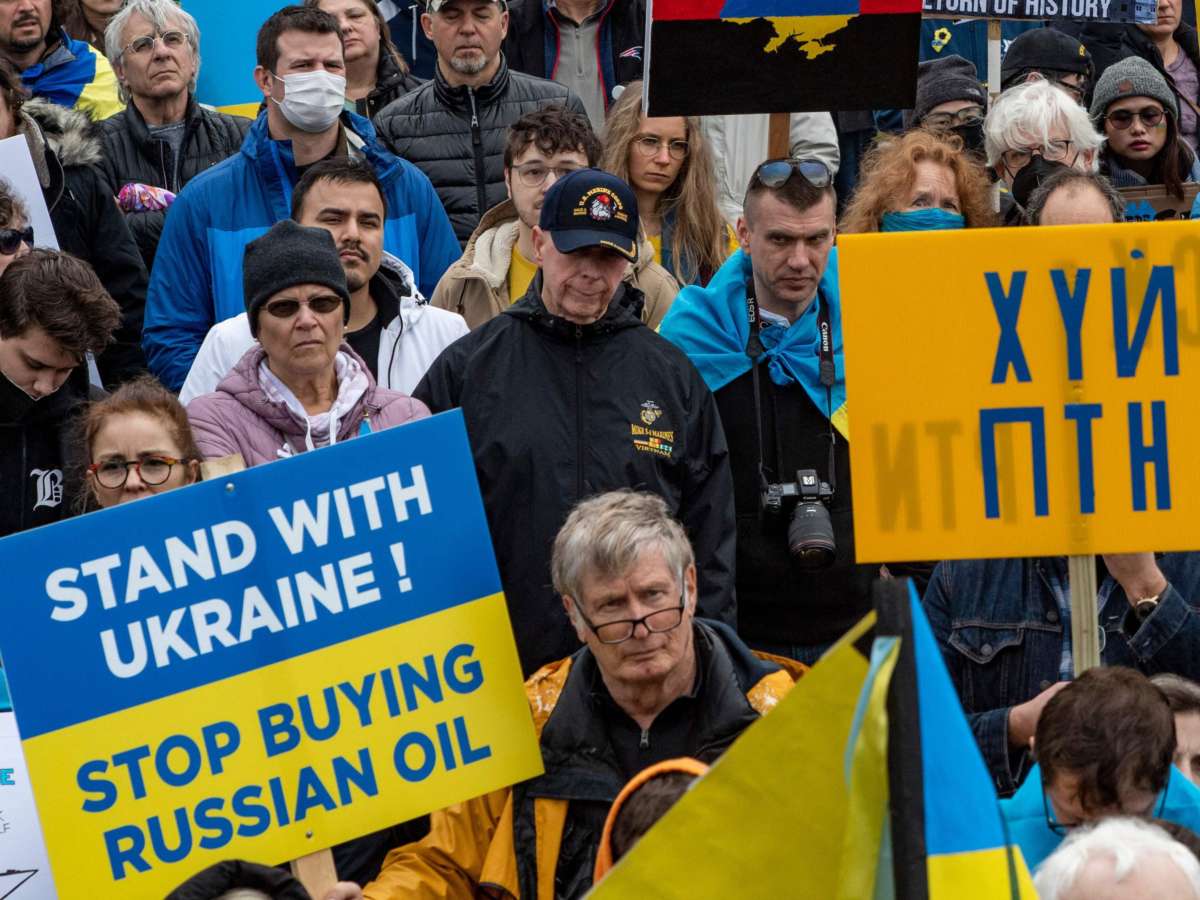 Protesters in Boston call for a ban on Russian oil at a rally for Ukraine on March 6.
Image credit: Joseph Prezioso

President Biden is set to announce a ban on U.S. imports of Russian oil — the latest move to try to punish Moscow for invading Ukraine, a White House official said. The official spoke on condition of anonymity ahead of Biden’s announcement, which is slated for 10:45 a.m. ET on Tuesday.

The ban would mark a divergence in U.S. sanctions from those of its allies and partners, most of whom rely on Russian oil and gas for a significant portion of their energy supplies. Until now, Washington had worked in lockstep with European allies to carve out exceptions to its banking sanctions for energy transactions, recognizing the potential for disruptions to hike prices for consumers.

The White House had initially resisted the move, saying it was trying to avoid actions that would reduce global energy supplies or push up prices for Western consumers even more. “We don’t have a strategic interest in reducing the global supply of energy,” White House press secretary Jen Psaki told reporters last week.

There was a bipartisan push from Congress for the ban

Even though the United States counts on Russian oil for less than 10% of its imports, those sales were too much for many Democrats and Republicans in Congress, who pushed for the ban — which was among the request for assistance from Ukrainian President Volodymyr Zelenskyy during a video call with U.S. lawmakers on the weekend.

“We are going to continue to consult with, continue to convey where our plans, where our discussions are here internally with the Europeans,” Psaki said on Monday, ahead of the announcement. “But I would look at it through a different prism than past coordinated efforts.”

Oil and gas prices have soared

Oil prices hit a 14-year high on Monday ahead of the announcement, and U.S. gasoline prices have now hit a record. The AAA puts the national average at $4.17/gallon, topping the previous high of $4.11 in 2008.

Even before Russia invaded Ukraine, inflation — at its highest level in decades — had become the top issue on the minds of voters ahead of elections this November that will determine whether Democrats hold on to their narrow majority in Congress.

U.S. officials have talked to Saudi Arabia and Venezuela about energy

American officials have been working behind the scenes to try to boost global energy supplies, starting during the weeks leading up to the invasion. The United States and other major energy consumers also jointly released emergency stocks of oil to try to take the edge off markets.

U.S. officials visited Saudi Arabia to try to urge the kingdom to pump more oil. And talks aimed at reviving the Iran nuclear deal have led to optimism that Iranian oil could also lead to a resumption in trade for barrels kept off the market by sanctions.

On the weekend, U.S. officials took the extraordinary step of visiting Venezuela’s Nicolas Maduro — a heavily sanctioned authoritarian leader who Washington does not even recognized as the country’s legitimate president — to talk about energy security. The United States has sanctions blocking dealings with the country’s oil company and central banks. Most of Venezuela’s remaining oil exports going to India and China, with help from Russia.