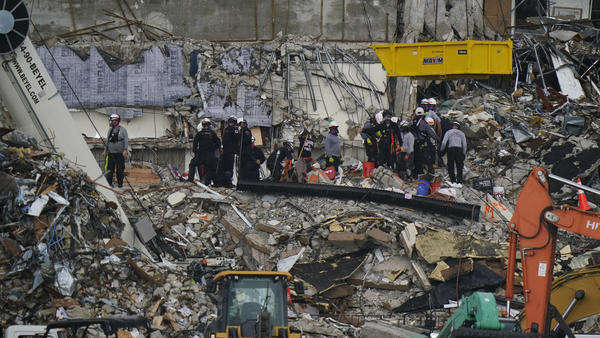 Search and rescue personnel work alongside heavy machinery to sift through the rubble at the Champlain Towers South condo building, where scores of people remain missing almost a week after it partially collapsed, Wednesday, June 30, 2021, in Surfside, Fla. (AP Photo/Lynne Sladky)

President Joe Biden arrived this week in Surfside, where he met with the first responders and families affected by the Champlain Towers collapse and pledged that the federal government will pick up 100% of the costs of the response to the collapse.

As of Friday afternoon, 128 people are still missing, and 20 people have lost their lives in the disaster. During his visit, Biden met local and state officials including Gov. Ron DeSantis.

Danny Rivero of  WLRN joined us to discuss the president’s visit to Surfside.

A mass migration to Florida is happening amid what’s been a red hot real estate market. But there could be a silver lining for prospective buyers: experts say that the current housing market is being overvalued, which could lead to prices falling.

Gov. Ron DeSantis’ polarizing new crackdown on big tech was put on hold this week by a federal judge. The law allows the state to punish social media platforms that ban political candidates and politicians. DeSantis made the law a priority after former President Donald Trump was kicked off YouTube, Facebook, and Twitter following the January 6th insurrection. Federal Judge Robert Hinkle found that the law violates the First Amendment rights of tech companies.

Clay Calvert, a law professor and director of the Marion B. Brechner First Amendment Project at the University of Florida, and Mary Ellen Klas, the capitol bureau chief for the Miami Herald, joined us.