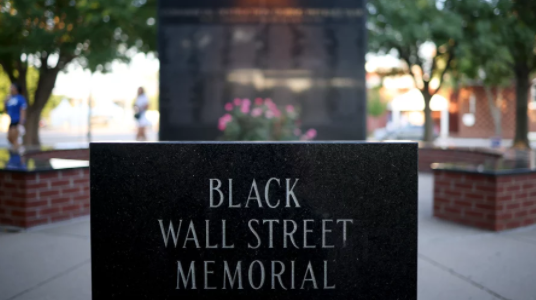 The Black Wall Street Massacre memorial is shown on June 18, 2020 in Tulsa, Oklahoma. President Biden will visit Tulsa on Tuesday for the 100-year anniversary of an attack that left as many as 300 people dead.
Image credit: Win McNamee

President Biden will travel to Oklahoma on Tuesday to mark the 100th anniversary of the Tulsa Race Massacre, a visit that comes amid a renewed reckoning over a long-overlooked attack that left as many as 300 people dead in a community once known as Black Wall Street.

On May 31 and June 1, 1921, an armed white mob attacked the all-Black district of Greenwood. The violent racist mob destroyed the area, leaving 40-square-blocks in ruins and nearly 10,000 people homeless. A century later, it remains one of the worst episodes of racial violence in U.S. history.

For decades after the massacre, the violent attack was covered up and not well known nationally. But as the national conversation has increasingly focused on the issue of systemic racism and police violence over the last several years, the incident has received more attention both in the mainstream news media and popular culture.

During his visit, Biden will meet with survivors of the massacre, all now more than 100 years old. He will also announce several steps aimed at narrowing the racial wealth gap, including ordering the federal government to direct more contracts to small, disadvantaged businesses.

Biden made racial justice a pillar of his presidential campaign, zeroing in on the message repeatedly, especially after the killing of George Floyd by a Minneapolis police officer.

In his inaugural address, Biden said he would help to deliver “racial justice,” promising that “the dream of justice for all will be deferred no longer.”

Biden issued an executive order on his first day in office ordering the federal government to assess which programs may be discriminatory and to identify possible solutions.

But while Biden has talked about tackling “systemic racism,” his administration has faced challenges. Racial disparities have continued throughout the rollout of the coronavirus vaccine, with Black Americans getting vaccinated at a lower rate than whites.

When it comes to police reform, Biden called on Congress to pass the George Floyd Justice in Policing Act by the one year anniversary of his death. While negotiations continue in the Senate, Congress failed to meet that deadline.

Survivors of the Tulsa massacre are still seeking justice and reparations a century later. Three survivors testified before Congress in May about what they saw and the devastating and ongoing impacts of the attack.

“I will never forget the violence of the white mob when we left our home,” one of the survivors, Viola Fletcher, told lawmakers. “I have lived through the massacre every day,” she said. “Our country may forget this history, but I cannot.”