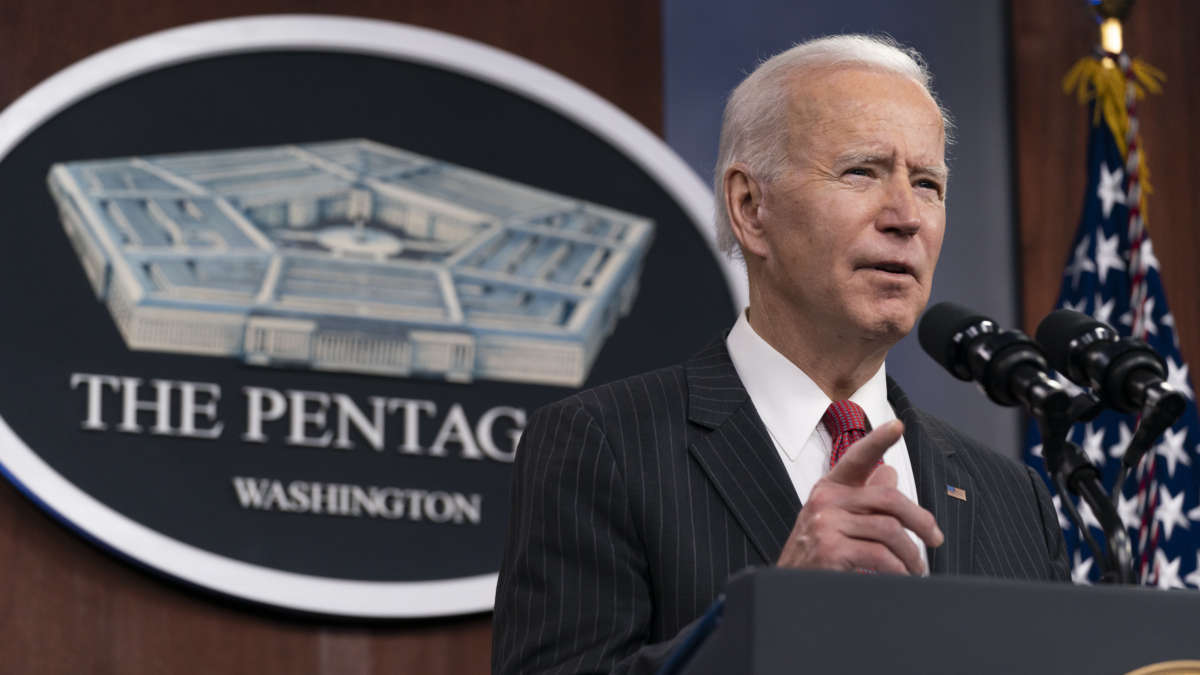 President Biden speaks at the Pentagon on Feb. 10. On Wednesday, he will announce the withdrawal of U.S. troops from Afghanistan after nearly 20 years of war.
Image credit: Alex Brandon

The United States will withdraw all remaining troops from Afghanistan by the 20th anniversary of the Sept. 11 attacks, President Biden announced Wednesday, turning the page on a conflict that has cost trillions of dollars and the lives of more than 2,300 American troops.

“We went to Afghanistan because of a horrific attack that happened 20 years ago. That cannot explain why we should remain there in 2021,” Biden said. “We were attacked, we went to war with clear goals,” he added. “We achieved those objectives. Bin Laden is dead and al-Qaida is degraded in Afghanistan, and it’s time to end this forever war.”

Speaking from the Treaty Room of the White House — where former President George W. Bush first informed the nation of U.S. strikes on al-Qaida training camps in Afghanistan in Oct. 2001 — Biden sought to make the argument that a continued military strategy would not produced the desired outcomes.

“We cannot continue the cycle of extending or expanding our military presence in Afghanistan hoping to create ideal conditions for the withdrawal and expecting a different result,” he said. “I’m now the fourth United States President to preside over American troop presence in Afghanistan, two Republicans, two Democrats. I will not pass the responsibility onto a fifth.”

The withdrawal of U.S. troops represents the most consequential military decision that Biden has made since taking office, and will complete a process that began under the Obama administration, starting with a drawdown from a peak of more than 100,000 U.S. service members in the country in 2011. It’s a decision that makes good on a campaign pledge to end “forever wars,” but carries significant political and national security risks if Afghanistan backslides into a haven for terrorists intent on attacking the United States, a concern raised even by Biden’s Democratic allies in Congress.

Biden outlined a draw down will begin May 1 and conclude by Sept. 11, but he said it would not be a “hasty rush to the exit.” The U.S. will leave Afghanistan “responsibly, deliberately and safely,” he said.

As of 2021, some 2,500 U.S. troops remain in Afghanistan. As many as 1,000 more special operations forces are also reported to be in the country. Biden said the U.S. will continue diplomatic and humanitarian work in the country, including assistance to the Afghan National Defense and Security Forces. But he said it was also now time for other countries to play a bigger role in Afghanistan — Pakistan in particular, but also Russia, India, China and Turkey. Each of those countries has its own overlapping interest in the country — interests that don’t necessarily intersect with U.S. goals in Afghanistan.

Biden’s predecessor, former President Donald Trump, had pledged to the Taliban a full withdrawal of U.S. troops by May 1, which Biden had previously said would be “tough” to meet.

A senior administration official told reporters on Tuesday that the withdrawal would not be conditions-based, as Biden had deemed such an approach “a recipe for staying in Afghanistan forever.”

Some U.S. personnel will remain in the country, which the administration official said would be necessary to protect America’s diplomatic presence in the country. The president also said the U.S. would look to reorganize its counterterrorism operations in Afghanistan to help prevent the reemergence of threats to the homeland.

News of the president’s planned withdrawal has drawn stinging rebukes from leading Republicans in Congress. Addressing reporters on Wednesday, Rep. Liz Cheney of Wyoming, the No. 3 Republican in the House, called it “fundamentally dangerous.”

“Any withdrawal of forces that is not based on conditions on the ground puts American security at risk,” Cheney said. “He’s further, apparently, going to announce that the date for the withdrawal will be Sept. 11. Now I’m not sure why the White House has selected that date, but I can tell you that that is a huge victory, huge propaganda victory, for the Taliban, for al-Qaida.”

“It is a retreat in the face of an enemy,” McConnell said from the Senate floor on Tuesday. “Foreign terrorists will not leave the United States alone simply because our politicians have grown tired of taking the fight to them.”

Among Democrats, the plan has exposed long-simmering rifts in the party about the American presence in Afghanistan. Some have cheered the plan, with progressives such as Sen. Elizabeth Warren, D-Mass., saying the decision shows, “President Biden recognizes the reality that our continued presence there does not make the U.S. or the world safer.”

Others have been far more critical.

“Withdrawal of U.S. troops must be based on the facts on the ground, not arbitrary deadlines,” Sen. Maggie Hassan, D-N.H., tweeted. “After all that our service members have sacrificed, we must ensure that Afghanistan does not once again become a safe haven for terrorists who seek to harm America.”

Warnings about the risks of a draw down have similarly come in from the president’s own intelligence chiefs. An annual worldwide threat assessment released by the Director of National Intelligence on Tuesday cautioned that “the Taliban is likely to make gains on the battlefield, and the Afghan government will struggle to hold the Taliban at bay if the coalition withdraws support.”

Noting the opposition to removing troops from those who insist that diplomacy in the region cannot succeed without the leverage of a continued military presence, Biden said, “We gave that argument a decade,” arguing it had not been effective.

“Our diplomacy does not hinge on having boots in harm’s way,” he said. “American troops shouldn’t be used as a bargaining chip between warring parties in other countries. That’s nothing more than a recipe for keeping American troops in Afghanistan indefinitely.”

The announcement comes as months of U.S.-brokered peace talks between the Taliban and Afghan government have thus far failed to lead to any significant breakthrough. In a tweet ahead of Biden’s remarks, Afghan President Ashraf Ghani said he had spoken with Biden and that the country “respects the U.S. decision and we will work with our U.S. partners to ensure a smooth transition.”

Following his remarks, the president traveled from the White House to visit Section 60 at Arlington National Cemetery following the speech, where U.S. service members killed in Afghanistan and Iraq are buried.