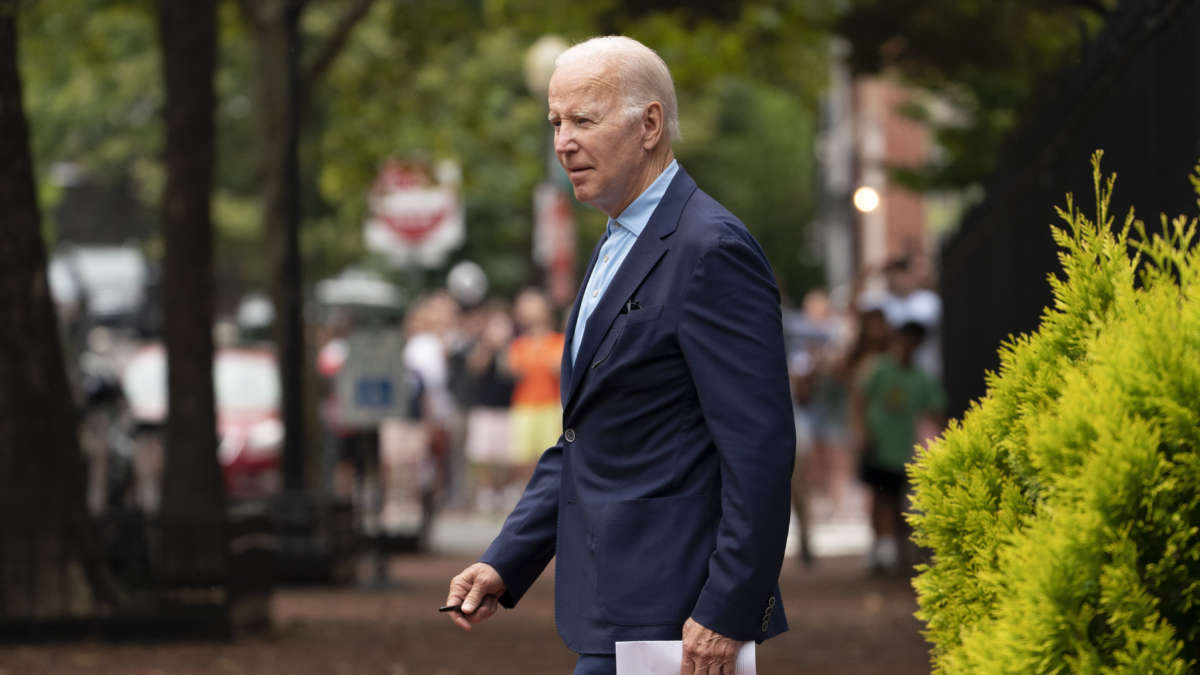 President Biden has tested positive for COVID-19, the White House announced on Thursday.

He is fully vaccinated and twice boosted and, according to White House press secretary Karine Jean-Pierre, “experiencing very mild symptoms. He has begun taking Paxlovid.”

Biden’s last previous test for COVID was Tuesday, when he had a negative test result, the statement said.

While vaccines, booster shots and antivirals reduce the chances for severe illness or hospitalization from COVID-19, the virus presents an increased risk to older people. At 79, Biden is the oldest president in U.S. history. He is fully vaccinated and has received two booster shots, receiving a fourth dose of the Pfizer BioNTech COVID-19 vaccine a day after it was authorized in March for people over 50.

Other than the Massachusetts event, Biden had mostly stayed out of view from cameras since returning from a five-day trip to the Middle East.

If Biden’s condition were to seriously deteriorate, he would have the option of temporarily transferring presidential power to Vice President Harris through the Constitution’s 25th Amendment. Harris served as acting president for a bit more than an hour in November, when Biden underwent anesthesia for a routine colonoscopy during a physical. President George W. Bush and Ronald Reagan also invoked the 25th Amendment for short windows during colonoscopies.

Biden’s diagnosis comes amid yet another COVID wave in the United States, driven this time by the BA.5 variant.

For his first year in office, a cautious approach to COVID had been a defining feature of the Biden Administration. Biden avoided large indoor gatherings, the White House imposed mask mandates, and staffers would regularly hold zoom meetings from behind closed doors in their offices, rather than congregate for in person meetings.

Many of those precautions faded over the course of 2022. The administration packed the East Room for ceremonial events, and even resumed public tours.

Behind closed doors, however, the administration continued to implement stricter COVID protocols around the president. Staffers are tested before meetings with Biden, and they still mask and stay six feet away from him during meetings, according to Jean-Pierre.

Still, in the week leading up to Biden’s positive test, he had lingered for extended conversations, posed for pictures and gave hugs at the Congressional picnic on the White House South Lawn; Biden shook hands — and, controversially, exchanged fist bumps — with leaders in Israel, the West Bank and Saudi Arabia.

Biden did not wear a mask in many of the meetings and other events on the four-day trip.

While Biden had avoided the virus until now, several other high-ranking administration officials have tested positive for COVID-19 over the past two years, including Vice President Kamala Harris, Second Gentleman Douglas Emhoff, Secretary of State Antony Blinken and former press secretary Jen Psaki.

Biden is the latest government leader to contract COVID-19

Several heads of government have contracted COVID-19 since the pandemic began. In January, Canadian Prime Minister Justin Trudeau, who is vaccinated and boosted, announced he had tested positive for the virus.

Former President Trump, then 74, contracted COVID-19 in October 2020, before vaccines were available. Despite public assurances from Trump, White House officials, and doctors who spoke to the press about Trump’s condition, the virus was serious enough that Trump was admitted to Walter Reed Hospital for a weekend.

Trump was treated with remdesivir and the steroid dexomethasone while in the hospital, but many details about his condition were unclear because of discrepancies between accounts from his advisers and his medical team. He resumed holding public events about a week after his diagnosis, which came during a pivotal point during the presidential election campaign.

The Trump White House did not take COVID-19 precautions seriously, and regularly mocked masking and other safety protocols. Shortly before announcing he had tested positive, Trump had presided over a crowded event announcing now-Justice Amy Coney Barrett as his third pick to fill a Supreme Court seat. About a dozen people who were at the event became sick with COVID in subsequent days.

In contrast, the Biden White House put in place strict coronavirus safety rules for its staff, and kept them in place far longer than many Americans did. Biden only stopped masking in public and limiting indoor contacts in March 2022, after cases across the U.S. plummeted in the wake of the omicron variant surge.

When Biden had a noticeably hoarse throat and congestion in early December, the White House physician released a memo saying the president had been tested for COVID three times that week, and was negative.

Biden has staked his presidency around the promise of bringing the pandemic under control through an aggressive, centrally-organized federal response.

In the early months of his presidency, polls showed voters approved of the way Biden was handling the issue, reflecting the relatively rapid distribution of vaccines, and trillions of dollars in COVID relief aimed at boosting testing supplies and safeguarding schools for a return to more widespread in-person learning. But his approval ratings began to sag after several months as the pandemic lingered.

In the wake of the omicron variant, as public opinion polls showed many Americans were fatigued by nearly two years of COVID safety protocols, the administration began talking more about COVID as a long-term challenge to live with, akin to seasonal flu waves, rather than a crisis demanding constant focus.

Biden has fended off questions about his age and health since the beginning of his presidential campaign. Public opinion polls have shown Americans are worried about Biden’s health as he has battled economic woes, resurgent COVID variants, and foreign policy crises.

Now, the Biden administration faces the symbolism of a thrice-vaccinated president still being infected with a virus that has lingered over his time in office.