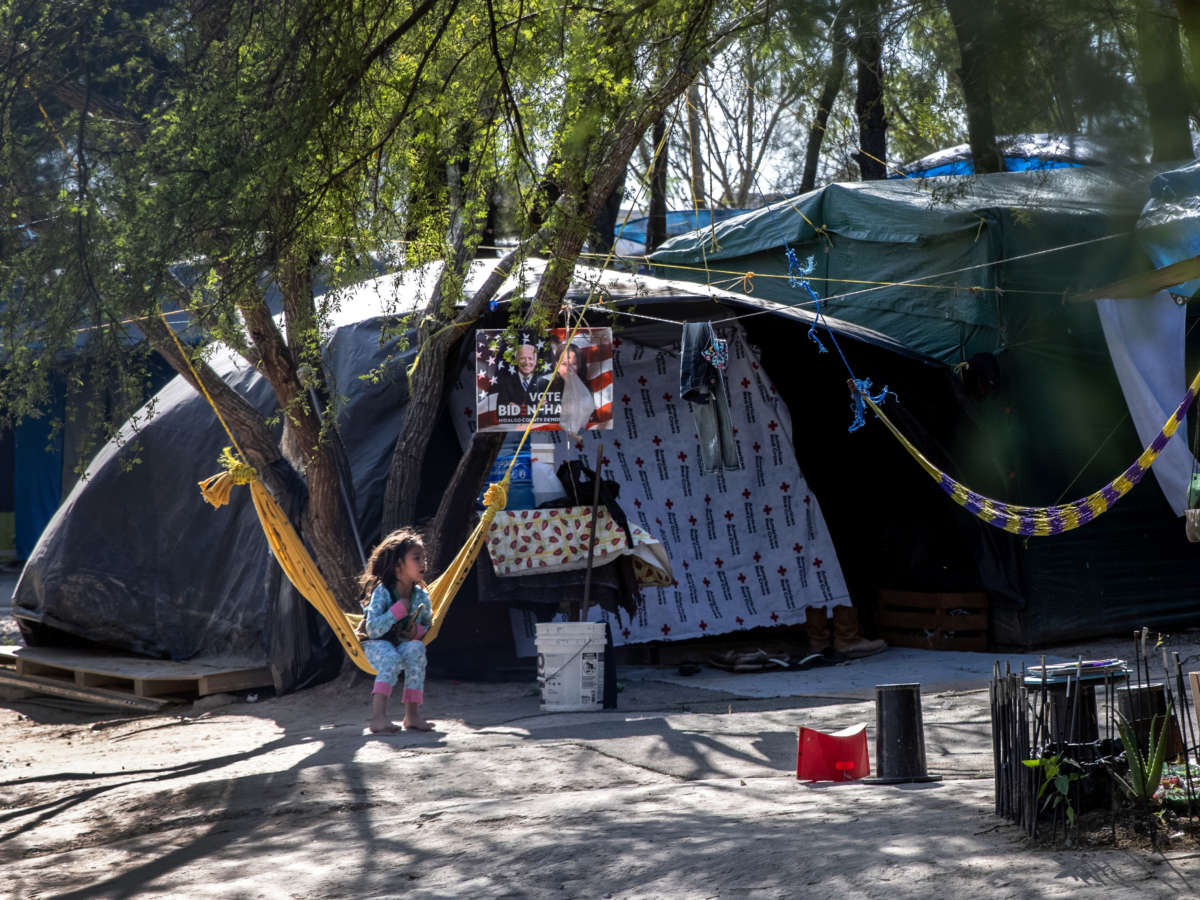 A Salvadorian girl sits inside a camp for asylum seekers on Feb. 07 in Matamoros, Mexico, where some 600 people who left Central America have been waiting for immigration court hearings.
Image credit: John Moore

The Biden administration said it will begin phasing in a new asylum process next week on Feb. 19 to deal with a backlog of migrants seeking asylum on the southern U.S. border, many of whom have been waiting in squalid camps in a state of limbo for court dates because of the Migrant Protection Protocols program.

Under pressure to make good on campaign promises on immigration and facing the prospect that a new wave of migrants seeking to escape desperate situations could flood the border, the Biden team said it plans to start allowing in a trickle of asylum seekers – about 300 people per day – from among an estimated 25,000 people with “active cases” in the now-defunct MPP program.

Former President Donald Trump called the program “Remain in Mexico” because it forced migrants from Central American countries to await asylum hearings outside the United States. Ending the program was one of Biden’s first actions when he took office, part of a sweeping rollback of Trump’s measures aimed at curbing immigration. Biden promised a more “humane” system for migrants.

Senior officials who briefed reporters on a conference call on condition of anonymity said they began work on their new asylum process during the transition, working with international organizations helping migrants, and the Mexican government. But they acknowledged it came together very quickly. Many details have not been spelled out, in part for fear of inundating ports of entry and international organizations with a flood of inquiries from desperate asylum-seekers.

“We need to start asylum proceedings and allow … access to asylum proceedings in the United States for people who have been too long kept in Mexico and been unable to pursue their cases,” a senior Biden administration official said of the decision.

“We all want to make sure that we send the message that we are beginning this within 30 days of the inauguration to demonstrate our commitment to legal pathways to migration, but that it does not change the status at the border,” the official said.

“We don’t want people acting on limited information and potentially rushing to different parts of the border. That would not be safe given the current environment,” a second official said. They emphasized that people should take no action until they learn whether they are eligible, and even then should wait for instructions and not travel to the border.

Migrants who believe they are eligible will first register with NGOs, who will identify those who are most vulnerable and stuck in limbo the longest. The Department of Homeland Security is building “electronic portals” for migrants to be able to register and check their status.

Migrants will find out the details of the new system through social networks. “We’ll be doing a huge amount of media. We’ll be working with our international organization partners who have excellent social media networks that reach migrant communities to make sure that people understand who will be eligible for this program and who will not” one of the officials said.

After initial screening by the NGOs – which are not yet being revealed – migrants will be given an appointment to go through a port of entry. They will be first tested for the coronavirus and will be equipped with masks.

The asylum seekers will be enrolled in “alternative detention programs” after they cross the border to a final destination inside the country where their asylum cases will eventually be heard, the officials said. No court proceedings will occur at the border.