Biden Takes Muted Approach To Violence In Israel And Gaza 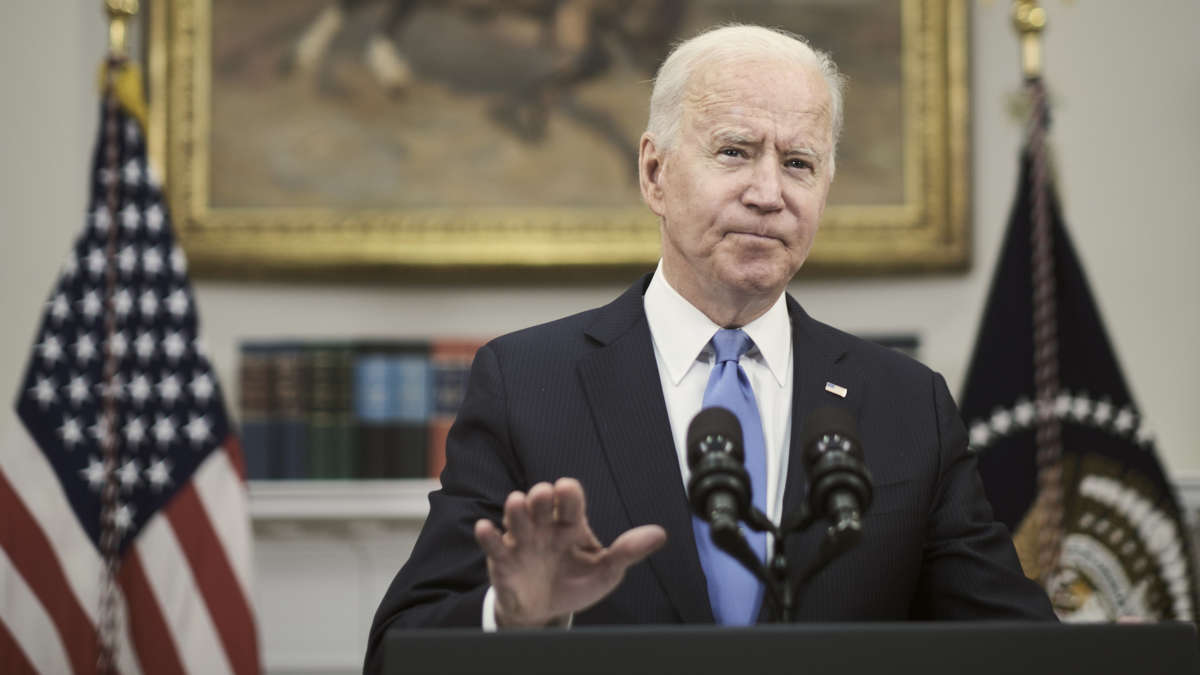 President Biden answers a question about the conflict between Israel and Hamas militants on Thursday after delivering remarks at the White House on the Colonial Pipeline incident. His public comments on the situation in the Middle East have been limited while the administration says it is focused on diplomacy behind the scenes.
Image credit: T.J. Kirkpatrick

As Hamas rockets have rained down on Israeli cities, Israeli airstrikes and artillery have crumbled buildings in the Gaza Strip, and violent mobs have attacked one another in Israel’s streets, President Biden has remained mostly muted about the escalating crisis.

Biden did not issue any hastily arranged remarks on the Middle East violence, or even bring up the topic himself when he appeared in public. The times Biden spoke publicly on the matter came when reporters specifically asked about it. And when he talked, the president appeared to weigh every word very carefully, and spoke in muted tones.

“My expectation and hope is that this will be closing down sooner than later,” Biden said at the White House Wednesday.

“Israel has a right to defend itself when you have thousands of rockets flying into your territory,” Biden added. “My hope is that we’ll see this coming to conclusion sooner rather than later.”

This low-key public approach, the White House says, is by design. The Biden administration is prioritizing behind-the-scenes diplomatic outreach by Biden, Secretary of State Antony Blinken, national security adviser Jake Sullivan and others.

“Constant contact” is how Biden phrased it to reporters. He has personally spoken to Israeli Prime Minister Benjamin Netanyahu. Blinken spoke to Palestinian Authority President Mahmoud Abbas. A State Department envoy has traveled to the region. And calls are being placed to officials in Egypt, Jordan and Qatar — countries the White House sees as having communication and influence with the Hamas militants launching rocket attacks.

Biden’s cautious public response is perhaps amplified by the lingering contrast to the way former President Donald Trump weighed in relentlessly on every global topic, including even how to put out the fire at Notre Dame Cathedral and a mysterious, nonexistent crisis in Sweden.

“I think so far they’re striking the right balance of making sure it’s clear it’s a priority of talking to as many sides as they can, but also not creating these expectations that the U.S. is going to swoop in and magically end this,” said Ilan Goldenberg, who helped coordinate the U.S. State Department’s Israeli-Palestinian diplomacy toward the end of the Obama administration. He now heads the Center for a New American Security’s Middle East Security Program.

Like many areas of Mideast diplomacy, Goldenberg said presidential statements are a high wire act. On one hand, “it’s important for the president to weigh in and make clear it’s a priority, because that sends a message to all the parties in the region that the U.S. cares about this issue.”

But weighing in too much creates its own problems, according to Goldenberg, especially since the Biden administration has made it clear it’s much more interested in focusing foreign policy resources on competition with China and economic issues that directly affect the American middle class, rather than getting caught up in Middle Eastern conflicts that have frustrated numerous U.S. presidents.

“Having the president or other senior officials weighing in relentlessly and constantly starts to diminish [efforts], because we can’t actually follow it up with the kind of action, that decisive action that ultimately ends the conflict,” Goldenberg added.

Asked what the White House has been able to change through its phone calls to Israeli, Palestinian and other regional leaders, a national security official, speaking anonymously to discuss sensitive matters, pointed to a decision to change the route of an Israeli parade through Jerusalem to avoid an area that has been a point of conflict, as well as the delay of a key Israeli Supreme Court decision about whether Palestinians can legally be evicted from Jerusalem homes to make way for Jewish settlers.

“I don’t know if the U.S. intervention was decisive in that, but it was significant and meaningful and I think played a role,” Goldenberg said. “Unfortunately, it came a little too late and things had already escalated.”

Even as he has limited his public statements, Biden has been criticized for what he is — and isn’t — emphasizing.

Many former Trump White House officials have panned Biden for not making a more high-profile show of support for Israel. They view the Abraham Accords Jared Kushner helped forge between Israel and a number of Arab neighbors as among the administration’s most lasting accomplishments, and they were lauded by Biden officials as they took over earlier this year.

At the same time, several progressives argue Biden has been muted in his sympathy for Palestinians being killed in Gaza, particularly his statement that “there has not been a significant overreaction” by Israel, referring to Israel’s air and mortar strikes in retaliation to the rocket attacks.

Netanyahu made a point to thank his “friend, President Biden,” for acknowledging Israel’s right to self defense in an otherwise blistering statement Friday that warned Hamas militants “are paying, and will pay, a very heavy price for this. This is not yet over.”

“If we have historically said and committed to a role as an honest broker, then we must fulfill that role,” New York Rep. Alexandra Ocasio-Cortez said on the House floor Thursday. “The president and many other figures have said Israel has a right to self-defense, and this is a sentiment that is echoed across this body. But do Palestinians have a right to survive?”

“This is not about both sides,” she added. “It’s about an imbalance of power.”

Israel has much heavier firepower and, along with Egypt, has restricted the movement of people and goods into Gaza for years.

The White House has pushed back against that characterization. A national security official argued that every statement the administration has released has broadly condemned violence that results in civilian casualties, no matter where it originates.

Still, given the criticism, it was notable that a Friday afternoon Biden statement marking the Muslim holiday of Eid noted “the situation in the Holy Land is weighing on Muslims everywhere.”

“Palestinians—including in Gaza—and Israelis equally deserve to live in dignity, safety and security,” Biden said in the statement. “No family should have to fear for their safety within their own home or place of worship. We think most about the children in these societies who face trauma from a conflict far beyond their control.”