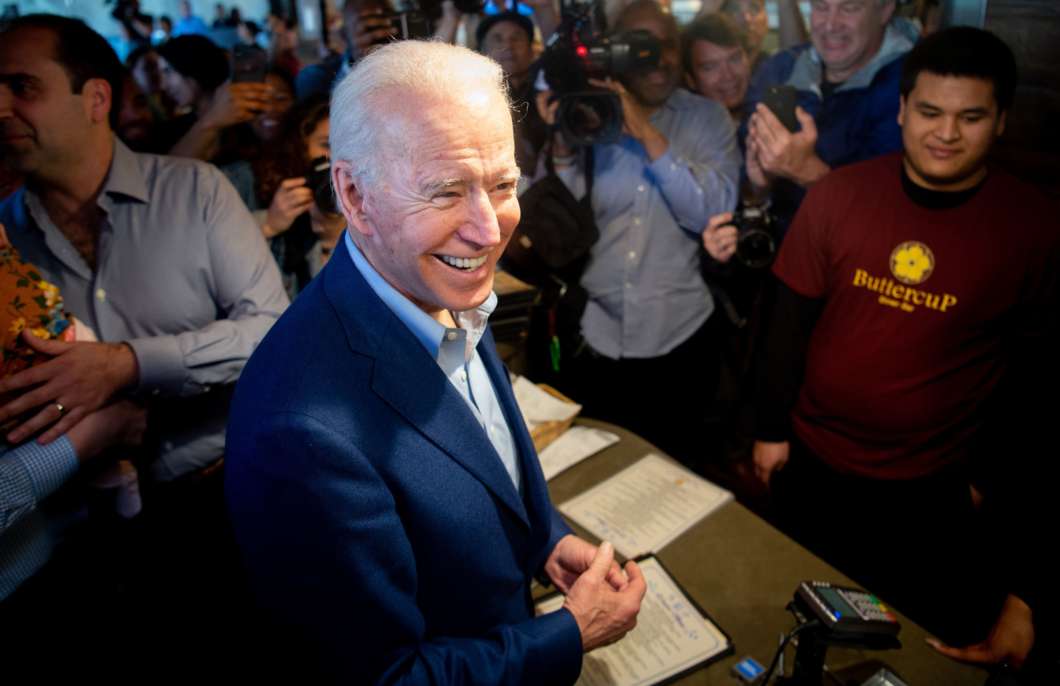 Democratic presidential candidate Joe Biden buys a pie at Buttercup Diner in Oakland, Calif., on Tuesday. He swept a number of states in the biggest night of the primary season.
Image credit: Josh Edelson

Momentum and timing matter in politics – and both helped former Vice President Joe Biden mount a comeback from almost-left-for-dead to being the alternative to Vermont Sen. Bernie Sanders, who went into Super Tuesday with front-runner status after significant wins in early states.

The Democratic presidential race at one point had almost two dozen candidates, but now it’s down to a contest between two men representing dueling ideological poles of the party.

Sanders has energized the progressive wing with promises to transform his party and dramatically expand the government’s role.

Biden’s pledge to fight for the “soul of America” has rallied centrists around him, largely focused on the question of electability against President Trump and Biden’s broader ability to help congressional candidates down-ballot in 2020.

“For those who have been knocked down, counted out, left behind — this is your campaign,” Biden said to supporters in Los Angeles late Tuesday evening.

Biden capitalized at warp speed on his big win in South Carolina’s primary on Saturday.

Biden went from fourth place in Iowa, fifth place in New Hampshire and a distant second in Nevada to handily winning a state with a large African American population — a constituency that is responsible for his rapid rise.

That blow-out forced the centrists out of the race, leaving the moderate lane to Biden. His former rivals who split the vote just a week earlier went from jabbing him on the debate state to endorsing him and cutting ads on his behalf.

Minnesota Sen. Amy Klobuchar and Pete Buttigieg, former mayor of South Bend, Ind., ended their campaigns after Biden’s South Carolina win and joined him on stage in Texas on Monday, the day before Super Tuesday. Biden ended up winning the state.

Former Texas Rep. Beto O’Rourke, who dropped out of the presidential race November 1, also endorsed Biden at the Texas rally.

A key factor fueling Biden’s rebound is that late-deciding voters broke for him by a margin of 2-1, according to exit polls conducted by NBC News in 12 Super Tuesday states.

The former vice president faced criticism for poor debate performances, weak fundraising and weak campaign field operations in key states, but he managed to win in a range of geographic areas.

Biden dominated in the South where African Americans — a key constituency of the party — helped him carry Virginia, North Carolina, Alabama, Arkansas, Oklahoma and Tennessee.

He also won Minnesota — a state where Sanders campaigned a day before the primary. And Biden won Massachusetts, home state of Sen. Elizabeth Warren and where Sanders held a big rally over the weekend.

Another reason voters likely rallied to Biden is that they viewed him as a safer choice at a time when it’s clear President Trump and congressional Republicans are eager to tag all Democrats as “socialists” — a label Sanders uses about his own policies.

Virginia freshman Democratic Rep. Abigail Spanberger endorsed Biden after he won her home state. She told NPR that the GOP will nationalize the race regardless of who the Democratic nominee is, but said it would be better for her if Biden was the one squaring off against Trump.

“In any case, it would be desirable for me to be aligned on policy with the person at the top of the ticket because it’s just one less conversation to have,” she said Tuesday night.

Sanders won the California primary, the largest state with the largest delegate haul, The Associated Press projected. He also won his home state of Vermont. Sanders won Colorado, a state with a significant Latino population; and Utah.

Sanders referred to his camp’s battle with the Democratic Party as he spoke to supporters in Essex Junction, Vt., on Tuesday night.

As he regularly does at his rallies, often drawing crowds larger than Biden’s events, Sanders touted his ability to build a multi-generational, multi-racial movement. His campaign repeatedly touts his ability to draw more younger and first-time voters to the ballot box, though exit polls showed lower turnout for young people.

Sanders’ loyal following helped position him at the top of national polls, but his big wins in the early contests of New Hampshire and Nevada also showed his strength with a range of key voting blocs like labor, Latinos and the white working class.

But that momentum was blunted once Biden won in South Carolina.

Bill de Blasio, mayor of New York City and a Sanders’ supporter, told NPR that Sanders has a better chance to beat Trump in a general election because he can attract cross-over voters in key states that the president won in 2016, like Michigan, Wisconsin and Pennsylvania.

“He’s got a lot he can cash in on ahead,” de Blasio said.

Both Biden and Sanders stressed that their campaigns were focused on getting Trump out of office — and described policies they believe will attract people who aren’t convinced the strong economy is translating to gains in their own lives.

Biden didn’t mention Sanders directly, but argued Tuesday night he also had new energy that would make the difference against Trump.

“People are talking about a revolution, we started a movement, we’ve increased turnout. The turnout turned out for us. That can deliver us to a moment where we can do extraordinary, extraordinary things,” he said.

Sanders more directly engaged on the contrast between his record and Biden’s. Without naming the former vice president, Sanders honed in on the Iraq War — an issue that has been litigated in previous Democratic primaries.

Sanders proudly noted he voted against the war in Iraq, while “another candidate” backed it. He also argued his positions on trade, financial regulation and health care were more in line with the core supporters of the party.

He said he would ultimately prevail, saying, “Tonight I tell you with absolute confidence that we are going to win the Democratic nomination and we are going to defeat the most dangerous president in the history of this country.”

“The most important person”

Michael Bloomberg, the billionaire businessman and former mayor of New York City, was on the ballot for the first time Tuesday after skipping the first four Democratic contests.

But while Bloomberg spent roughly $500 million of his personal fortune on the campaign he had little to show for it. He failed to win a single state and picked up delegates in only a smattering of them.

Bloomberg admitted his only path to the nomination would be through a contested convention, but as the polls started to close on Tuesday, his campaign manager had a different take.

Sheekey said the campaign would assess its plans after Tuesday’s results were in.

But if Bloomberg chooses to step aside as a candidate, he could play a key role helping counter the fundraising juggernaut of the Trump campaign and its allies.

As much as Biden’s South Carolina win revived his campaign, March 3 may mark the moment when he convinced his party to take another look at whether he’s the right candidate to take on Trump in the fall.

“They don’t call it Super Tuesday for nothing!” Biden proclaimed.