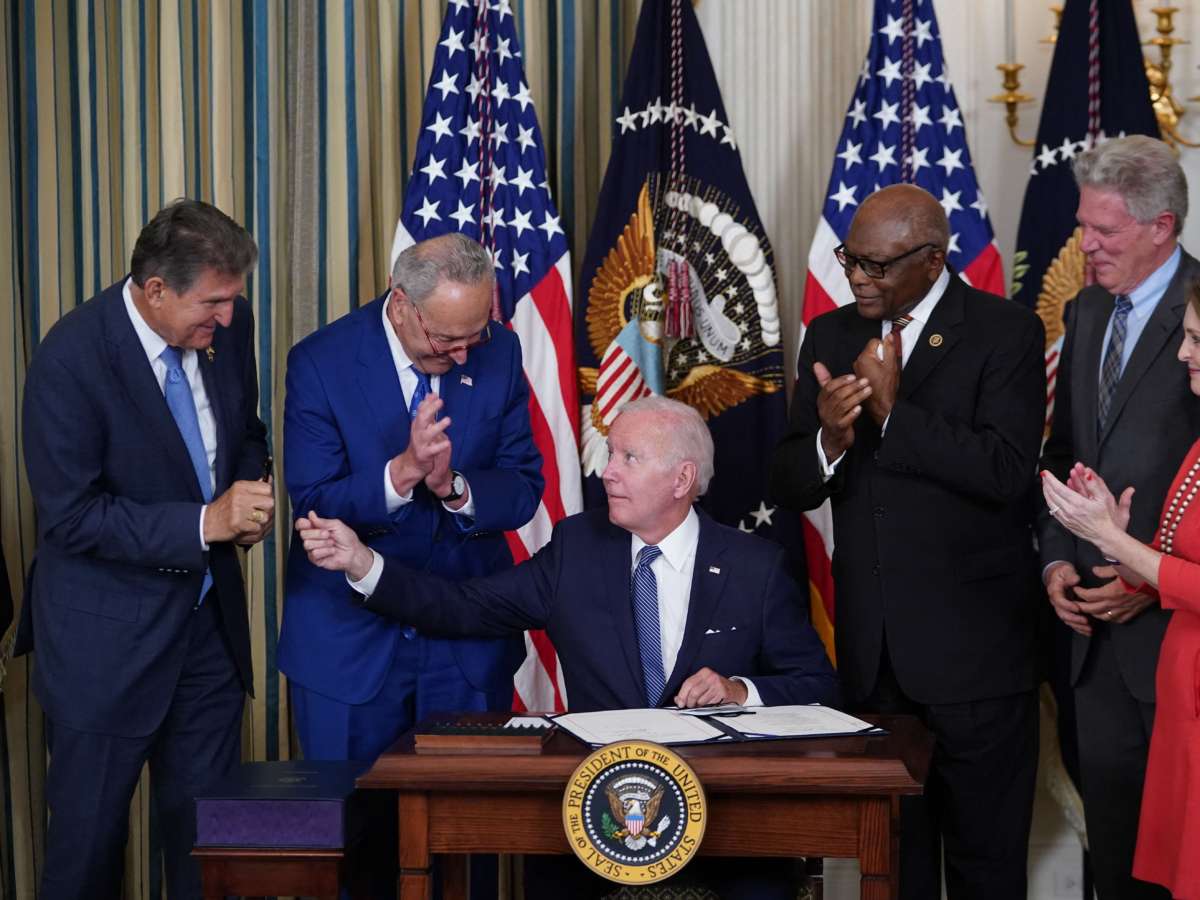 President Biden hands a pen to Sen. Joe Manchin during the signing ceremony for the Inflation Reduction Act. Manchin was a key hold-out during negotiations, insisting on a smaller spending bill.
Image credit: Mandel Ngan

President Biden signed Democrats’ hallmark spending bill into law on Tuesday, a major legislative victory punctuating a string of bipartisan legislative achievements that Democrats hope to capitalize on ahead of the upcoming midterm elections.

“The American people won, and the special interests lost,” Biden said, noting that pharmaceutical companies had lobbied against measures to lower prescription drug costs for people on Medicare.

“Every single Republican in the Congress sided with the special interests in this vote,” Biden said. “That’s the choice we face: we can protect the already-powerful, or show the courage to build the future where everybody has an even shot.”

This legislation has been a year in the making. After West Virginia Democrat Sen. Joe Manchin nixed earlier talks, citing concerns over approving more spending during record inflation, Democrats struggled to find a path forward.

But fortunes shifted in July, when Manchin and Sen. Majority Leader Chuck Schumer, D-N.Y., struck a deal. After a marathon voting session, the Senate passed the legislation through the budget reconciliation process, with every Democrat voting in favor and one tie-breaking vote from Vice President Harris. No Republicans voted for the bill.

Manchin had a spot on the dais for the bill signing and received a round of applause during Biden’s remarks when the president quipped, tongue in cheek: “Joe — I never had a doubt.”

Biden interrupted his vacation to sign the legislation, although the signing ceremony itself was small, given that Congress is out of session and most members are out of town. The White House plans to hold a larger celebration on Sept. 6 — part of a plan to promote the bill ahead of November elections.

Here’s what the legislation does on climate

The sweeping bill allocates more than $300 billion to be invested in energy and climate reform. It’s the largest federal clean energy investment in U.S. history, although it falls short of what progressive Democrats and climate activists had originally called for.

“This bill is the biggest step forward on climate ever — ever — and is going to allow us to boldly take additional steps toward meeting my climate goals,” Biden said.

Democrats say the bill will lower greenhouse gas emissions by 40%, based on 2005 levels, by the end of the decade, which falls short of Biden’s original goal.

The climate provisions I sign into law today are a big deal. Let me explain why: pic.twitter.com/b4QTqXGSaz

There’s a cap on prescription drug costs for Medicare

On health care, the bill enables the federal health secretary to negotiate the prices of some drugs for Medicare. It also caps out-of-pocket prescription drug costs for people on Medicare at $2,000, effective in 2025.

The bill also provides a three-year extension on health care subsidies in the Affordable Care Act that were originally passed in last year’s pandemic relief bill.

On taxes, the legislation establishes a 15% minimum tax for corporations making $1 billion or more in income, which is estimated to bring in over $300 billion in revenue.

Democrats had originally wanted to include funding for childcare, universal pre-K and paid family leave — all items that were dropped over the course of negotiations.

And despite the bill’s name, the nonpartisan Congressional Budget Office says the Inflation Reduction Act will have a negligible effect on inflation in 2022 and 2023.

Now Biden and Democrats want to get credit

With three months to go before midterm elections, Democrats want to promote the benefits of the legislation. Some will kick in right away, including the energy efficiency tax credits. But other benefits, like lower costs for prescription drugs, won’t be felt before voters head to the polls.

Democrats will need to break through a barrage of negative headlines about the anniversary of the chaotic U.S. withdrawal from Afghanistan — as well as ongoing voter concerns about inflation.

The White House says other events will showcase how Biden worked to get a string of bipartisan measures passed, including gun safety legislation and a bill to boost domestic production of semiconductor chips in order to stay competitive with China.

As part of its digital campaign, the White House plans to unveil a interactive website on climate incentives, to allow families and small businesses to easily access information about tax credits.

Plans for a media blitz include using various online and social media avenues to spread Democrats’ message. The White House plans to hold briefings with influencers and content creators to “amplify our message on their own online social media channels,” according to a memo on the plans.