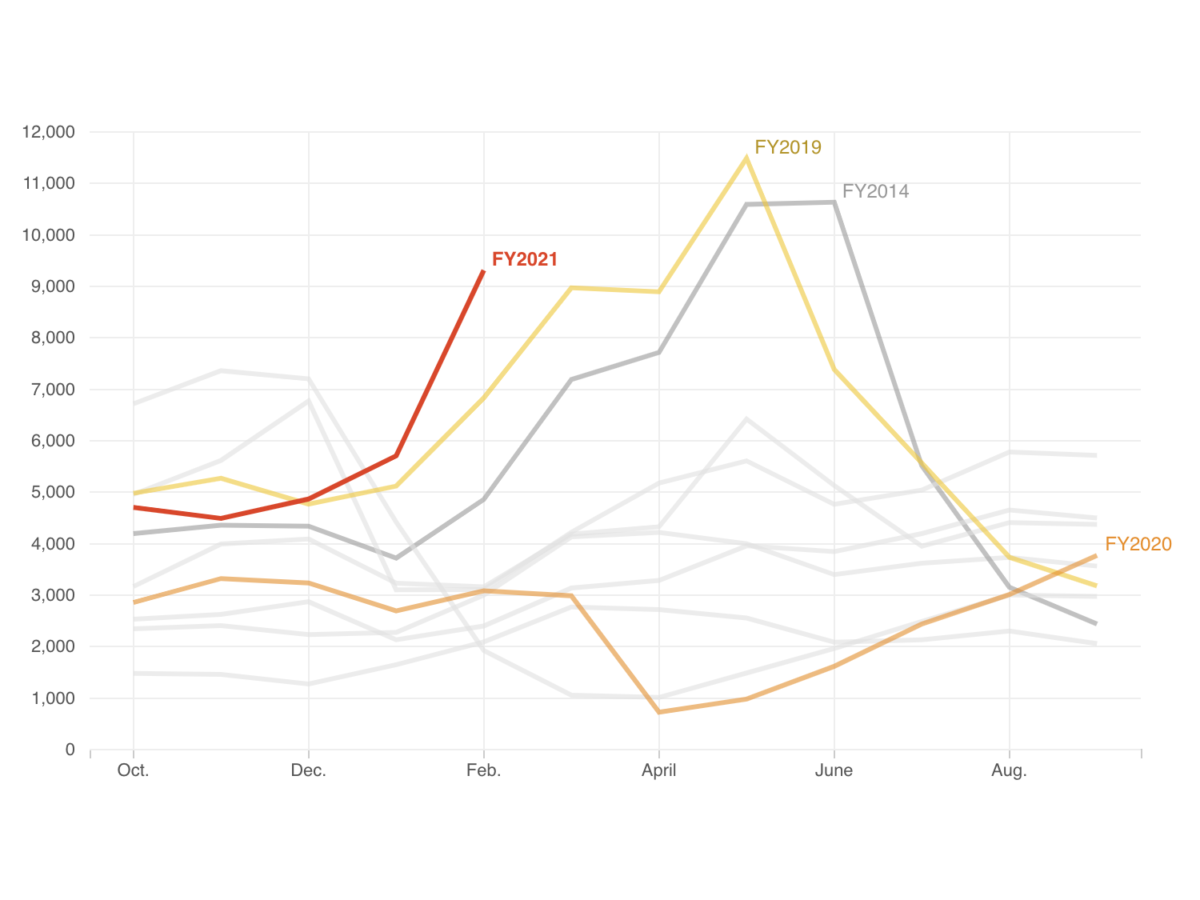 President Biden claimed Thursday in his first press conference since taking office that “nothing has changed” compared to earlier influxes of migrants and unaccompanied children at the border.

“It happens every single, solitary year,” he said, pushing back on questions about whether his own policies contributed to the situation on the border.

“There is a significant increase in the number of people coming to the border in the winter months of January, February, March,” he said. “That happens every year.”

The Biden administration has been grappling with surging numbers of migrants, especially children arriving at the border without their parents.

It is true, as Biden states, that numbers often rise during the early months of the year when temperatures begin to warm. But the number of children arriving today without their parents is considerably higher than at the same time in 2019 and 2020.

In fact, the number of unaccompanied children being apprehended by the Border Patrol were higher in February than they’ve been any previous February since 2014, according to data shared with NPR by the nonpartisan Migration Policy Institute.

Authorities encountered 9,297 children without a parent in February, a 30% increase from 2019 during the last major influx of unaccompanied children.

To be sure, it’s still below the peaks of 11,000 unaccompanied minors who arrived in May 2019 and above 10,000 in June 2014, but experts and administration officials expect those records to be broken this year.

Homeland Security Secretary Alejandro Mayorkas said last week that U.S. agents are on pace to intercept more migrants on the southwest border in 2021 than they have in the last two decades.

The reasons for the influx of migrants from Central America are vast and complex. They are also deeply personal for each family who chooses to leave their home.

Jessica Bolter, an analyst at the Migration Policy Institute, says they involve a mix of longstanding factors, such as poverty and corruption, as well as new factors such as two recent hurricanes and widespread unemployment due to the pandemic.

“And then we also, of course, do have a new administration coming into office in the U.S. that has promised to treat migrants more humanely,” Bolter said. “And that’s something that’s not lost on migrants. And it’s certainly not something that’s lost on smugglers who are likely to exaggerate kind of any change in U.S. policy to increase their business and get migrants to come with them to the US Mexico border.”

U.S. Customs and Border Protection agents apprehended an average of 5,000 undocumented immigrants per day over the past 30 days, including about 500 unaccompanied children, according to a senior Border Patrol official who spoke to reporters on Friday.

The official said the influx was “much different” than previous years, citing the large number of unaccompanied children and families traveling.

As of Wednesday, more than 5,000 unaccompanied migrant children and teens were stuck in Border Patrol facilities waiting for beds in more appropriate shelters built for children, according to Department of Homeland Security data viewed by NPR.

The Border Patrol official told reporters Friday that agents are trying to discharge the children from warehouses and jail-like holding cells as quickly as possible, but there’s a bottleneck because the government can’t open child shelters run by the Department of Health and Human Services fast enough to accommodate everyone who’s crossing.

“Unfortunately, on any given day, we may have upwards of 9,000 people in custody, which certainly puts a strain on our resources,” the official said.

The Biden administration is working with other agencies trying find more bed space. They’re using places like the San Diego Convention Center to hold unaccompanied minors so they’re not sleeping in cells on the border.

The challenges in Central America – and at the border – have become cyclical.

Like under previous presidents, the Biden administration was not prepared to shelter this many arriving children.

But Bolter questions whether this is some kind of a new “crisis.” She says this part of the same flow of migrants that the United States has been experiencing over the last decade.

“It’s really all part of the same flow,” Bolter said. “This is something – these flows of Central American children and families – that administrations of both parties have struggled with, how to how to deal with them.”

The Biden administration also has long term plans to deal more directly with these issues in Central America. They include developing more legal avenues to seek asylum so that migrants don’t feel they have to choose illegal avenues. And Biden just sent three top officials to Mexico and Guatemala as part of efforts to tackle the root causes of migration, something he also just tasked Vice President Harris with leading.

Juan Gonzalez, the National Security Council’s senior director for the Western Hemisphere, was part of that team.

He told NPR’s Steve Inskeep Friday that the administration wants to help countries in the region create the right environment for international investment that drives economic prosperity, but also has ways to encourage better behavior from money launderers and other corrupt officials.

“So that’s a carrot,” he said. “In terms of sticks, the president during the campaign, and we’re actually working to implement this now under the vice president’s leadership, is committed to developing a regional anti-corruption task force. There are a lot of things that the United States and its partners can do to impose sanctions, to pull visas, to freeze assets of individuals involved, involved in money laundering.”