Biden: ‘I Do Not Regret My Decision’ To Withdraw From Afghanistan 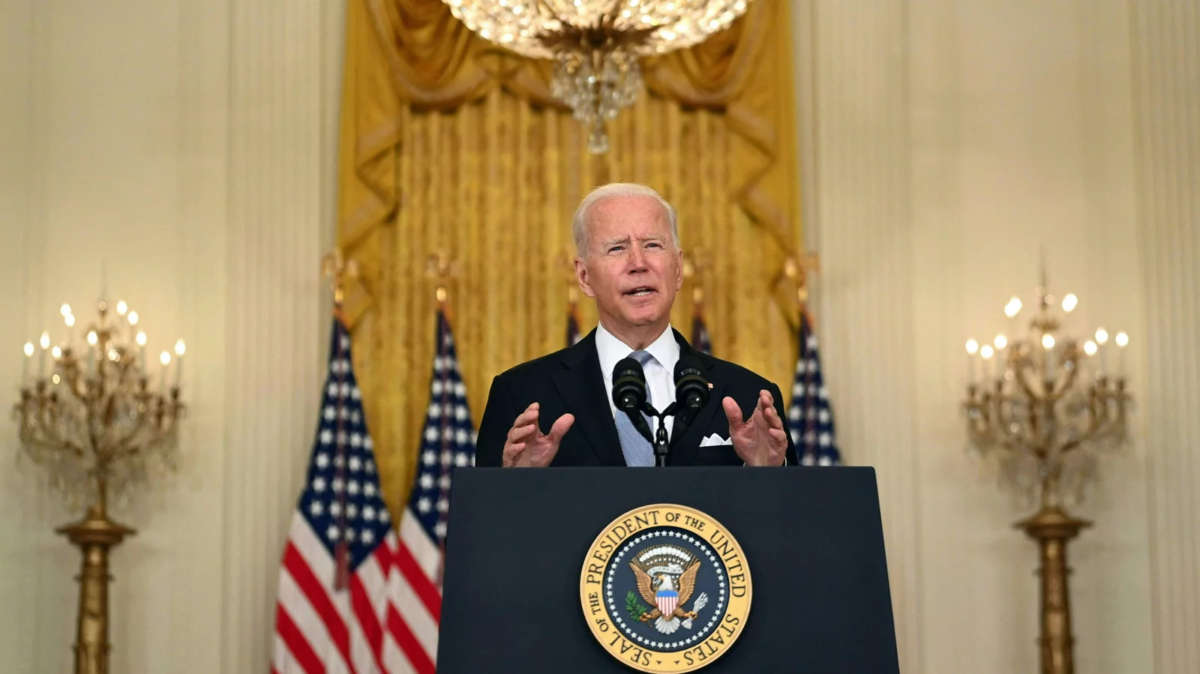 President Biden on Monday defended his decision to withdraw the U.S. military from Afghanistan despite the swift Taliban takeover of the country and chaotic scenes unfolding in its capital of Kabul as people crowd the airport in an effort to flee.

“I am president of the United States of America, and the buck stops with me,” he said. “I am deeply saddened by the facts we now face, but I do not regret my decision.”

Speaking about the Taliban’s sudden ousting of the U.S.-backed government, Biden acknowledged, “The truth is this did unfold more quickly than we anticipated,” but he added he would not pass the war on to a fifth U.S. president or say that “a little more time” in Afghanistan “will make all the difference.”

Last month Biden had said it was “highly unlikely” that the Taliban would overrun the country when U.S. forces departed.

Though Biden said he accepted responsibility for how the withdrawal is unfolding, in White House remarks he largely blamed the Afghan military for not standing and fighting against the Taliban as well as Afghan political leaders for fleeing.

A senior administration official told NPR on Monday that most U.S. Embassy staffers have been evacuated from Kabul, with a small footprint on the ground at the city’s airport. The official said the administration expects it will take “a few more days” to continue to move those people out.

The White House views the situation as volatile and serious, the official said, but not a worst-case scenario since there has not — so far — been widespread violence around Kabul.

The official also defended the administration’s preparations for the evacuation. “This is a scenario that sadly we were ready for,” the official said — though U.S. plans have been changed several times in recent days as the evacuations have been launched, including sending in thousands of U.S. troops to help the process.

Criticism of how the U.S. exit was orchestrated has been bipartisan.

Some hawkish Republicans have blasted Biden for failing to prevent the Taliban takeover and warned of the potential risk of the renewed growth of terrorist cells.

Others, such as former President Donald Trump, who inked a 2020 deal with the Taliban and set the timeline in place for the U.S. exit, focused on the withdrawal itself.

“It’s not that we left Afghanistan. It’s the grossly incompetent way we left!” Trump said in a statement at the end of Biden’s remarks.

“This is President Biden’s Saigon moment,” House Minority Whip Steve Scalise, R-La., said Sunday on CBS’ Face the Nation, referring to the chaotic departure from Vietnam in 1975. “And, unfortunately, it was very predictable. It seems like many in President Biden’s intelligence community got this devastatingly wrong.”

Some Democrats have made similar criticisms and largely have focused on the potential humanitarian crisis, particularly for women and girls left behind after the withdrawal. Other Democrats have been supportive of the decision but are privately hand-wringing over the potential political problem the chaotic exit creates for the party in power.

“There was never a good time to withdraw”

The fast collapse of the Afghan government and the lack of a fight from the Afghan military, Biden said, reinforced his decision to leave — and that a military solution to a secure and stable Afghanistan didn’t exist.

“There was never a good time to withdraw U.S. forces,” Biden added. “That’s why we are still there.”

The president pointed out that going into Afghanistan was about getting those “who attacked us” on 9/11, to make sure al-Qaida and other terror groups can’t use Afghanistan as a place from which to attack the U.S. again.

He noted that al-Qaida leader Osama bin Laden was killed a decade ago and that the mission was “never supposed to be nation-building” or “creating a unified, centralized democracy.”

The goal, he said, was “preventing a terrorist attack on the American homeland” and the mission needs to be “narrowly focused on counterterrorism.”

That is something Biden has been saying for more than a decade since he was former President Barack Obama’s vice president.

Biden added that the U.S. needs to “face threats of today,” “not yesterday’s.”

The president, who had been following the crisis overseas from Camp David, returned to the White House on Monday afternoon to make the speech as thousands of U.S. forces have been sent back in to secure the Kabul airport to finish evacuating Americans and others who helped the U.S. during the war.

Biden took no questions from reporters after his remarks and then returned to Camp David.

He acknowledged that the scenes on the ground are “gut-wrenching” for U.S. veterans and aid workers who spent years serving and working in Afghanistan.

“For those who have lost loved ones in Afghanistan and for Americans who have fought and served in the country, this is deeply, deeply personal,” he said.