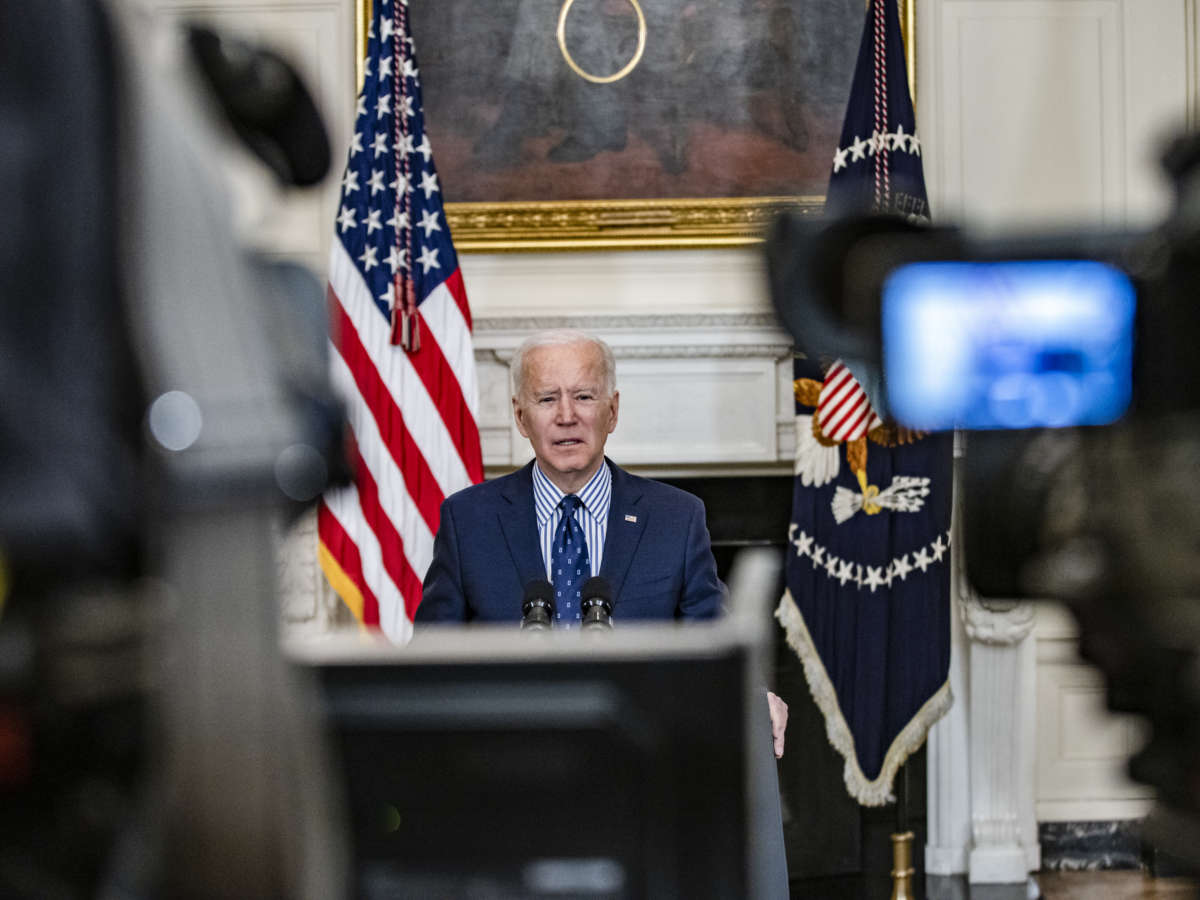 President Biden speaks from the State Dining Room of the White House on Saturday, following the Senate's passage of his COVID-19 relief package by a 50-49 vote.
Image credit: Samuel Corum

In remarks after a divided Senate approved his $1.9 trillion coronavirus relief plan, President Biden praised lawmakers for securing the additional round of aid and thanked the American people for making it possible through their “overwhelming bipartisan support.”

The “American Rescue Plan” has been a priority of the Biden administration, and is poised to deliver a fresh round of financial assistance to individuals, families, schools and businesses hard hit by the coronavirus pandemic. Measures include $1,400 direct payments, an extension of supplemental unemployment benefits, an increase to the child tax credit and financial support for state and local governments, schools and public health efforts.

“When we took office 45 days ago, I promised the American people that help was on the way,” Biden said. “Today, I can say we’ve taken one more giant step forward in delivering on that promise.”

The Senate approved the package on Saturday afternoon, by a 50-49 party-line vote that did not include Republican Sen. Dan Sullivan of Alaska, who was absent for a family funeral. Its passage there followed more than 24 hours of debate, and was met with applause by Democratic lawmakers.

The House will need to approve the final version of the bill before it can head to Biden’s desk to be signed into law. It will meet to vote on an identical measure on Tuesday, House Majority Leader Steny Hoyer said Saturday.

“It obviously wasn’t easy, it wasn’t always pretty, but it was so desperately needed,” Biden said in his remarks.

Biden stressed the urgency, noting the approximately more than 500,000 American lives lost to COVID-19, hundreds of small businesses closed, millions of people out of work and families struggling to afford food and rent.

He said stimulus checks will get out the door “this month,” with more resources on the way for vaccine manufacturing and distribution as well as schools, local governments and unemployed individuals. Calling the plan “historic,” he also said it could potentially cut child poverty in half.

Biden acknowledged the effort and compromise needed to eke out Senate approval, and thanked a number of people including Vice President Harris, Senate Majority Leader Chuck Schumer and other Democrats. He also credited broad public support, saying, “your elected officials heard you.”

The measure passed with a simple majority using the budget reconciliation process and despite all present Senate Republicans voting against it.

Responding to a question on the lack of Republican backing, Biden reiterated that the support of the American people is “the key.”

“And that’s going to continue to seep down through the public including from our Republican friends,” he said. “There’s a lot of Republicans that came very close, they’ve got a lot of pressure on them and I still haven’t given up on getting their support.”

Biden also denied that progressives are frustrated with the series of compromises that led to the bill’s approval. Notably, House Democrats’ original version of the bill included a since-scrapped provision to raise the minimum wage to $15 an hour by 2025, while Senate Democrats agreed to lower the income cutoff for stimulus checks to meet the demands of moderate members of the party.

In a series of tweets on Saturday, Sen. Bernie Sanders called it “the most significant piece of legislation to benefit working families in the modern history of this country.”

Biden referenced Sanders’ statement in defending the bill’s compromises, which Biden said did not substantially affect its substance.

“I don’t think any of the compromises have in any way fundamentally altered the essence of what I put in the bill in the first place,” he said.

Republican Senate Minority Leader Mitch McConnell on Saturday accused Democrats of “exploit[ing] the crisis by jamming through unrelated liberal policies they couldn’t pass honestly.” Among other criticisms, he said it does not include not enough money for vaccinations and “ignores the science on reopening schools.”

Senate Democrats took to social media to hail the monumental legislation on Saturday.

“The American Rescue Plan is one of the most popular bills in decades for a reason,” wrote Schumer. “It’s one of the most significant anti-poverty bills in modern American history that will help millions and millions who are struggling just to get by.”

Sen. Raphael Warnock, one of two Georgia Democrats elected in a runoff election earlier this year, wrote that “this bold legislation was exactly what Georgians had in mind when they sent me to the Senate.” Many social media users are applauding Stacey Abrams, who is widely credited with helping turn the state blue.

Former President Barack Obama congratulated the Biden administration and the American people on the relief package, which he said represents “the kind of progress that’s possible when we elect leaders across government who are devoted to making people’s lives better—and a reminder of why it’s so important to vote.”