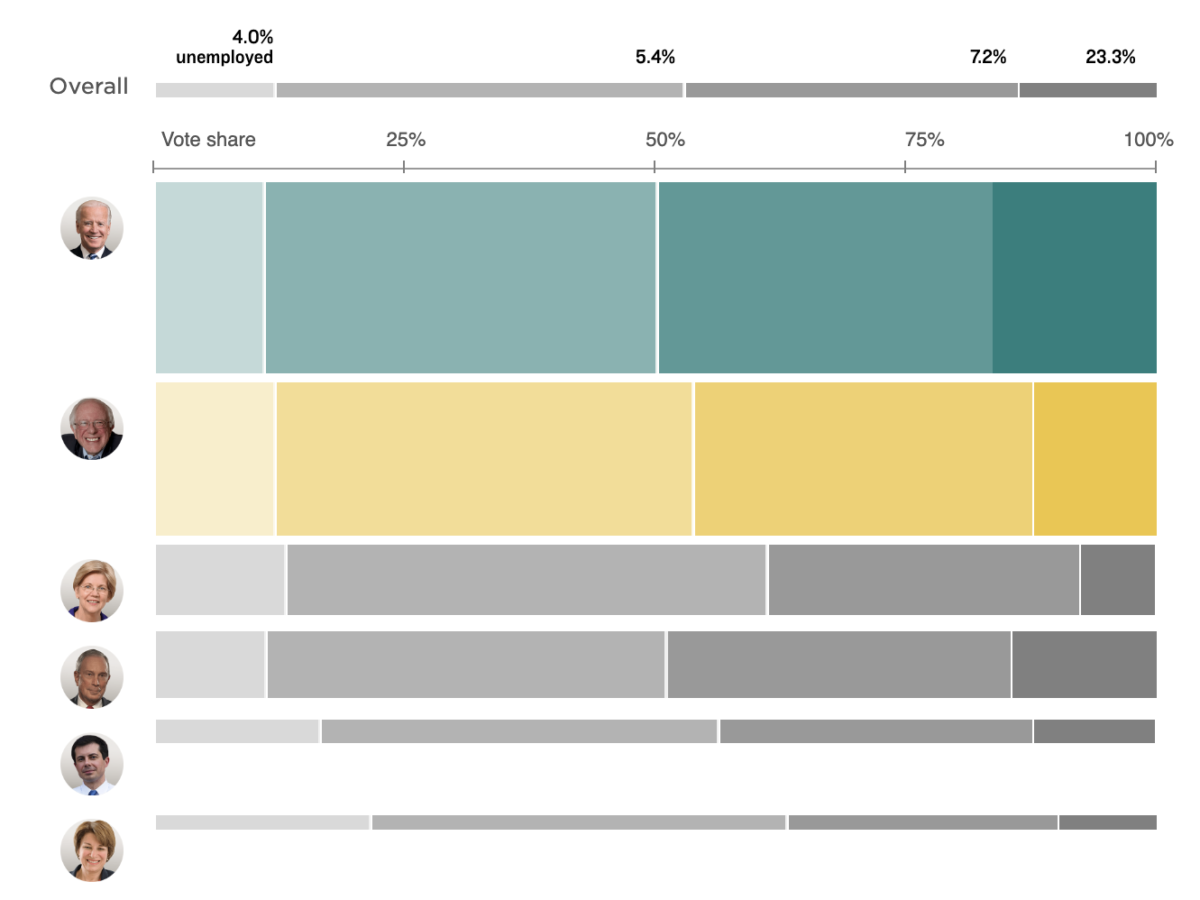 A month after the Iowa caucuses, Super Tuesday offered up the first look at how a diverse swath of the country could vote in the Democratic presidential primary race.

Now that more than 1,200 counties across 18 states have voted, a clearer picture is emerging of whom different segments of the Democratic voter base are backing.

It’s a contradiction that may also be a hurdle for Sanders: He’s running on a platform of free health insurance and free college, but the places he’s doing best have higher rates of people with bachelor’s degrees and health insurance coverage. Biden is doing better at the other end of the spectrum.

Measuring votes by county demographics has its limitations. There are, of course, wealthy people in poor counties, and there are people of color in predominantly white counties. A traditional way to try to solve this problem is with exit polling, which uses surveys to estimate the attitudes of subsets of voters. But exit polls are just that — estimates — while voting totals show the raw numbers of how voters split.

Neither former New York City Mayor Mike Bloomberg nor Sen. Elizabeth Warren came close to the front-runners in any of the demographic splits post-Super Tuesday. Bloomberg announced on Wednesday that he was suspending his campaign and joined fellow former candidates Pete Buttigieg and Amy Klobuchar in endorsing Biden. Warren suspended her campaign Thursday and has not endorsed any of the remaining candidates.

In the once-crowded Democratic primary field, Biden had staked his position in the race as being the candidate who would appeal most to black Americans. After his underwhelming performance in Iowa and New Hampshire, which are more than 90% white, the importance of that was clear. Post-Super Tuesday data show that in those counties that were most white, Sanders narrowly beat out Biden.

But the former vice president fared better in counties with higher percentages of nonwhite residents, beating Sanders in those counties. Sanders still held his own though — in part because of the large Latino vote in California, a state the senator won.

The differences were more drastic by education level. Nearly half of voters in counties with the lowest education levels choose Biden. He beat Sanders by 27 percentage points in those counties.

Counties with higher education levels cast the majority of votes through Super Tuesday because of their larger populations. And in these places it was much closer: Biden beat Sanders by just 4 percentage points.

Of all the county breakdowns analyzed, Biden had his strongest showing among residents of counties with low median household incomes (less than $42,200). He earned 50% of that vote, while Sanders earned less than half that.

All data are from Associated Press vote counts and the U.S. Census Bureau’s American Community Survey.