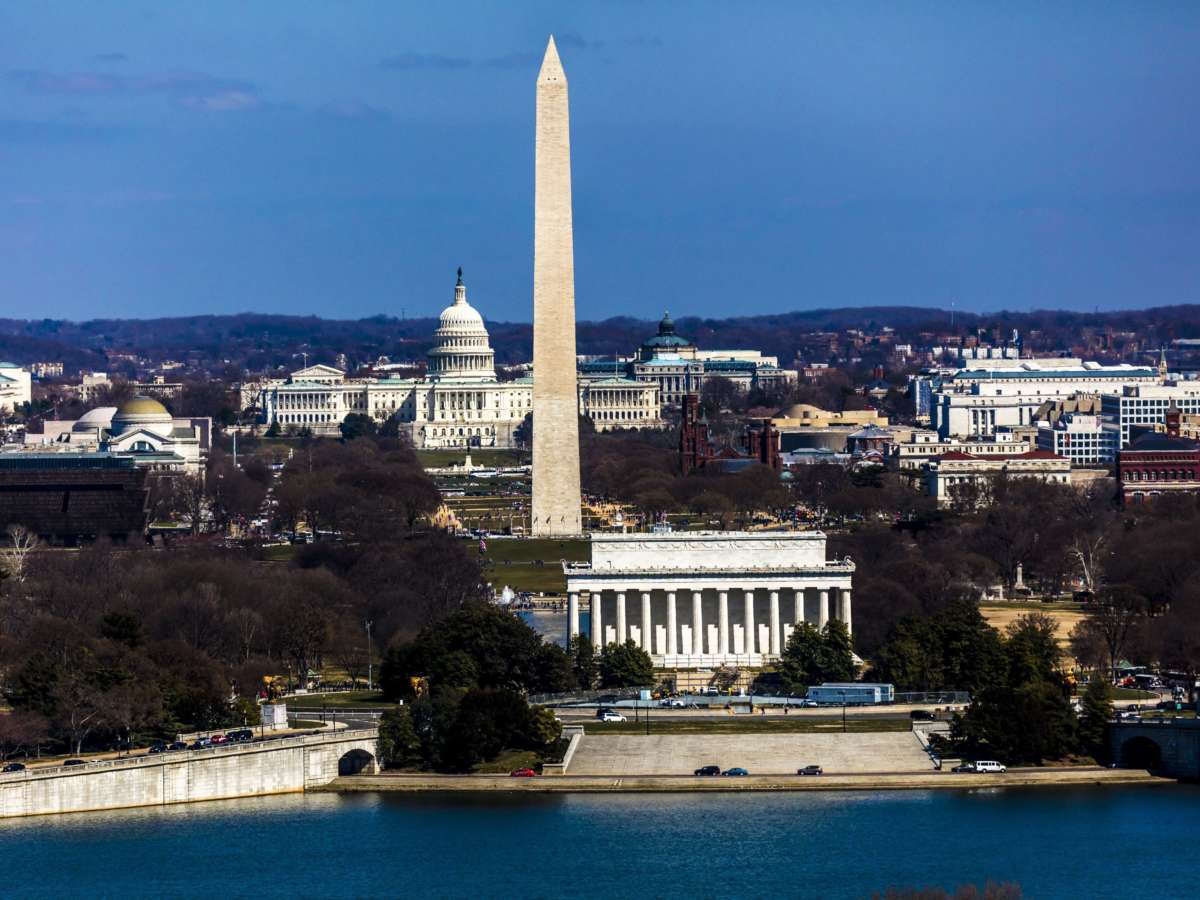 An aerial view of Washington, D.C., shows the Lincoln Memorial and Washington Monument as well as the U.S. Capitol.
Image credit: Joe Sohm

On Tuesday afternoon, President Biden announced his intention to appoint four new members to the U.S. Commission of Fine Arts, the body that oversees design and architecture of federal buildings in Washington, D.C. Their positions are appointed by the President, and do not need to be confirmed by the U.S. Senate.

The four intended appointees are meant to replace four commissioners who had been installed by President Trump, and who helped shape a controversial executive order intended to promote neoclassical architecture as the official style for federal buildings in Washington and at new federal courthouses elsewhere.

A White House official told NPR: “President Biden is proud to nominate this extremely qualified and well-respected group of professionals to the Commission on Fine Arts. They will bring to the commission a diversity of background and experience, as well as a range of aesthetic viewpoints.”

The four are Peter Cook, a principal at HGA Architects whose past projects include the Smithsonian Institution’s National Museum of African American History and Culture; Hazel Ruth Edwards, a professor and chair of Howard University’s Department of Architecture; Justin Garrett Moore, the inaugural program officer of the Humanities in Place program at the Andrew Mellon Foundation; and Billie Tsien, a partner at Todd Williams Billie Tsien Architects, whose firm designed the Barack Obama Presidential Center.

On Twitter in December 2020, Moore quoted a Bloomberg article that noted of Trump’s choices: “All seven members of the Commission on Fine Arts are now white men…. Trump’s fully staffed commission is the first to include only men since 1963 and the first all-white one in a decade.”

The current chair of the U.S. Commission of Fine Arts says he and three other commissioners were asked to resign or be fired by the Biden administration.

Justin Shubow, chair of the U.S. Commission of Fine Arts and a fierce advocate of classical architecture, provided NPR with a copy of a letter he received from Catherine M. Russell, director of the White House Office of Presidential Personnel, requesting his resignation. The letter, dated May 24, says, “Should we not receive your resignation, your position with the Commission will be terminated effective 6:00 pm tonight.”

Shubow, appointed to chair the commission by former President Donald Trump in 2018, declined the invitation.

The U.S. Commission of Fine Arts is an independent federal agency that advises the president, Congress and the Washington, D.C., government “on matters of design and aesthetics.” It reviews designs “proposed for memorials, coins, medals, and new or renovated government buildings.”

Shubow’s response to the White House’s request to resign says, “As chairman of the U.S. Commission of Fine Arts, I was shocked and dismayed to learn that three of my fellow commissioners, along with myself, have been asked to resign or be terminated by the President. In the Commission’s 110-year history, no commissioner has ever been removed by a President, let alone the commission’s chairman. Any such removal would set a terrible precedent.”

When Trump appointed Shubow and the other commissioners to elevate a neoclassical style, many architects howled. Robert Ivy, CEO of the American Institute of Architects, told NPR, “In the 21st century, we’re very different people from the people who popularized Greek Revival architecture in the 19th century, as beautiful as it was,” he says. “To try to force-fit new systems in old forms is, in of itself difficult to do, inefficient, and is not who we are today.”

President Biden revoked Trump’s executive order in February. Biden’s executive order also instructed the director of the Office of Management and Budget and any related departments and agencies to “promptly consider taking steps to rescind any orders, rules, regulations, guidelines, or policies, or portions thereof” that would’ve implemented Trump’s actions. Biden also called for the abolishment of any “personnel positions, committees, task forces, or other entities established” to fulfill Trump’s actions “as appropriate and consistent with applicable law.”

One of the three commissioners asked to resign, landscape architect Perry Guillot, says he was “disappointed” to receive the letter but accepts the decision that his position has been terminated. He was appointed to the commission by Trump and began his term in January. He says he does not believe the push for classical architecture was behind the request, telling NPR, “My work is not informed by classical ideals or part of that vocabulary.”

Guillot says he believes the request is more about “the math.” He points out that Biden will now get four new appointments to the U.S. Commission of Fine Arts, including chair. “I wish President Biden and the serving commissioners the best moving forward,” he says.

With additional reporting by Anastasia Tsioulcas.