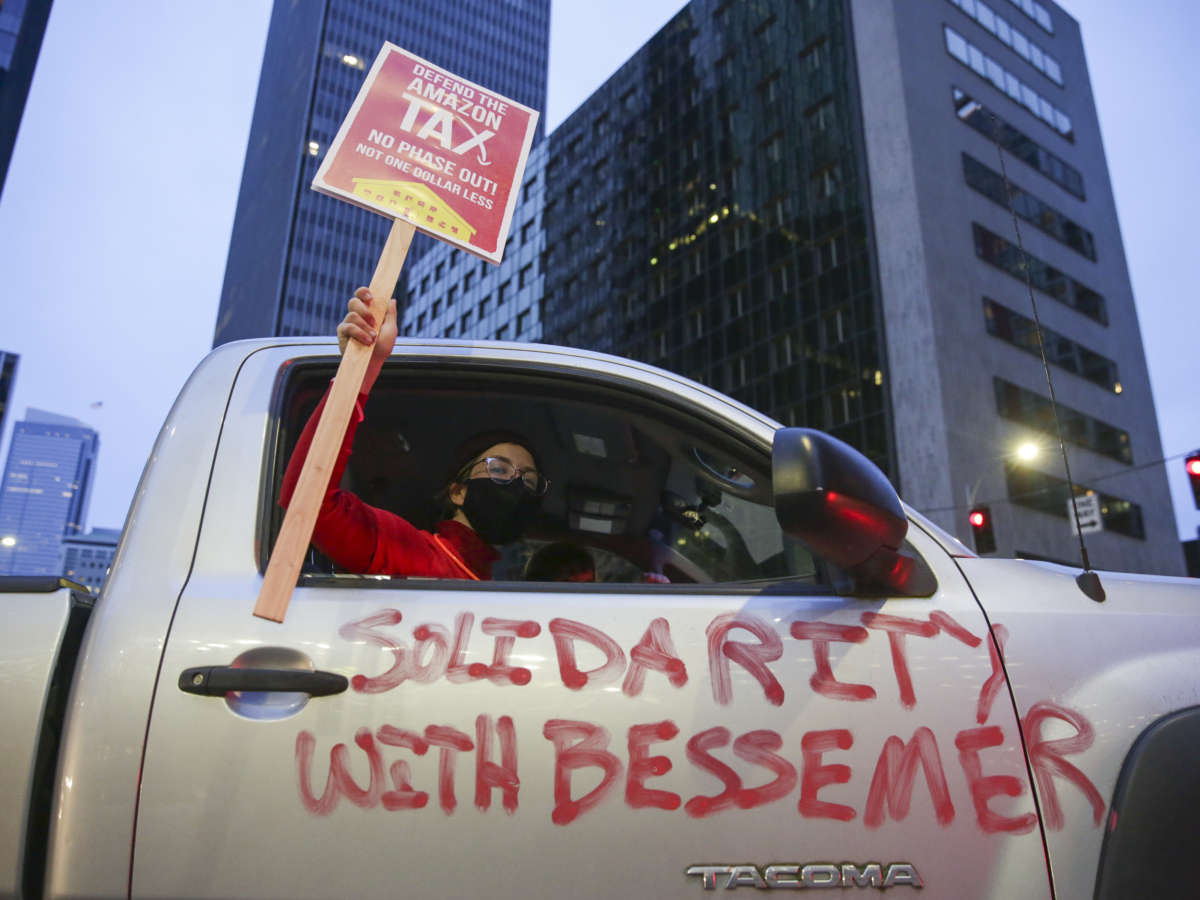 More than 5,800 warehouse workers at the Bessemer, Ala., Amazon facility are voting this month on whether to join the Retail, Wholesale and Department Store Union. Supporters are protesting in solidarity with those workers.
Image credit: Jason Redmond

Amazon warehouse workers in Alabama voting to unionize won the backing of an important executive.

Without naming the massive e-commerce company specifically, President Joe Biden said in a video posted late Sunday that he supports the organizing drive in Bessemer, Ala.

“Today and over the next few days and weeks, workers in Alabama and all across America are voting on whether to organize a union in their workplace,” Biden said in a video shared to his Twitter page. “This is vitally important — a vitally important choice, as America grapples with the deadly pandemic, the economic crisis and the reckoning on race — what it reveals is the deep disparities that still exist in our country.”

More than 5,800 warehouse workers at the facility are voting this month whether to join the Retail, Wholesale and Department Store Union.

The mail-in ballot election runs through March 29 and could be the first Amazon warehouse union in the U.S. If successful, it would also be a major victory for labor organizing in the South, a region difficult for union success.

Many Amazon warehouses in Europe operate under union contracts, but the company has fought efforts to unionize their American facilities. Amazon workers last voted whether to organize in 2014, when a group of technicians in Delaware voted down unionization.

Workers in Alabama – and all across America – are voting on whether to organize a union in their workplace. It’s a vitally important choice – one that should be made without intimidation or threats by employers.

Every worker should have a free and fair choice to join a union. pic.twitter.com/2lzbyyii1g

Jay Carney, Senior Vice President for Global Corporate Affairs at Amazon, did not respond to an email asking for comment. Previously, Carney was then-Vice President’s Biden’s director of communications. He went on to serve as President Obama’s press secretary.

Biden warned in his video that there should be “no intimidation, no coercion, no threats, no anti-union propaganda” during union elections. He said, “It’s not up to an employer” to decide any union election.

During the 2020 election, Biden campaigned on a promise to stand by labor and made strong employment policy a major piece to his agenda.

He said in his video that he’s “keeping that promise.”

Biden has also backed Democrats’ plans for labor law reform in the far-reaching Protecting the Right to Organize Act, or the PRO Act. The proposal, which passed the House last year and which Democratic lawmakers hope to pursue again this year, would amend the country’s decades-old labor laws to give workers more power to organize and to penalize companies who retaliate against those efforts, among several other significant changes.

Biden’s support of the organizing drive is in stark contrast to his predecessor, former President Trump. Trump aligned himself with businesses and employers and strongly opposed Democratic labor policies, including the PRO Act.

Stuart Appelbaum, president of the RWDSU, thanked Biden for his support of the organizing drive.

He said in statement, “As President Biden points out, the best way for working people to protect themselves and their families is by organizing into unions. And that is why so many working women and men are fighting for a union at the Amazon facility in Bessemer, Alabama.”

Appelbaum told NPR in January that the Bessemer warehouse workers wanted to join a union over concerns with grueling productivity quotas and wanted more input on workplace policies.