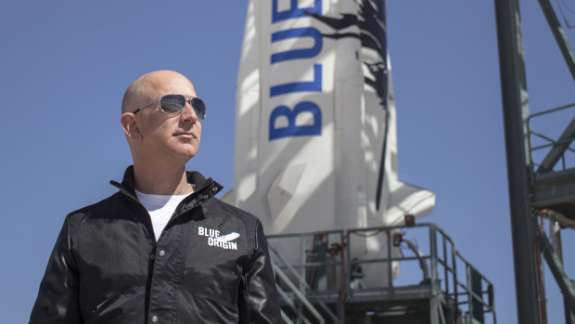 According to SEC filings, Bezos sold about $941 million of stock this week, about 1 million shares. At a space symposium last month, Bezos said he would sell about $1 billion of Amazon stock a year to invest in his rocket company, Blue Origin.

Along with Amazon, Bezos started Blue Origin in 2000 with the premise of giving tourists rides to the edge of space. The company is now testing its New Shepard rocket that will do just that, launching paying customers on a suborbital flight. Blue Origin promises views of the Earth from space and a few moments of micro-gravity.

Blue Origin is making strides with the spacecraft at a testing sight in west Texas. The New Shepard booster is a reusable rocket that can land after liftoff.

The private space company is also developing a rocket that can launch payloads into orbit. The company is building a rocket manufacturing plant just south of Kennedy Space Center and will launch from Cape Canaveral. The cost of development of the orbital rocket, called the New Glenn, is estimated at $2.5 billion, according to Bezos.

Blue Origin also manufactures rocket engines. Private space company United Launch Alliance is interested in using Blue Origin developed engines for its next generation commercial launch vehicle. The BE-4 engine is being developed at a facility in Kent, Washington and tested in West Texas.