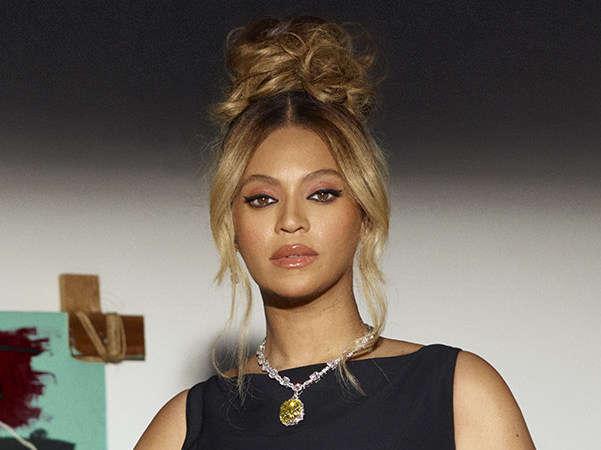 Beyoncé and Jay-Z, who have been married for over a decade, are the face of a new Tiffany & Co. campaign called "ABOUT LOVE."
Image credit: Mason Poole

Singer Beyoncé and her rapper husband Jay-Z are once again turning heads. And this time, they’re making history, too.

Photos from the “ABOUT LOVE” campaign — including several shared on Beyoncé’s Instagram — are drawing admiration across social media, both for the stunning images and the historic firsts they represent.

Beyoncé can be seen wearing a large yellow diamond necklace in the photos. That’s the iconic 128-carat Tiffany Diamond, which the company acquired in 1878 and rarely puts on display (Audrey Hepburn famously wore it in publicity photos for Breakfast at Tiffany’s, and Lady Gaga wore it to the 2019 Academy Awards).

Beyoncé is only the fourth woman, and first Black woman, to wear the diamond in more than a century.

That’s not the only milestone. Some of the photos show the couple posed in front of a large, turquoise painting — Jean-Michel Basquiat’s Equals Pi. The 1982 work came from a private collection and has never been seen before in public, according to Tiffany.

This is also a personal first for the Carters. It’s the first campaign they’ve appeared in together, and Tiffany describes it as “an exploration of connection and vulnerability.” Beyoncé and Jay-Z, who got married in 2008, have a well-documented history of ups and downs, which NPR Music’s Rodney Carmichael walks us through here.

“Ushering in a new brand identity, this campaign embodies the beauty of love through time and all its diverse facets, forging a new vision of love today,” the company said.

Tiffany & Co. is also pledging $2 million toward scholarship and internship programs for historically Black colleges and universities, with more details on the initiative to come.

(Fans will remember that Beyoncé invoked an HBCU theme when she headlined Coachella in 2018 and awarded scholarships to students at four HBCUs that same year.)

And of course, there will be music. The company says it will release a film by director Emmanuel Adjei — who was also involved with Beyoncé’s 2020 visual album Black Is King — that includes a rendition of “Moon River” “reimagined with vocals by Beyoncé.” That song was written for Hepburn to perform in Breakfast at Tiffany’s.