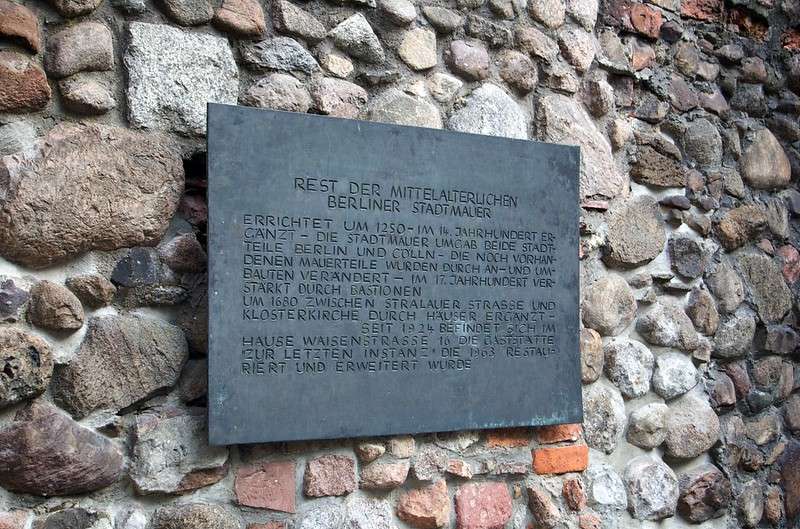 Thirty years ago, Germans began celebrating the fall of the Berlin Wall, ending a Cold War era of separation between East and West, democracy and communism.

At a time when U.S. culture is increasingly divided along partisan lines, students and professors at New College of Florida decided to build a Berlin Wall again, as a way of studying the history of divisions and how they persist today.

Since it went up in September, every Wednesday at lunchtime has been open graffiti hour at the wall.

A student named Kaelan Dean is spray painting the words “Act Up,” which were on the original wall.

“The idea is that they put up the wall blank, students can come in and add their graffiti similar to the Berlin Wall and then in early November we are going to have a get-together and tear it down,” Dean said.

The East Germans built it in 1961 as a way of preventing people from defecting. The wall isolated West Berlin, an enclave of democracy, deep inside Soviet territory.

The idea to re-create the Berlin Wall for students came from visiting assistant professor of German, Lauren Hansen.

“Since it’s something that happened before their own lifetime, I try to drive home the fact that it wasn’t that long ago at all, that we had the Berlin Wall standing and when it fell,” Hansen said.

She says the story of the wall is as relevant as ever.

The history is brought to life, by students like Jay Stewart.

One day in late September he stood before the wall and re-enacted John F. Kennedy’s famous speech from 1963, when Kennedy expressed America’s solidarity with the people of Berlin.

In it, Kennedy said: “All free men, wherever they may live are citizens of Berlin and therefore as a free man I take pride in the words, ‘Ich bin Ein Berliner’.”

After the re-enactment, Stewart reflected on the meaning of Kennedy’s speech.

The other side of the wall, the East German side, is painted a stark gray, like it was at the time. Several black and white photos hang on it, of real people who died trying to cross to the West.

“I had each of my students choose a victim of the wall that’s available on an online archive. So they chose one of the victims and printed out a picture of them. And then I had them hand write on the back the name, the age, when they died, how they died, and any other interesting information.”

“Democracy, now or never,” were the words East German author Christa Wolf spoke in 1989, days before the wall came down. Wolf was a major literary figure at the time.

Student Emma Sunderman practices for a re-enactment of Wolf’s speech. She watches a video of it, then recites it to herself in English.

In translation: “Major social movements are growing. People in our country have never before spoken so much as in the last few weeks. Never before really spoken with each other with such passion, such anger and sadness, but also with such hope.”

Sunderman’s words reflect a nation emerging from totalitarianism, grappling with freedom and dialogue.

Sunderman is 20, and says she knew nothing about the Berlin Wall at the start of this year. She says studying it opened her eyes to the power — and the fragile nature — of democracy.

“It’s very important for people to vote and speak up for what they believe in, especially because in terms of radical ideas, there are so many today,” Sunderman said.

Seeing students interact with the replica at New College brings adjunct professor of German, Frank Chaich, back to when he was an exchange student in Berlin decades ago, and saw East German guards at a major train station, aiming their weapons at him.

“It was a stunning revelation to realize that this is what other people in other places of the world were enduring,” Chaich said. “And it impacts me even today. I’ll never forget those soldiers with their machine guns pointed at us, on the platform back in 1974.”

Opalsky says the project has made him and his fellow students think about how walls are damaging to people on both sides.

“I think it draws a lot of attention to borders and walls because they’re confronted with it every day now,” Opalsky said. “It’s not like something that’s far off and they just hear about it like, ‘Oh, that’s bad’. There’s physically a wall, blocking them from getting to class. They have to go around it, it’s in their face every day.”

And what’s on his mind, is history repeating itself.

“If people don’t get out there and do things to stop it from happening (it) will most definitely happen again, it’s already happening,” Opalsky said. “It’s in like, in the baby stages of happening.”

Opalsky looks forward to grabbing a sledgehammer, and joining other students as they knock their wall down on November 8th, the day before the 30th anniversary of the real Berlin Wall’s fall.