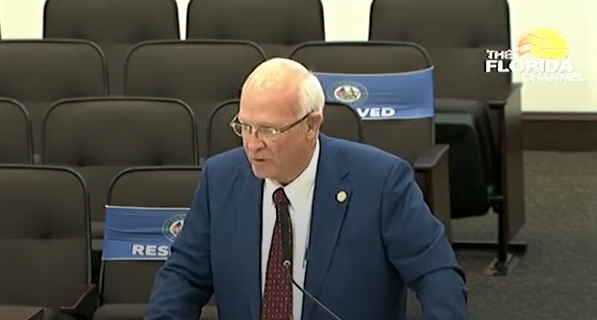 Sen. Dennis Baxley says he wants students to have a well-rounded education but also a viable career plan. Image: Florida Channel via video

But he is trying to get rid of a promise to fund 100 percent of tuition and fees for top high school grads and 75 percent for others in the merit-based program.

The Ocala Republican has received a lot of feedback on SB 86.

So now, instead of denying hard-earned scholarships, it creates a list showing students the economic viability of different college programs.

“If you’re graduating from college and you’re un-hirable, that’s not a very bright future,” he said Tuesday during a meeting of the Senate Appropriations Subcommittee on Education.

Democrats say parents are counting on the state’s promise to pay 100 or 75 percent.

Baxley says his bill does not cut funding but the promise is a false one that future Legislatures could change.