Baseball Is Back, So Grab Your Hot Dog And A Beer. Just Keep A Safe Distance 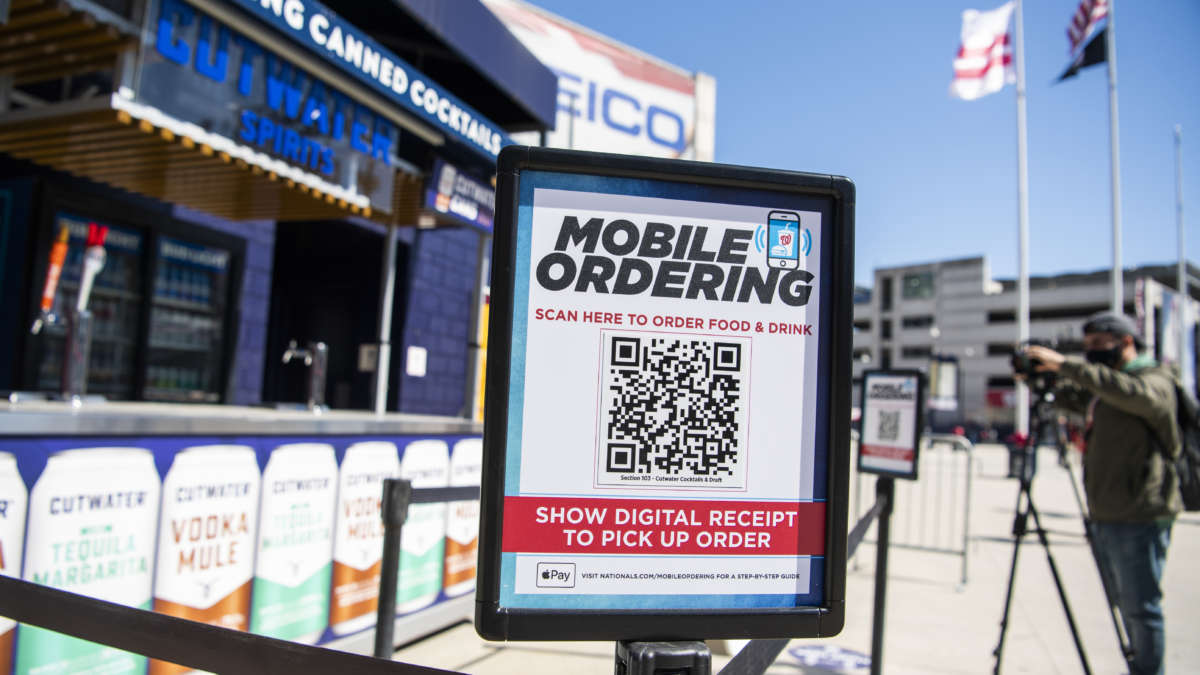 A mobile ordering sign is seen on March 30 at a vending station in Nationals Park, home of the Washington Nationals. The Nats, along with many other teams in baseball, are implementing new safety protocols, including for ordering food, as a new season kicks off on Thursday.
Image credit: Tom Williams

And as a new baseball season kicks off, all those ballpark staples will still be available. How that food gets to you, however, will be a different matter.

With the Major League Baseball season starting off with much reduced capacity at most ballparks and with social distancing rules, teams have had to think hard about how to interact with their fans.

Attendance limits have been put in place by all teams except for the Texas Rangers, with most at or below 50% capacity.

“Things are going to be definitely different,” says Jonathan Stahl, vice president of experience and hospitality for the Washington Nationals.

(In fact, the Nationals had to postpone its Opening Day game against the New York Mets after one player tested positive for the coronavirus, according to a report on Thursday in The Washington Post).

Some of these changes are likely to be welcomed by fans. Standing in long lines at concession stands, for example.

That’s because fans will be encouraged to use mobile apps to order concessions that they can go pick up at set locations. At some ballparks, fans will even be able to have the food or drink delivered to them at their seats, given that limited capacity and social distancing makes it easier to walk through the rows.

But other changes will likely be missed.

Aramark, which provides food and beverage service for nine MLB teams, will eliminate self-serve soda fountains and condiment trays at its venues.

Ballparks are also going cashless, which means fans will no longer pass a $20 bill down the aisle to pay a vendor and get their hot dog handed down the row in return.

And that other cherished tradition of having vendors walk up and down the aisle yelling “Ice, cold beer!”? Well, depending on the ballpark, it could be a practice that will be banned.

For vendors themselves, all the changes also mean a moment of trepidation.

Vince Pesha, for example, fondly remembers his first day as a peanut vendor at Chicago’s Wrigley Field in 1969. He says many of the vendors love the interactions with the fans.

And then there are the tips.

Pesha would know. He himself started out selling peanuts.

“I was happy. I made $40, which in my opinion was a lot of money at the time,” Pesha recalls about his first day at Wrigley.

Now, after 25 years as a vendor, Pesha has hung up his tray and represents some of his former co-workers as a union official.

He says many are concerned about contracting COVID-19.

“Older vendors are a little apprehensive about coming in,” Pesha says. “They’re a little worried about it. So they’re using their seniority and saying, ‘I’m going to wait and see what happens.'”

But others welcome the chance of being back to the ballpark after being laid off last year.

Deedee Reed, for example, has worked at Dodger Stadium in Los Angeles since 1991 where she started at 18 as a cashier.

Over the years, she’s held various positions, most recently as the manager of one of the stadium’s outdoor bars.

Last year, Reed and some 40,000 other stadium workers across the country found themselves without a job.

“Oh yeah, I’m going back,” she says, though she admits: “I don’t know what to expect when I get back.”

For baseball teams, it all means a fine balancing act.

After going an entire season without fans, teams are keen to have them back.

For baseball teams, ballpark-related sales such as tickets, concessions and parking account for about 40% of total revenues.

Stahl at the Nationals is pleading for patience, noting most measures are, for now, intended as temporary in the hopes of gradually opening up ballparks to more fans.

“Hopefully by the summer or the fall will be as close back to normal as possible,” Stahl said.

And just maybe, going back to normal could mean a packed stadium, and putting your arms around a complete stranger during the seventh-inning stretch, and back to the traditional baseball experience fans have grown to love.