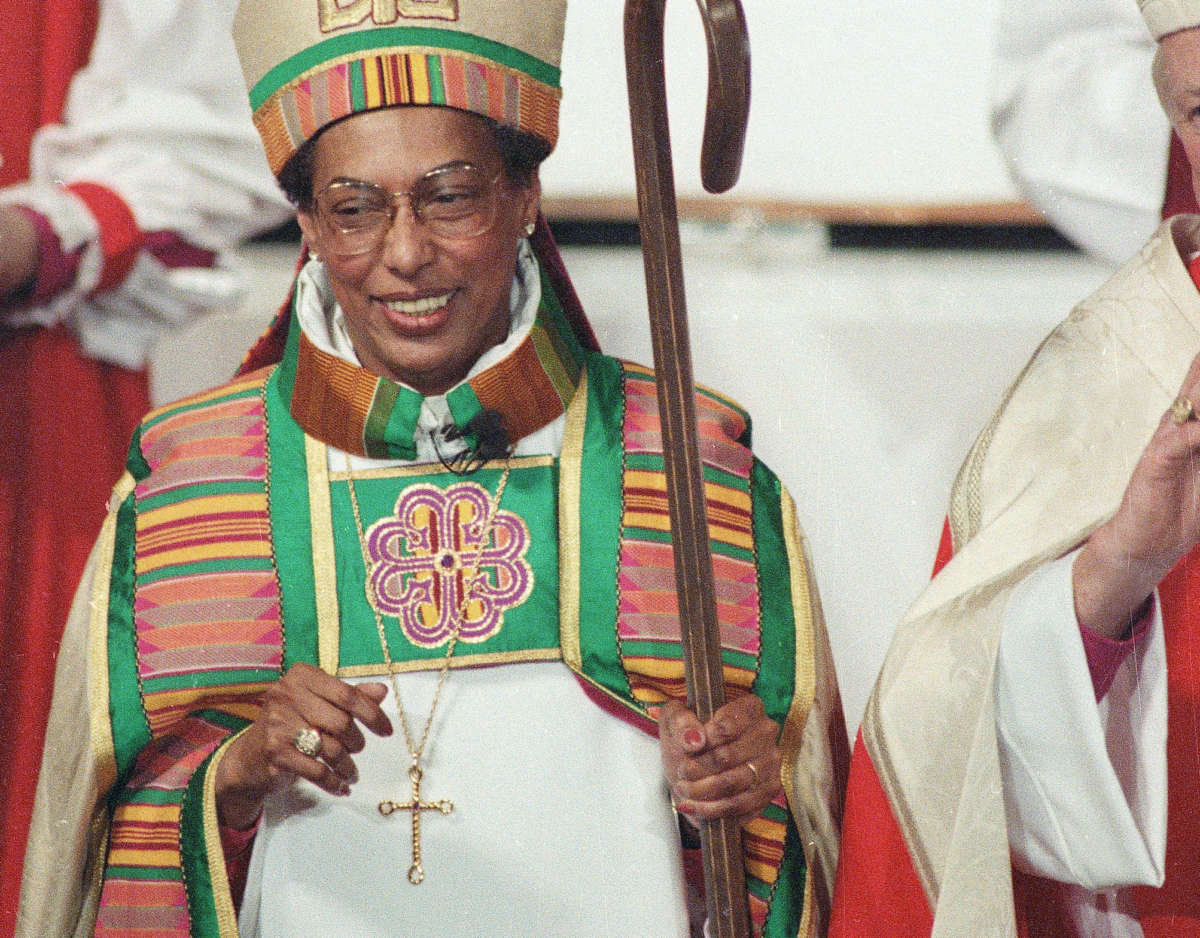 Bishop Barbara Harris smiles at the congregation after her ordination as the first woman bishop in the history of the Episcopal Church at the Hynes Convention Center in Boston on Feb. 11, 1989. Harris died Friday at age 89.
Image credit: Peter Southwick

Barbara C. Harris, the first woman to be ordained a bishop in the Episcopal Church and the worldwide Anglican Communion, died Friday in Massachusetts. She was 89.

She was elected as a suffragan, or assistant, bishop in September 1988. On Feb. 11, 1989, Harris was consecrated as a bishop in the Episcopal Diocese of Massachusetts.

Her rise to bishop broke centuries of precedent for tens of millions of Christians in the Anglican Communion, which has members in more than 165 countries.

Standing at only about 5 feet, she was “a giant in a tiny package,” said Gene Robinson, a friend and colleague. “She did more to convince girls and women that they could do anything they set their mind to, she affected the lives of so many people she never met.”

Harris was born on June 12, 1930. She grew up in Philadelphia, where the Episcopal Church was a part of her family’s life. She was active in the civil rights movement in the 1960s, according to the Episcopal Diocese of Massachusetts, traveling to register black voters in Mississippi and taking part in the march from Selma, Ala. to Montgomery, Ala. in 1965.

She came to her prominent place in the church late in life, after spending decades in public relations, working for both the black-owned Joseph V. Baker Associates PR firm and later for the oil firm Sun Company.

Harris was ordained as a deacon in 1979 and the next year as priest at age 50 in the Diocese of Pennsylvania.

When she was elevated to the position of bishop in 1989, becoming not only the first woman but the first African American woman, it was “a huge step,” Robinson said. “The ground moves when you do something like that.”

Harris faced vitriol in taking on the new role. Robinson recalled an incident when Harris showed him bunches of hate mail she received when she was elected bishop.

Robinson, who himself made history in 2003 as the first openly gay bishop in the Episcopal Church, said Harris “was always joyful.”

“That was the source of her overcoming all of the nastiness that came her way.”

Harris was known as a gifted storyteller who spoke out against racism, sexism and homophobia during her time in the church.

“God has no favorites,” she said in a 2009 sermon, the Massachusetts diocese recounted. “So to you, gay man, lesbian woman; you, bisexual person; you, transgender man or woman; you, straight person; all of us, the baptized: Let us honor the sacrament of our baptism and our baptismal covenant, the only covenant we need to remain faithful.”

Harris served for 13 years as the suffragan bishop in Massachusetts until she retired in 2002. From 2003 to 2007, she was an assisting bishop in the Diocese of Washington in Washington, D.C. She continued to volunteer and preach in Boston after retirement, and made time to co-author a 2018 memoir, Hallelujah, Anyhow!

In announcing Harris’ death, the Rt. Rev. Alan M. Gates of the Diocese of Massachusetts said that members’ “hearts are truly heavy at the loss of one who has been a faithful and altogether irrepressible companion, pastor and inspiration to us in the Diocese of Massachusetts for 31 years. At the same time our hearts are truly buoyed by the hope which she preached and the conviction she embodied for us throughout all these years.”