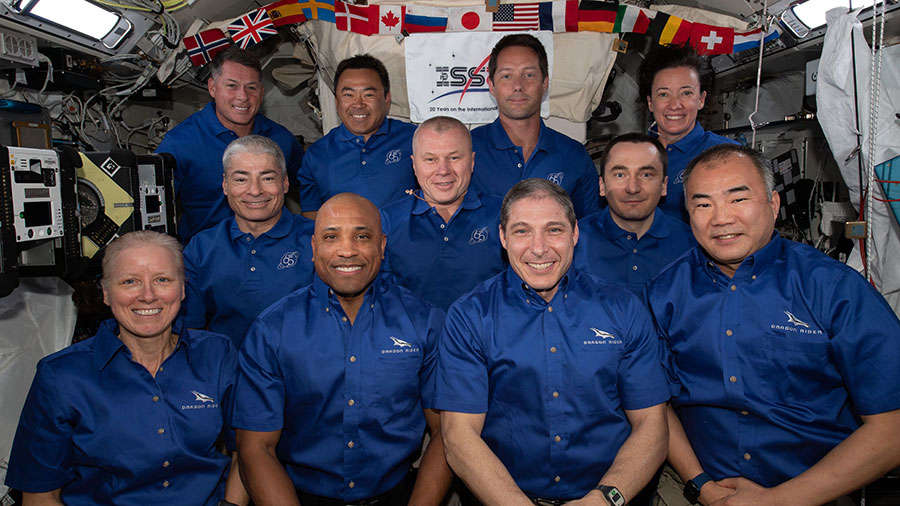 The 11-member crew aboard the station is actually a combination of three different crews. The four Space Crew-2 astronauts are in the back row. The three-person crew of the Soyuz MS-18 crew ship is in the middle row. In the front row, is the SpaceX Crew-1 foursome. Photo: NASA

After weather delayed two previous attempts, NASA astronauts are returning to Earth Sunday off the coast of Florida. NASA said it will be the first night splashdown of a U.S. crewed spacecraft since Apollo 8’s predawn return in the Pacific Ocean Dec 27, 1968.

NASA astronauts Mike Hopkins, Victor Glover and Shannon Walker, along with JAXA astronaut Soichi Noguchi spent the past six months on the station after launching from Kennedy Space Center in November.

The Crew-1 astronauts will return to Earth in the same SpaceX Crew Dragon capsule that brought them to the station, splashing down in the waters off the coast of Florida.

The crew is set to undock from the station Saturday at 8:35 p.m. EST with a planned splashdown Sunday at 2:57 a.m. SpaceX and NASA waived off earleir planned return trips Wednesday and Saturday due to bad weather in the splashdown zone.

The Crew-1 capsule has seven possible splashdown locations off the Florida peninsula. NASA and SpaceX select two of these locations as primary targets about two weeks before the return, with decision making on the final zone occurring before the Crew Dragon performs a deorbit burn.

They’re the the first operational crew sent to the station on SpaceX’s capsule under NASA’s Commercial Crew program, a $6 billion effort to launch astronauts from the U.S. using two private companies: SpaceX and Boeing.

During the crew transition period, the space station had 11 people on board — the most since the end of the Space Shuttle era which prompted NASA to get creative when it comes to sleeping arrangements.

Crew-1 is the first of six operational missions currently contracted by NASA. A mission last May that sent NASA’s Doug Hurley and Bob Behnken to the station was a test mission for the program. Crew-3 is currenly scheduled to launch in October.