Back To School Order Raises Concerns 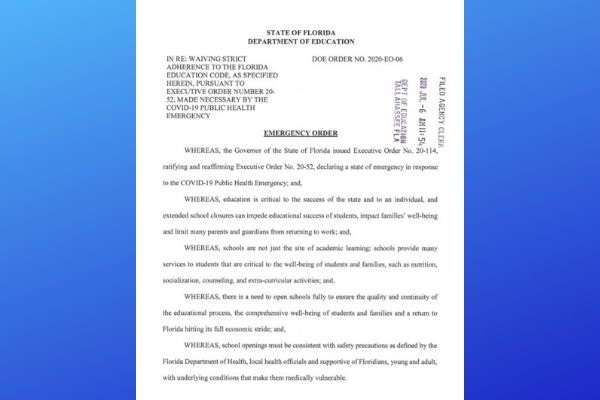 This week Florida’s education commissioner Richard Corcoran released an executive order telling schools that they will have to open up brick and mortar campuses five days a week in fall.

School districts are now trying to figure out how to reopen schools safely- as the coronavirus pandemic continues to surge statewide. Teachers are worried about the health of their students and themselves once campuses reopen.

“We are shocked and saddened to think that the governor and the commissioner feel that they can control and dictate what is done within Volusia County Schools,” said Albert.

She said it’s the school board’s job to make decisions for teachers and students in Volusia County.

“So we feel that it is an extreme…example rather of overreach on the part of the governor and the commissioner.”

Albert said a plan for how Volusia County schools will return to class is set to be released on July 15th.

“We’ve surveyed our members and we have some members who are ready to go back brick and mortar; we have other members that are highly concerned about returning to schools based what they’re seeing in our state and in our communities about the rise in cases of COVID,” said Albert.

“So we we are just hoping that whatever plan is presented affords a variety of options, not only for the educational professionals, but for parents as well.”