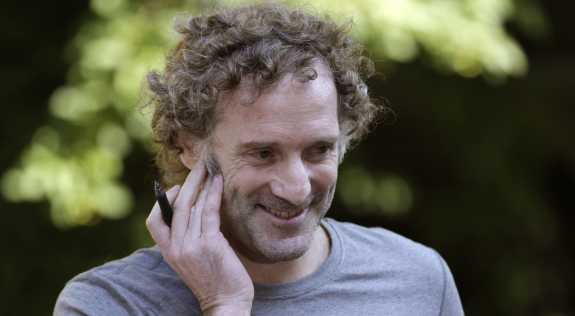 Peter Theo Curtis smiles as he talks with reporters outside his mother's home in Cambridge, Mass., on Wednesday.
Image credit: Charles Krupa

American journalist Peter Theo Curtis was back home in Cambridge, Mass., today, after he was freed by a militant group in Syria.

Speaking to reporters, Curtis said he was “overwhelmed by emotion.” Curtis, if you remember, was freed by Jabhat al-Nusra, the al-Qaida affiliate operating in Syria, over the weekend.

Curtis was handed over to United Nations peace keepers just a week after another extremist group, Islamic State, also known as ISIS or ISIL, beheaded the American journalist James Foley.

Curtis said that he had no idea the kind of effort that was underway to get him back home. He said that total strangers had come up to him and told him they were glad he was home.

“I suddenly remember how good the American people are and what kindness they have in their hearts. And to all those people I say a huge thank you from the bottom of my heart,” he said.

Curtis did not take any questions. He said he would at another time, but now it was time to bond with his mother and his family.

Meanwhile, the mother of freelance journalist Steven Sotloff, who is still being held captive in Syria, issued a direct plea to the Islamic State.

In the video, she says that Sotloff is simply an “innocent journalist” without control of the actions taken by the United States.

“I ask you to please release my child,” Shirley Sotloff says.

Sotloff pleads with ISIS leader Abu Bakr al-Baghdadi to grant her son amnesty, “to use your authority to spare his life and to follow the example set by the Prophet Mohammed who protected people of the Book.”