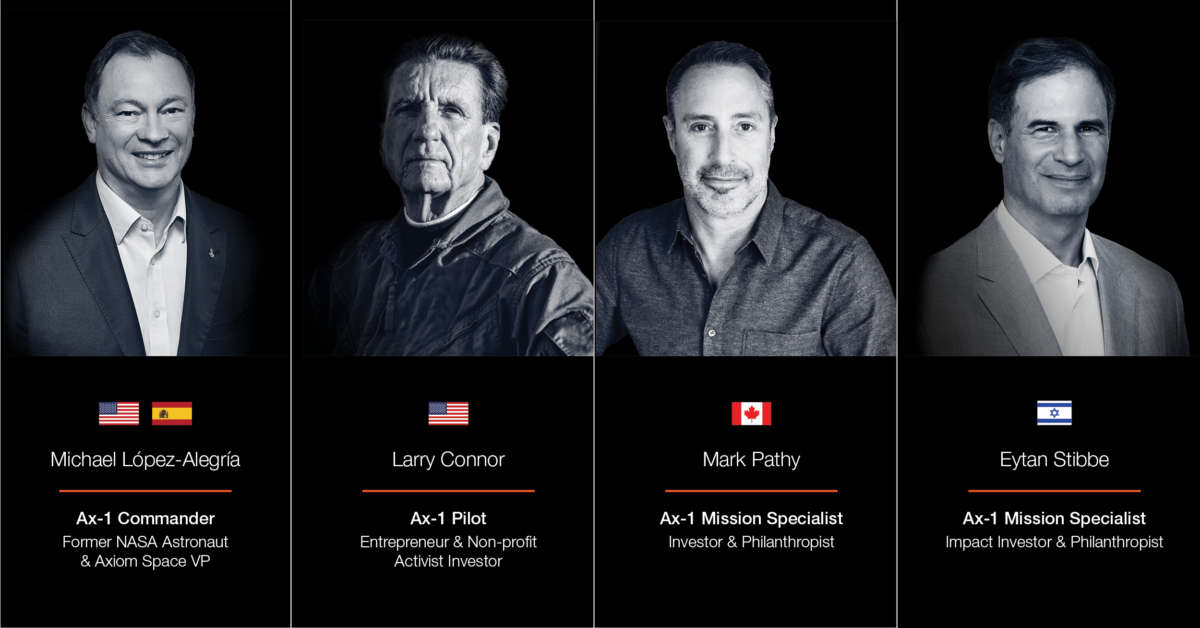 A commercial space company announced the first group of private astronauts slated to visit the International Space Station. The crew could launch from Kennedy Space Center as early as January 2022.

Axiom Space said three private individuals and a former NASA astronaut will fly aboard SpaceX’s Crew Dragon capsule for an eight-day stay on the station.

The three other crew members flying on the Ax-1 mission — an American, Canadian and an Israeli — are all investors and philanthropists who paid the $55 million each for the ride.

Along with commander López-Alegría, Larry Conner will serve as the Ax-1 pilot. Canadian Mark Pathy and Israeli Eytan Stibbe will serve as Ax-1 mission specialists.

“This is just the first of several Axiom Space crews whose private missions to the International Space Station will truly inaugurate an expansive future for humans in space ­– and make a meaningful difference in the world when they return home,” said Axiom Space president & CEO Michael Suffredini.

SpaceX’s Crew Dragon capsule already transports NASA astronauts to the International Space Station through a partnership called Commercial Crew. The most recent mission launched three NASA astronauts and a JAXA astroanut from Kennedy Space Center back in November, with the crew remaining on the station for a six-month mission before splashing down off Florida’s coast.

The Ax-1 mission comes as NASA relaxed its guidelines for commercial uses of the International Space Station. Axiom said the group will conduct some science and philanthropic activities while on board the station.

The launch will serve a a “precursor” private astronaut mission and is subject to NASA and other ISS approval before the 2022 launch. The company said it’s finalizing that approval ahead of the launch opportunity with SpaceX.

While Axiom is sending the first group of space tourists to the station, it’s not the first time the ISS hosted private visitors. A Canadian flew to the station on Russia’s Soyuz capsule for a private 11-day stay on the station back in 2009.