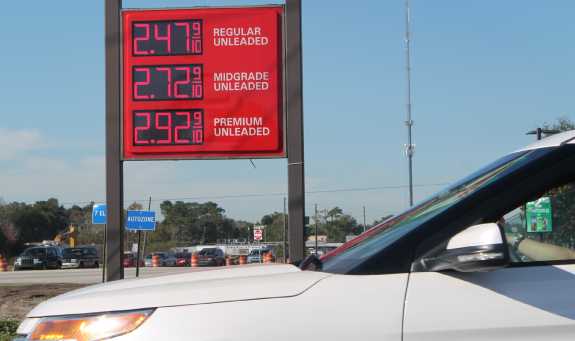 Gas prices in Orlando have fallen in the past seven days. According to Gasbuddy.com, a national gas price tracking site, Orlando drivers are paying just under $2.60 per gallon for regular gas. That’s 8 cents less than last week’s pump prices.

Bob Yokes is keeping his tank full just in case the price goes up again. He’s also spending more time on the road because he can afford it.

“I went on a little bit of a drive this weekend just for pleasure, and I wouldn’t have done that has gas been three or four dollars a gallon.”

Yokes is thinking about driving up to Michigan to see his family for the holidays.

“When gas prices are high, I typically fly. I wouldn’t mind some interstate travel based on good gas prices instead of flying. Just a casual drive kind of vacation,” he says.

“People are buying more gas now because the price is less and they can afford more. It’s more business for me, more money for me, so hopefully I think it’s good for the overall economy for the whole country. Hopefully it will go down more.”

The average price of gas in Orlando is $2.56 per gallon, which is one cent less than the national average.