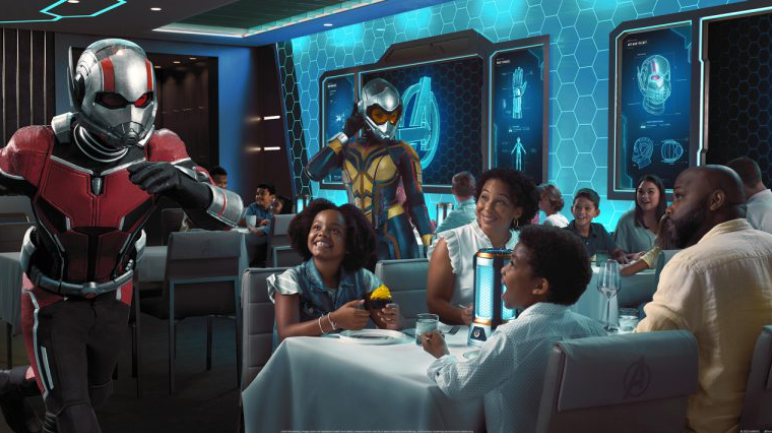 Disney has announced more details about its “Avengers: Quantum Core” dining experience on its latest cruise ship, the Disney Wish.

Just announced! ‘Avengers: Quantum Encounter’ will debut aboard @DisneyCruise Line’s newest ship, the #DisneyWish. Take a special look at how this ambitious dining adventure will come to life in summer of 2022: https://t.co/4VHkWou2CS pic.twitter.com/4OpcJfcEWV

The “cinematic dining adventure” will be spearheaded by Ant-Man and the Wasp who will introduce diners to some of the latest Avengers technologies.

The technology will be displayed as holographic models and scenes from the movies that get projected on screens around the room.

Every table will feature its own Quantum Core which will allow families to virtually shrink objects with Ant-Man and Wasp as they battle an unexpected villain.

Once enough Quantum Cores successfully complete their mission, the entire dining room will light up with energy pulses.

“The Worlds of Marvel” restaurant will feature cuisine from Wakanda, Sokovia and New York City, home to the Avengers.

The Disney Wish will set sail on her maiden voyage the summer of 2022.