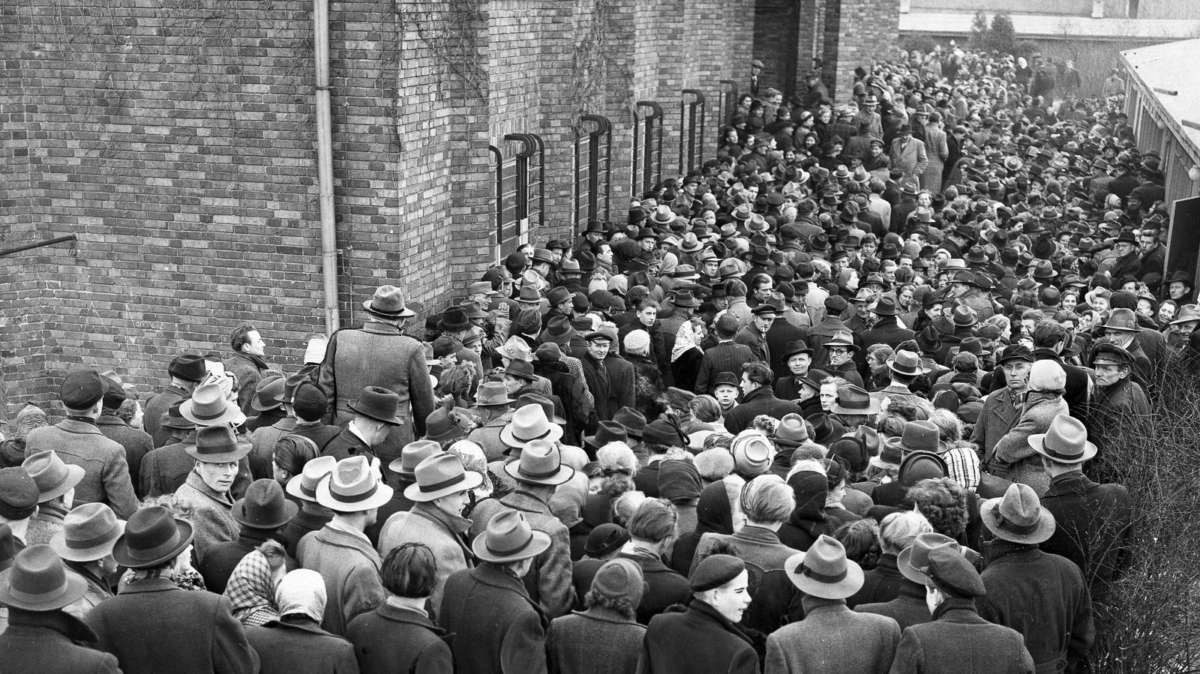 When Allied troops entered Germany at the end of World War II, they were astounded to learn that more than 6 million people had been stranded in the fallen Reich after the war.

Among the displaced persons were Allied prisoners of war, Jewish survivors of concentration camps and forced laborers from conquered lands who had been brought in by the Nazis to fuel the German war effort. With a few months, most of them were able to return to their homelands, but about a million people refused to go home — or had no home to return to.

Nasaw writes about the remaining group in his new book, The Last Million. He notes that the six-year effort to house displaced persons in camps and eventually find them new countries to settle in proved a torturous and politically charged journey at a time when most of the world wanted to forget about the war and rebuild their own lives.

“From 1947 on, the nations of the world began to accept for resettlement displaced persons — Latvians, Estonians, Poles, Yugoslavs — but they would not welcome the Jews,” he says. “Until America opened its doors to Jewish displaced persons, no nation on Earth was willing to do so.”

But U.S. acceptance of displaced persons — and especially Jews — was severely restricted. And Nasaw says that the post-War resettlement effort set a pattern for the 21st century refugee crisis.

They were three major routes into Germany during the war: The earliest [in] were the forced laborers, the slave laborers, the guest laborers. Germany could not afford to carry on business without millions of what Hitler would call “subhuman workers.” With millions and millions of soldiers at first on the eastern front, someone was needed to tend the fields to work in the factories and those people were — most of them forcibly — taken up and deported from Poland, from Yugoslavia, from the Ukraine into Germany, to be forced laborers, slave laborers, to work at little or no wages to sustain the Reich until the war was finished. So that’s the first round in.

The second route into Germany comes at the end of the war in 1944, 1945. There were tens of thousands of Baltic citizens, citizens of what had been Estonia, Latvia and Lithuania, and after the German occupation, they had, in one way or another, collaborated with the occupiers, and when it became clear that the Germans were going to be defeated, that the Red Army was approaching, thousands of these Estonians, Latvians and Lithuanians crossed with the retreating German army back into Germany.

The third stream of foreigners were the Jews from the concentration camps. Hitler realized and the Reich officials realized in 1944, in 1945, that the Red Army was approaching. And they emptied out the concentration camps and the death camps in Poland and the Baltic regions, and they transported on what became death marches, thousands upon thousands of Jewish survivors back into Germany. The goal was not to bring them to safety in Germany, but to work them to death in underground factories in Germany, rather than gas them in Poland.

In the beginning of the war … some Poles and some Ukrainians … [believed] that Germany would eventually win the war. And they also knew that until the war was over, Poland and the Ukraine under German occupation were impoverished, barely survivable environments. Why not go to Germany? Why not be on the victors’ side? Why not make money for your family and live a better life there? What happened was within months of the first volunteers going from Poland and Ukraine on what was supposed to be six-month contracts, word circled back to Poland and to the Ukraine, to the hometowns of these volunteers, that they were being viciously mistreated. And after the six months passed and no one came back to Poland or the Ukraine, all voluntary relocation stopped. And from that point on, German labor officials threatened, kidnapped, [and] involuntarily deported the greatest number of Poles, Ukrainians and other Eastern Europeans, not as guest laborers, but as slave laborers.

The bulk of Polish Jews who survived the war survived it because as soon as the Germans came, they snuck across the borders into the Soviet Union, and the Soviets, who needed laborers to fight the war, moved these Jews into the far reaches of the Asiatic parts of the Soviet Union, where they were put to work and they worked through the war. When the war was over, the Soviets said, OK, you can go home now. And they supplied a quarter million Jews with transportation back to Poland.

When they arrived in Poland, these Jews were horrified at the anti-Semitism they found. They were not the only Polish Jews; large numbers of survivors of the camps who ended the war in Germany, as soon as they were able to walk, walked, tried to get on trains, find rides on trucks to go back to their hometowns to find out if anybody had survived. Other Jews came out of hiding and they returned to their hometowns to try to see if family had survived. And they, too, were horrified at the anti-Semitism. The Jewish Poles who had come out of the Soviet Union, who had returned from Germany when the war was over, the survivors realized that their only hope for the future lay in the American zone of Germany in the displaced persons camps there.

On the difficulty Jews faced when trying to immigrate to the U.S.

It took three years for Congress to accept any displaced persons into the United States. In June of 1948, Congress passes its first displaced persons law, but the law is written in such a way as to restrict visas or to prohibit visas for 90 percent of the quarter million Jews. The law is written that if you’re not in Germany on VE Day, you can’t get a visa. And a large number of the Jews were not there on VE Day, because they were in the Soviet Union or in Poland or in hiding. …

The law was passed and the law was written in large part by Midwestern Republicans and Southern Democrats who held the power in Congress in 1948 after a Republican victory in 1946. They did not want the Jews to enter the United States and they said it was not simple anti-Semitism. It was a Cold War stratagem. The opponents of Jewish migration said we can’t trust the Jews. Why? Because they’re Polish or they had spent time in the Soviet Union and large numbers of them are probably communist sympathizers or communist operatives, and we can’t let them into this country.

The law that was passed that made it almost impossible for the Jews to come in because they were [alleged] communists, had no such safeguards against Nazi war criminals and Nazi collaborators — many of whom did enter the country under the provisions of the Displaced Persons Act.

Sam Briger and Thea Chaloner produced and edited the audio of this interview. Bridget Bentz, Molly Seavy-Nesper and Meghan Sullivan adapted it for the Web.