Aussie Firefighters Save World’s Only Groves Of Prehistoric Wollemi Pines 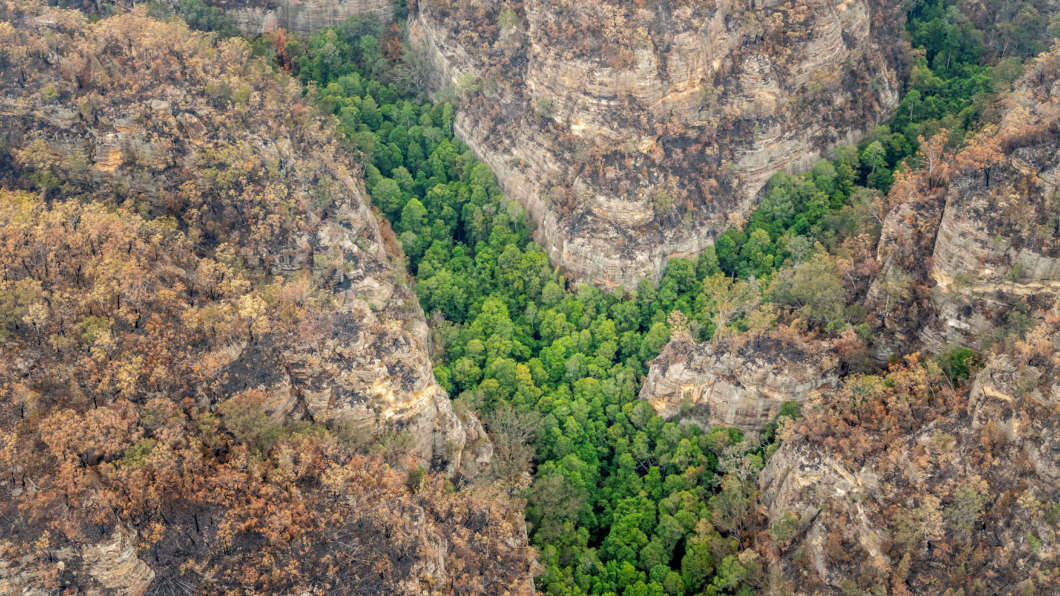 Fire swept through Australia's Wollemi National Park, but firefighters were able to save rare groves of prehistoric Wollemi pines.

It was a lifesaving mission as dramatic as any in the months-long battle against the wildfires that have torn through the Australian bush.

But instead of a race to save humans or animals, a specialized team of Australian firefighters was bent on saving invaluable plant life: hidden groves of the Wollemi pine, a prehistoric tree species that has outlived the dinosaurs.

Wollemia nobilis peaked in abundance 34 million to 65 million years ago, before a steady decline. Today, only 200 of the trees exist in their natural environment — all within the canyons of Wollemi National Park, just 100 miles west of Sydney.

The trees are so rare that they were thought to be extinct until 1994.

That’s the year David Noble, an officer with the New South Wales National Parks and Wildlife Service, rappelled into a narrow canyon and came across a grove of large trees he didn’t recognize.

Noble brought back a few twigs and showed them to biologists and botanists who were similarly stumped.

A month later, Noble returned to the grove with scientists. It was then that they realized what they had found: “a tree outside any existing genus of the ancient Araucariaceae family of conifers,” the American Scientist explains.

The trees are tall and can reach 130 feet high in the wild. They have thin, fragile bark covered in dark brown nodules that give them a sort of “bubbly” appearance. They bear cones that appear at the end of their branches, and the trees are monoecious, meaning that each plant has both male and female cones.

So when Australia’s wildfires started burning toward Wollemi National Park in recent weeks, firefighters from the parks and wildlife service and the New South Wales Rural Fire Service put a carefully planned operation into motion.

“This is a key asset, not only for the national parks, but for our entire country,” Matt Kean, New South Wales’ environment minister, said in an interview with the Australian Broadcasting Corporation.

Large air tankers dropped fire retardant around the pines. Firefighters set up an irrigation system around the trees to keep them wet. Specialist teams winched from helicopters down to the forest floor to make sure it stayed wet.

“If the fire did go through, we wanted it to be a cool burn as opposed to a hot burn to give them the best chance of survival,” Kean said.

The fire did sweep through the canyons, and through the groves where these trees have somehow survived for millions of years.

For a few days, the smoke was so thick that it wasn’t clear whether the plan had worked. “We all waited with bated breath,” Kean said.

At last the smoke abated.

A few trees had been charred by the flames, and two died. But the efforts had paid off. “Finally,” Kean said, “we were able to get in there and see that, thank goodness, the trees were saved.”

He says they knew they had to do everything they could to save the Wollemi groves.

“These are the only living Wollemi pines found anywhere on the planet in their natural environment. These pines used to cover the whole of Australia. Now they’re only found in a very small and secret location in New South Wales.”

That’s right: The exact location of the trees is a secret.

The government says the trees’ long-term survival depends on keeping their location confidential and on the public’s cooperation in not attempting to visit them. Visitors could introduce disease and might trample regenerating plants.

Kean thanked the firefighters for their efforts and acknowledged that while fire season isn’t new, it’s getting worse.

“We’ll always have bush fires in this country. There’s no doubt about that. But there’s no doubt also that the severity of this year’s bush fires is not like anything we’ve ever seen. And that’s due to climate change,” Kean said. “There’s a huge opportunity for us to lead the way in terms of tackling climate change and help the rest of the world decarbonize. There’s no better country on the planet better placed to do that than Australia.”

Authorities will study the species’ response to the fires to shape the response strategy in the future — a future in which fire will continue to threaten fragile ecosystems.