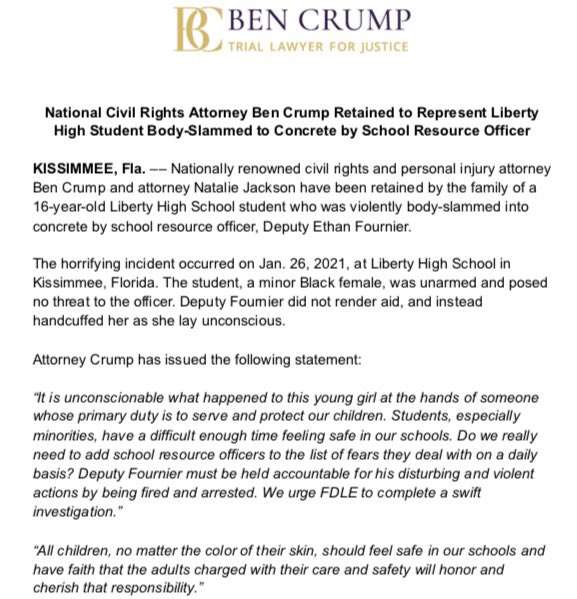 The family of an Osceola County high school student who was body slammed by a school resource officer has hired civil rights attorney Ben Crump.

Video of the incident at Liberty High School in Kissimmee posted on social media Tuesday, shows the teen apparently lose consciousness after her head hit the concrete when she was body slammed by the school resource officer.

The Osceola County sheriff says the officer was in the process of trying to stop the student fighting another student in the hallway.

Ben Crump tweeted that he and attorney Natalie Jackson have been retained by the family of the 16-year old student.

NEWS ALERT: @AttorneyCrump & @NatJackTweets to represent 16yo Liberty HS student in Kissimmee FL who was violently body-slammed by SRO Deputy Ethan Fournier. He must be held accountable for his disturbing and violent actions by being fired and arrested. pic.twitter.com/l5NH0MtGF1

“The student, a minor Black female, was unarmed and posed no threat to the officer,” said Crump in a statement.

“Deputy Fournier must be held accountable for his disturbing and violent actions by being fired and arrested.”

Fournier, who has been with the sheriff’s office 10 years, is on paid administrative leave while the Florida Department of Law Enforcement investigates.