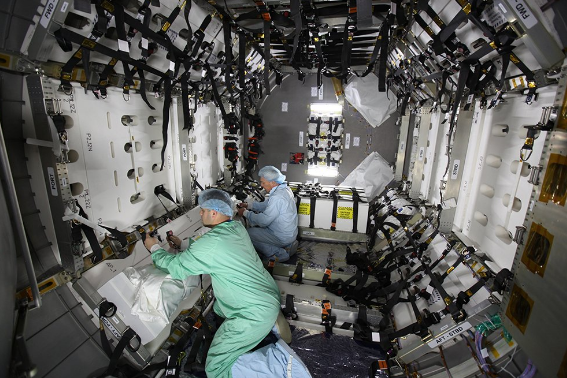 The Cygnus capsule, provided by private space company Orbital ATK, is packed with about 7,600 pounds of supplies and science for the International Space Station.

On the other side of the world, the Russian space agency plans to launch a rocket later this week, sending up two astronauts bound for the International Space Station. The launch scheduled for Thursday will deliver the new crew to the station in about six hours after liftoff.

Tuesday’s launch of supplies from Cape Canaveral is a part of NASA’s commercial cargo program, a partnership with private companies to supply the station. On board, a new experiment to grow plants in space.

The launch will give spectators a unique view of the launch pad — NASA is broadcasting the launch using 360-degree camera technology. Four fisheye-lens cameras are located at the pad, about 300 feet from the rocket. A computer in a blast-proof box will stitch together the images for a full, in-the-round view. There will be about a minute lag time.It will be shown on NASA’s YouTube channel .

The launch window opens at 11:11 a.m and weather remains favorable.