12 U.S. Service Members And Dozens Of Afghans Killed In The Kabul Airport Blasts 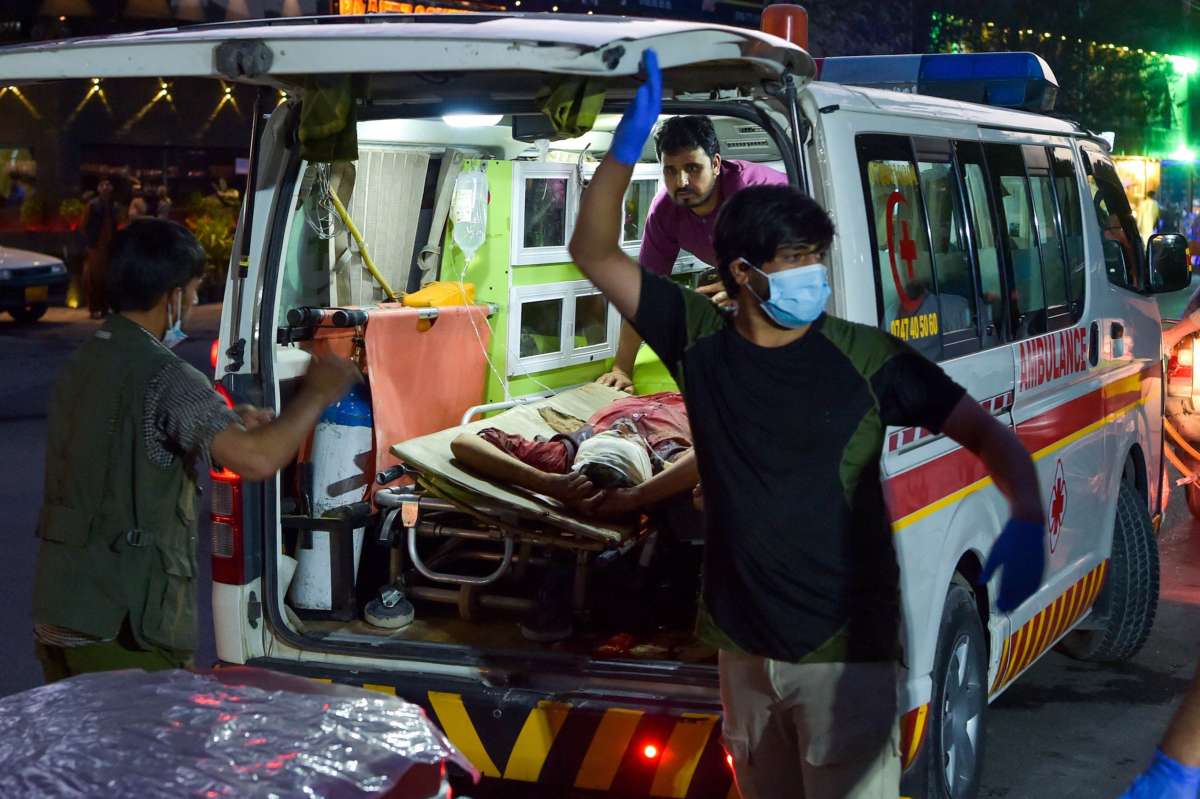 Medical staff load an injured man into an ambulance after two powerful explosions, which killed at least six people, outside the airport in Kabul, Afghanistan, on Thursday.
Image credit: Wakil Kohsar/AFP

Two explosions, one just outside the Hamid Karzai International Airport in Kabul and another at the nearby Baron Hotel, caused several casualties Thursday. The attacks came less than a day after the U.S. Embassy warned U.S. citizens to get out of the area. Here’s what we know so far:

ISIS-K, the ISIS affiliate in Afghanistan, has said it carried out the attack, according to AP and Reuters. The group posted the news on its Telegram channel, which NPR has not been able to independently verify.

Speaking at the Pentagon a while ago, Gen. Frank McKenzie said the attacks were believed to have been carried out by ISIS-K.

ISIS-K, as the group is known, has primarily operated in eastern Afghanistan and have been repeatedly targeted by the U.S. military over the past few years.

There have been more loud explosions in Kabul. Taliban spokesman Zabihullah Mujahid claims that they are controlled blasts by the “U.S. forces inside Kabul airport to destroy their belongings.” He said residents should not worry.

The White House announced that President Biden will deliver remarks on the terror attack in Kabul at 5 p.m. ET from the East Room.

An Afghan official tells The Associated Press dozens of Afghans were killed and another 143 were wounded in the attack outside Kabul airport.

At a Pentagon news conference Thursday, Gen. Kenneth McKenzie, the head of Central Command, said 12 U.S. service members were killed and 15 were injured in Thursday’s attack at the Kabul airport.

Many Afghans were also killed and injured, but McKenzie did not provide numbers. He didn’t blame ISIS-K, the Islamic State affiliate in Afghanistan, but said the threat from the group is “very real.”

About 104,000 have been evacuated from Afghanistan, including nearly 5,000 Americans, he added.

Two U.S. officials said at least 12 U.S. service members were killed in the Afghanistan bombings, including 11 Marines and one Navy medic, according to The Associated Press.

Officials say a number of U.S. military troops were wounded and warn that more casualties are expected to be reported.

German Chancellor Angela Merkel calls the attacks at the Kabul airport “vile” and says her country will continue to help those who want to leave Afghanistan.

The last German military aircraft has left Afghan airspace, ending the country’s mission there, German Defense Minister Annegret Kramp-Karrenbauer announced. “The safety of our soldiers has priority,” she said. “All are safe on their way home.”

A U.S. official has confirmed with NPR that at least four U.S. Marines were killed in Thursday’s attack.

The Pentagon says “a number of U.S. service members were killed” or wounded.

“We can confirm that a number of U.S. service members were killed in today’s complex attack at Kabul airport,” Pentagon press secretary John Kirby said in a statement. “A number of others are being treated for wounds. We also know that a number of Afghans fell victim to this heinous attack.

“Our thoughts and prayers go out to the loved ones and teammates of all those killed and injured,” Kirby added.

The Taliban have condemned the blast outside the airport and said the area where the blast took place was controlled by the U.S.

Taliban spokesman Zabihullah Mujahid, wrote in a tweet, “The Islamic Emirate strongly condemns the bombing of civilians at Kabul airport, which took place in an area where U.S. forces are responsible for security.”

He added that they were “paying close attention to the security.”

Separately, the former head of the Afghan government’s negotiating team and one of the leaders in negotiations with the Taliban, Abdullah Abdullah, also condemned the explosion.

What is happening in Kabul is a “full-fledged humanitarian crisis,” the Senate Foreign Relations Committee said in a tweet. “Our government must secure the airport & evacuate the many US citizens & vulnerable Afghans desperately trying to leave the country.”

Although U.S. forces have suffered casualties, there have been no reports of injuries or fatalities among British soldiers or government officials, the British defense ministry said. The ministry statement did not mention whether any British civilian trying to leave Afghanistan was hurt or killed.

Smoke rises from an explosion outside the airport in Kabul. Gunfire and at least one other bombing has taken place across the Afghan capital on Thursday.
Wali Sabawoon/AP

Biden met with his national security team Thursday morning, including Secretary of State Antony Blinken, Defense Secretary Lloyd Austin, Joint Chiefs Chairman Gen. Mark Milley, and spoke with commanders on the ground, and will continue to be briefed on updates on the evolving situation in Kabul throughout the day, the White House said.

The number of patients taken to Emergency, a highly respected trauma center in Kabul, is now around 60. In an earlier tweet, the nongovernmental organization said, “6 others already dead on arrival.”

This means the casualty count from the explosion is at least 60 wounded and at least 6 dead. U.S. officials earlier confirmed that three U.S. Marines were injured in the explosions.

The explosion outside the Kabul airport is “definitely believed” to have been carried out by the Islamic State group, a U.S. official told The Associated Press. The official, who spoke on the condition of anonymity, said the Thursday attacks were carried out by two suicide bombers and gunmen.

The main hospital in Kabul said it has received more than 30 patients. Six of them were dead on arrival, the hospital, run by an Italian nongovernmental organization, said in a tweet.

The explosion at the Abbey Gate of the Kabul airport was “a complex attack that resulted in a number of U.S. and civilian casualties,” Pentagon press secretary John Kirby said in a tweet.

He added at another explosion took place near the Baron Hotel, located nearby.

We can confirm that the explosion at the Abbey Gate was the result of a complex attack that resulted in a number of US & civilian casualties. We can also confirm at least one other explosion at or near the Baron Hotel, a short distance from Abbey Gate. We will continue to update.

President Biden was in the White House Situation Room with his top national security aides discussing the situation in Afghanistan when the explosion at the airport happened. Biden was briefed on the explosion, a White House official told NPR’s Franco Ordoñez.

Taliban fighters stand on a pickup truck outside a hospital as volunteers bring injured people for treatment after two powerful explosions outside the airport in Kabul.
Wakil Kohsar/AFP via Getty Images

According to a U.S. official, three U.S. Marines were wounded in the explosion at the airport gate. There may be at least a dozen people injured; their nationalities are not known right now.

The U.S. Embassy in Kabul says the blast took place at the “Abbey Gate” of the airport. It’s one of the entrances to the airport that the embassy had specifically asked U.S. citizens to avoid due to heightened fears of an attack.

A statement from the embassy Thursday says there are reports of ongoing gunfire. It adds that U.S. citizens “should avoid traveling to the airport and avoid airport gates at this time.”

Original story posted at 10:10 a.m. ET :
Pentagon press secretary John Kirby confirmed reports of an explosion outside of the airport in Kabul, Afghanistan, on Thursday.

“Casualties are unclear at this time,” he wrote in a tweet. “We will provide additional details when we can.”

The White House, State Department, Pentagon and U.S. Embassy in Kabul have all been warning of heightened threat from ISIS-K militants in Taliban-controlled Afghanistan to the ongoing evacuation effort there.

In a security alert on Wednesday, the U.S. Embassy in Kabul urged Americans outside the gates of the airport to leave the area immediately, citing security threats. Officials also cautioned U.S. citizens against travel to the airport.