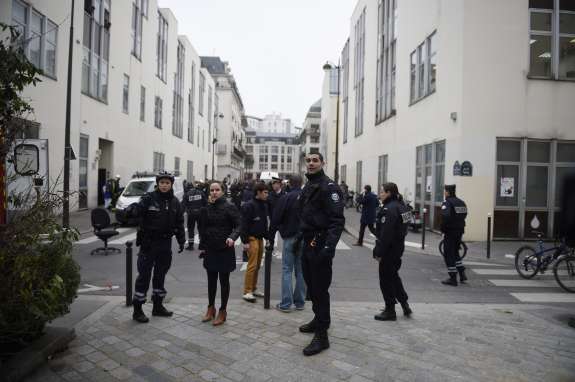 Police forces gather in street outside the offices of the French satirical weekly Charlie Hebdo in Paris on Wednesday, after armed gunmen stormed the offices.
Image credit: Martin Bereau

At least 12 people were killed during a shooting at the headquarters of the satirical Charlie Hebdo weekly in Paris, police say.

Speaking to reporters at the scene, President François Hollande said this was a “terrorist operation” in which journalists were “cowardly assassinated.”

“France today faced a shock,” Hollande said, according to a BBC interpreter. “Today I’m thinking about the victims.”

NPR’s Eleanor Beardsley reports that the men first shot and killed a police officer stationed at the magazine, then walked up to the second floor newsroom and opened fire.

Four of the magazine’s founding cartoonists were killed in the attack.

One video shown on French television shows two masked men leaving the building and then trading fire with another police officer. The officer is injured and one of the men stands above him and kills him at point-blank range. Eleanor says during the exchange, one of the men shouts, “We have avenged the Prophet Muhammad.”

Of the 12 killed, two were police officers and eight were journalists.

The gunmen then get into a black vehicle to escape. They went to the Paris suburbs where they abandoned their car and jumped into another.

A massive manhunt is now underway in the Paris area, with some school trips cancelled and some metros closed.

France has also beefed up its security posture, which Hollande said would help them apprehend those who perpetrated the attack.

Charlie Hebdo is a magazine that’s faced threats over its content in the past. Back in 2011, the weekly printed a drawing of the Prophet Muhammad. Afterward, its offices were destroyed in a petrol bomb attack.

This is a breaking news story. As often happens in situations like these, some information reported early may turn out to be inaccurate. We’ll move quickly to correct the record and we’ll only point to the best information we have at the time. Refresh this page for the latest.

According to France 24, The New York Times, The Wall Street Journal and USA Today the top editor at the newspaper, Stéphane Charbonnier, was killed during the attack.

According to the Journal, top editors were gathered for an editorial meeting when the gunmen burst into the office.

“A lawyer for the newspaper said that a number of prominent editors and cartoonists had been killed on Wednesday, including the cartoonists Stéphane Charbonnier, known as ‘Charb,’ and Jean Cabut, who signs his work ‘Cabu.’ He said that the cartoonists Georges Wolinski and Bernard Verlhac were also among the victims.”

In reporting his death, the French newspaper Le Monde points back to an interview with a defiant Charbonnier, after the paper had received threats.

“It’s perhaps a bit pompous, what I’m about to say, but I would rather die standing than to live on my knees,” Charbonnier told the paper.

Charbonnier’s last drawing featured a shabby-looking militant. It said, “Still no attack in France.” The militant responds, “Wait! We can send best wishes until the end of January.”

Demonstrations in solidarity are planned throughout France. Le Monde links to this map, showing where and at what time.

Parisians will march at the Place de la République for “freedom of the press, democracy, and the Republic.”

Meanwhile, on the Internet, Twitter has been innundated with posts tagged with #JeSuisCharlie, or I am Charlie.

Most express their support for freedom of expression and of the press. Others have posted pictures or drawings of their pens and pencils.

“Every American stands with you today,” Secretary of State John Kerry said moments ago from Foggy Bottom.

Kerry said that France is a symbol of democracy that has “sparked many revolutions of the human spirit.”

“Today’s murders are part of a larger confrontation,” Kerry said, “between civilization itself and those who are opposed to a civilized world.”

Despite today’s attack, Kerry said, civilization — with its core values of freedom of expression and a free press — will prevail.

“Brave and decent people around the world … will never give in to those seeking to destroy core values,” Kerry said.

The French Council for the Muslim Faith, which often acts as a liaison between the French government and the Muslim community, issued a statement condemning the attack.

“In an international context of political tensions fueled by delusions of terrorist groups taking advantage unfairly of Islam, we call on all those committed to the values ​​of the Republic and democracy to avoid provocations that only serve to throw fuel to the fire,” the group said. Faced with this tragedy, “… we call the Muslim community to exercise the utmost vigilance against possible manipulations from groups referred to extremists of any kind.”

President Obama called the attack in Paris “outrageous.” In a statement released by the White House, Obama added in part:

“France is America’s oldest ally, and has stood shoulder to shoulder with the United States in the fight against terrorists who threaten our shared security and the world. Time and again, the French people have stood up for the universal values that generations of our people have defended. France, and the great city of Paris where this outrageous attack took place, offer the world a timeless example that will endure well beyond the hateful vision of these killers. We are in touch with French officials and I have directed my Administration to provide any assistance needed to help bring these terrorists to justice.”

During a press conference, French Interior Minister Bernard Cazeneuve said the attack was perpetrated by three gunmen. This is one more than the two previously reported.

“All means will be carried out… in order to ensure as quickly as possible that we can identify the actors and arrest them so they are punished,” Cazeneuve said, according to a translation by CNN.

In January of 2013, Charlie Hebdo published what it called “The Life of Muhammad.”

According to the magazine editors, this was a non-satirical look at life of the prophet. But others took umbrage.

Al Jazeera reported at the time:

“‘To transform the life of the prophet of Islam into a cartoon is in itself a mistake,’ Ibrahim Kalin wrote on his Twitter account.

“‘Whatever the people at Charlie Hebdo say, this is a provocation.'”

Most Muslims consider making an image of Muhammad to be blasphemous.

Charlie Hebdo‘s last tweet, by the way, showed a cartoon of Abu Bakr al-Baghdadi, the leader of the so-called Islamic State.

Video being shown on French television shows a chaotic scene as people reacted to shots being fired in the middle of Paris.

One video shows two masked gunmen trading fire with a police officer. The officer is injured in the exchange, falls to the ground and one of the gunmen then stands above him and shoots him at point-blank range. The gunmen then jump into a black car to get away.

If you’re interested, France 24 has live, English-language coverage of the shootings.

Update at 7:39 a.m. ET. The Magazine Was Being Protected:

“This seems to be the terrorist attack that France has been bracing for.”

That’s the word from NPR’s Eleanor Beardsley who is now at the site of the shooting.

Eleanor tells our Newscast unit that France has been warning of this kind of attack for a while now, especially since it joined the U.S. effort against the Islamic State in Iraq and Syria.

Eleanor says that because of previous threats, the magazine’s office were protected, but it’s not clear how the gunmen managed to get past the extra security.

She describes Paris as being in shock. She says people from nearby office buildings have gathered just outside the police cordons trying to make sense of what’s just happened.

“Twelve people including two police officers were killed in a shooting at the Paris offices of the satirical weekly Charlie Hebdo on Wednesday, a police spokesman said in an update on the death toll.”

During a press conference, President François Hollande said the country had raised its security profile to apprehend the people who perpetrated the attack.

Hollande said that police had thwarted other terror plots in recent weeks.